Five years on from Vitalic’s last LP, Rave Age, we find the man who created high-energy club mainstay ‘La Rock 01’ in a more contemplative mood. For his fifth album, Voyager, Pascal Arbez-Nicolas has hit the brakes on his driving grainy electro sound that’s blasted dancefloors and opted to cruise through a disco cosmos of more low slung beats and hypnotic vocals.

Five of the ten tracks go heavy on the lyrics which proves successful with ‘Waiting for the Stars’ featuring David Shaw and ‘Use It or Lose It’ featuring Mark Kerr very enjoyable episodes on this cosmic journey - they both have a spark to their spacey sounds that melds nicely to the catchy choruses. There’s a sombre tone to Voyager on ‘Han’s is Driving’ on which Miss Kittin discusses the meaning of life with an artificial intelligence and closing Supertramp cover ‘Don’t Leave Me Now’ which each give a pause for reflection, but there is still that signature electro rumble throughout and he’s cranked out a couple of bass-face tunes that will bring dancefloors to life.

A cruise through a disco cosmos of low slung beats and hypnotic vocals.

‘Lightspeed’ and ‘Nozomi’ will rev up fans for his live shows while the dreamy ‘Eternity’ is a pleasure and opener ‘El Viaje’ sets the scene for this more considered fourth long player. ‘Levitation’ and ‘Sweet Cigarette’ are the weakest tracks, the former grinding along on a linear path without offering the uplift the title suggests while the latter’s cold vocal delivery and queasy subject prove unhealthy on the ears given the warm vibe felt by the album as a whole. Perhaps ‘Sweet Cigarette’

Vitalic’s original concept for Voyager was to be his most disco ever, yet not overtly danceable - a concept that changed over the course of the two year composition. The influence of disco orginators such as Moroder, Cerrone and Patrick Cowley are felt, and it works well as a 42-minute intergalactic odyssey with its highs, lows, synths and singers making for his most eclectic collection. Vitalic is known for his vibrant, high octane live shows - it’ll be fascinating to see how he mixes in the change of pace launched on Voyager. 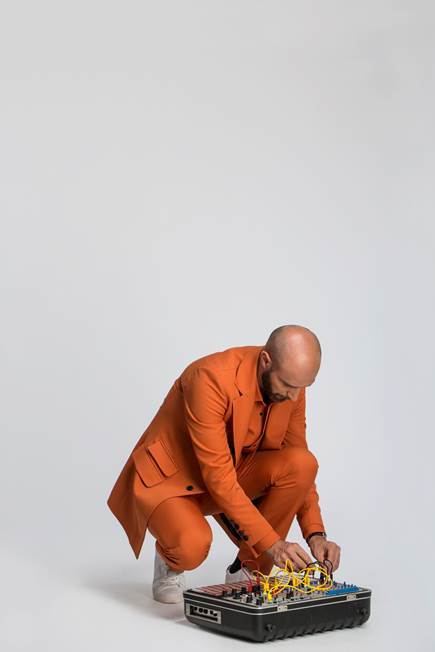