Bristol indie-pop band Stay Lunar’s latest release is ‘Dreaming That I’m Not In Love’ - a dreamy journey through relationship insecurities and inescapable nightmares that cling to you for days. We caught up with vocalist and guitar player Harry to find out more.

Lyrically, the songs are quite dark, I write a lot about the realness of relationships and my own personal mental battles, as well as tough situations that people I know have been through

First up, tell us bit about yourselves - who are Stay Lunar, and what were you doing before making music together?
Hey! Stay Lunar is: George on lead guitar, Tom on keys/synth, Charlie on drums, James on bass and Harry (myself) on vocals/guitar. Before making music we can collectively agree that we weren’t doing much.. mainly playing football and/or video games and working or studying!

With the exception of Tom and I being very close friends previously, the rest of us didn’t know each other before this venture - sadly we don’t have one of those ‘we were all best mates at high school’ kind of stories, but we are all best mates now. There’s something quite nice about us all having very different paths that have led into one.

Who did you take inspiration from?
Personally I (Harry) took a huge amount of inspiration from a band called Little Comets, they do pretty much everything themselves, from recording and mixing, to artwork and videos, etc., plus their music is brilliant and they’re lovely people. Tom is very inspired by bands like The Strokes, Forth Wanderers and Hippo Campus and George is a huge fan of King Krule, Black Midi and DIIV.

As for the others, they have incredibly diverse tastes, but Charlie says his biggest inspirations are Tame Impala and The Smiths, and James mentioned The Strokes and Arctic Monkeys.

Why the name ‘Stay Lunar’? What do you stand for?
Stay Lunar was originally a song I was writing. The chorus was ‘will you stay lunar just for me?’ and it was about asking someone to be there for you during the tough nights. Essentially ‘stay lunar’ to me just means staying up during the late (lunar) hours, as this is something I’m quite familiar with.

I really struggle to sleep early, most nights I’m still writing songs or scheduling emails for the band at 2am, as I can’t do much while I’m at work during the day. When we needed a band name we went through a bunch of different ideas; Stay Lunar was the most unique/catchy one we could agree on - it just felt right.

How would you describe your musical style?
Genre-wise, indie-pop and dream-pop, but we definitely have some elements of rock in there. Our live shows have quirky and fun songs, alongside some heavier, darker songs in the set. We like to mix it up so it’s not just the same thing for 30-45 mins.

Lyrically, the songs are quite dark, I write a lot about the realness of relationships and my own personal mental battles, as well as tough situations that people I know have been through. We really want to make people dance, but also feel something deep, and hopefully we can make that happen someday.

If you could collaborate with any living artist, who would you love to work with?
For me it would be Little Comets. We were lucky enough to support them at their show in Oxford last year, which was a real dream moment for me. Tom would work with The Strokes, George with King Krule, Charlie with Tame Impala and James with Arctic Monkeys. 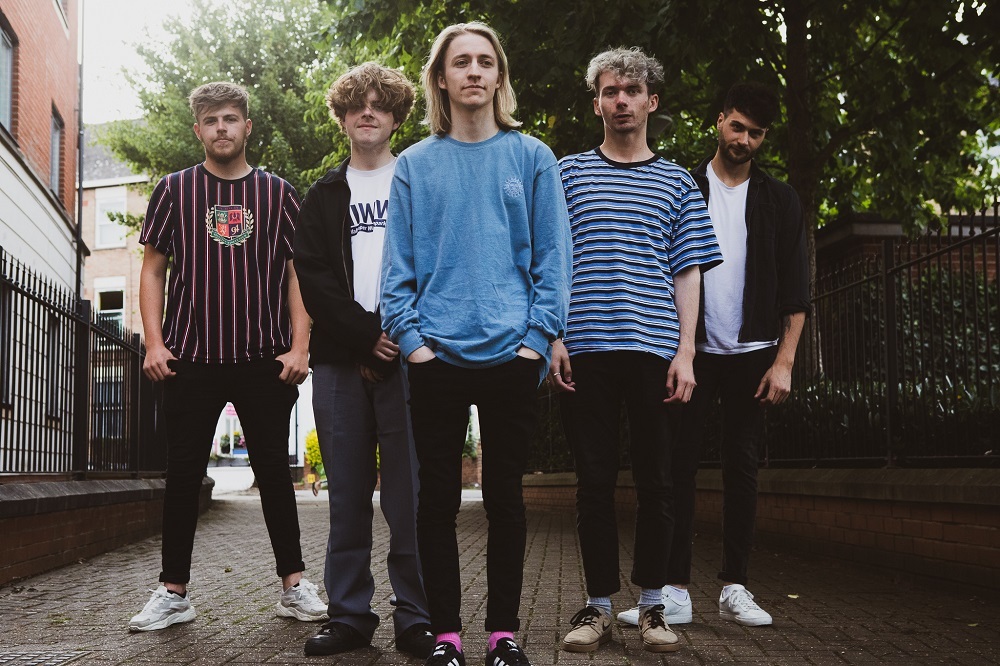 Tell us about your new single ‘Dreaming That I’m Not In Love’. What’s it about?
Funnily enough, the song is as the title describes - I had a few dreams in the days leading up to writing it, where my girlfriend was leaving me for someone else, and that really affected me despite not being real. I guess it was my own sub-conscious insecurities about entering a new relationship and thinking that I wasn’t good enough, which I’m sure a lot of people can relate to.

When did you write it and where did you record it?
I wrote the first version of the song and recorded a demo in the same evening between Christmas and New Year - I then sent the demo to the guys and our producers, who all liked it. We barely rehearsed the song as we were in the studio in mid-January and it all came to life there. We record with the awesome guys at Sugar House in St.Helens.

How does ‘Dreaming That I’m Not In Love’ represent your style?
I think what’s really nice is that this song represents where everything originally started; my bedroom. When I had the original idea it felt like it was too different to other Stay Lunar songs, but when it all came together it felt like that was exactly the kind of music we came together to create - it’s like dreamy bedroom-pop, magnified. I think this song fits our aesthetic and lyrical style really well, and we hope that this song can be the catalyst for bigger things in the future.

What are your hopes for ‘Dreaming That I’m Not In Love’?
The excitement we feel for this release is on a different level to that of previous releases - We really hope that people like this track as much as we do, because we’re so proud. We have already received support from our local BBC Introducing show, and have had a few radio plays before the song was even released, which is really awesome. We hope that we can build on this early momentum and reach as many ears as possible.

What are your other plans for 2020? Can we catch you on tour?
We were in talks about sorting out a small tour, which will hopefully consist of a few shows all over England. But with the current Coronavirus situation, we’ve had to cancel our upcoming shows and delay the tour plans.

We’ve rescheduled a headline show in Bristol from this month to June 27th which was to celebrate the single release this month, and we hope that the second half of the year will be very busy for us with shows around the country. We’re writing a lot, so after our next new track that drops this summer, we’ll be hopefully recording some more.

In the meantime, plenty of live streams and interaction on social media, that’s the best place to find us and keep up to date with what we’re up to!

Finally, if you could go back in time and give yourselves one piece of advice, when would it be and what would you say?
For me, it would be to have more confidence in myself and not to rush the writing process. Also as the make-shift manager of the band, I would go back and tell myself to be far more organised for releases, etc.

As a band, we’d tell ourselves to focus more on finding a producer who wants to invest in us and loves the music that they’ll be working on, rather than just finding someone to hit record that can’t put their heart into what we’re doing. It took us a while to find this and when it all came together we had a sudden realisation that we had been wasting time and money previously.

Listen to ‘Dreaming That I’m Not in Love’ on SoundCloud below. For news and tour dates go to staylunar.com.