Seven Red Lions is an alternative indie rock band. The members from different parts of the world found each other in London, starting the project in 2015. Their most recent single was ‘Citizen’ so we caught up with the band to learn more about their formation and the release.

‘Citizen’ brings a positive message, with encouragement, hope, and freedom to move forward in everyday life.

First up, tell us bit about yourselves - who are Seven Red Lions, and what were you doing before making music together?
We are Seven Red Lions, an alternative indie rock band based in London. The band was formed in 2015 by David Lion (guitarist and lead singer) later in the same year, Sara Priegue joined the band as a backing vocalist and in 2018 she moved to the bass, as the previous bassist came back to his country, in 2016 Christopher Coronel joined the band as a keyboard player.

From a very early age, we all showed a great interest for the music, David Lion from Mexico City, start to play drums at 15 and later we learned guitar because he wanted to create songs; Sara Priegue from Portugal loved to sing and play the ukulele in school groups and in 2017 she started to studying bass guitar, and since then she can’t stop playing it; Christopher Coronel from Mexico City, big fan of MTV star to get interest in learn guitar when he was 11 and later he learned ho to play piano.

Who did you take inspiration from?
London has a big role in the process of creation of our music because it’s a city full of art represented in many different ways: the live music, the events, the structures, the architecture, the colours and the mix of cultures. All this is a big inspiration for us.

Musically bands and artists like The Cure, Smashing Pumpkins, Tal Wilkinfield, Tame Impala, Chet Baker, and many others are a big inspiration for us.

Why the name ‘Seven Red Lions’? What do you stand for?
It was inspired by a collage of three important elements in life: numbers, colours and animals…

The number ‘seven’ because it symbolises every positive and valuable matter in existence like prosperous life, happiness, renewal, and perfection. It is also a powerful number that represents a connection to the universe.

The colour ‘red’ because it is a color that symbolises action, confidence, and courage… is also a colour that is related to emotion ranging from passionate, intense love, etc. The ‘lions’ because they symbolise the courage, justice, power, strength, wisdom, pride, dignity, etc.

How would you describe your musical style?
We play alternative indie rock however we’re open to other music styles like blues, funk, jazz, etc… When it comes to creating process we are open and flexible to how the song naturally takes us. 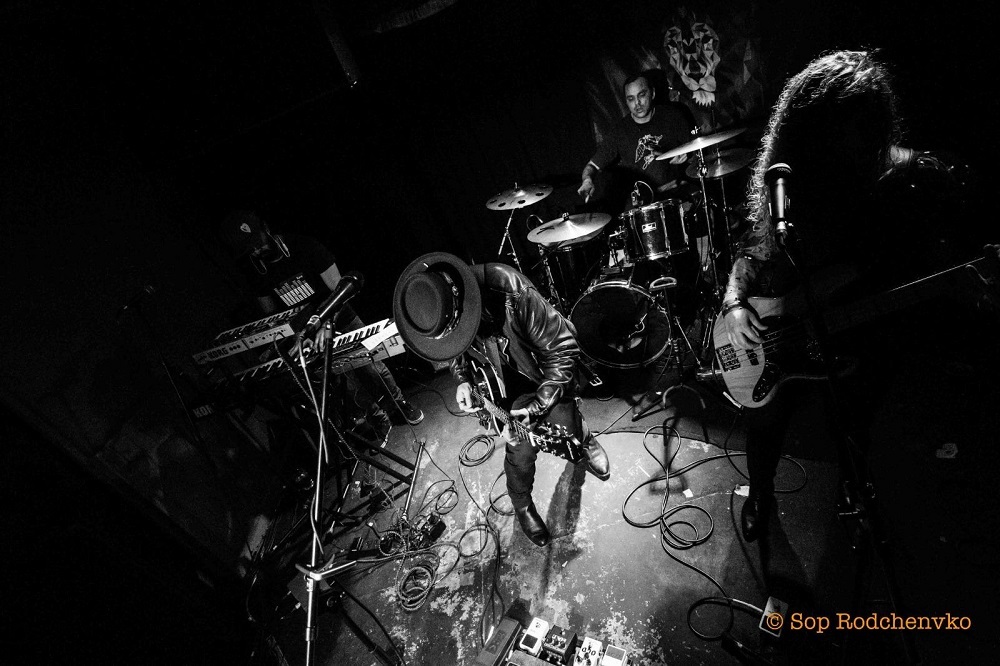 Your last single was ‘Citizen’. When did you write it and where did you record it?
‘Citizen’ was written in 2013 (sketch) by David Lion, it was taken in 2018 to finalize the lyrics and the structure and recorded in 2019 at Cafe Music Studios in London.

How does ‘Citizen’ represent you?
When we wrote this song we thought about the problems, pressure, stress, and loneliness which sometimes is felt by all. ‘Citizen’ brings a positive message, with encouragement, hope, and freedom to move forward in everyday life. We like to approach real subjects that affect all of us somehow at one point in life and hope to let the listeners know, that we are in the same boat with them and no matter what is thrown our way, we are gonna fight it head-on.

Tell us about the Citizen Photography Project. What’s it all about?
For the artwork of the single, we worked with photographer Sop Rodchenvko, so we decided to create alternative covers. For this session, we pick 12 Londoners and he asked them to share with us some stories of their life in London, inspired by their stories we build up the session… Feelings like happiness, anger, sorrow, empowerment and more were projected on these photos and honestly, the result is fantastic… We invite you to visit our social media by searching Seven Red Lions band and confirm yourself.

What response did ‘Citizen’ get as a piece of music, and as a wider project?
Honestly, it has been so far our best track recorded and it’s the more streamed one on our Spotify, so we are happy for the results, this encourages us to move forward.

What are your plans for 2020 in terms of new music? Can we catch you on tour again?
We are working on some new music which hopefully will be part of our first studio album recorded this year, and we are back on road our first gig this year will be at Dublin Castle on the 28th of April, we invite everyone to join us.

Finally, if you could go back in time and give yourselves one piece of advice, when would it be and what would you be?
Would be when we decided to be musicians… and the advice would be: “always believe in yourself and fight for your dreams, because if you live your dreams you will have many satisfactions and surprises that will fill your heart with happiness… Don’t rush, everything happens in the right moment with right people, enjoy every single moment”.

Listen to ‘Citizen’ on SoundCloud below. For news and tour dates go to sevenredlions.wixsite.com.