West London singer/songwriter Marrius first played the piano, then converted to guitar. Now he collaborates with a musicians in the UK, US and Europe, experimenting with different genres and production styles to help him create his sound. We caught up with him to chat about new single ‘Back To Strangers’.

The track is about the destructive process in relationships and the results that follow: “I’ll keep changing, you won’t know me”.

First up, what got you into music?
I’ve always been surrounded by music as I have a very musical family. My parents both work in the music industry and my uncle manages a music shop in New York. My parents started bringing me to festivals when I was 3 years old. Throughout the years I started learning guitar, piano, singing, songwriting to eventually production.

Were there any particular bands or artists you took inspiration from?
Yes so many. I love how Jack Garratt or Jai Paul incorporated guitar with electronic music. I’m also a big fan of Hip Hop production from Kanye West or The Weeknd. I’m a massive fan of the production on the AM record from Arctic Monkeys and the Built The Glass record from Chet Faker.

How would you describe your style?
I grew up listening to so many different genres of music and that’s what you can hear in my latest EP. I’ve been constantly experimenting with different genres and production styles to help create a four-track bible mix of modern electronics with a soulful pop edge. You can call it alt-RnB or indie-electro-pop.

Why ‘Marrius’?
Simply because my name is Marrius and I don’t know any artist by this name.

If you could collaborate with any living artist, who would you choose?
It would have to be Paul McCartney, Stevie Wonder, Max Martin, Dr Dre or Quincy Jones. They have all brought amazing music to the culture and changed our lives forever with timeless music. I feel I would learn so much collaborating with them. 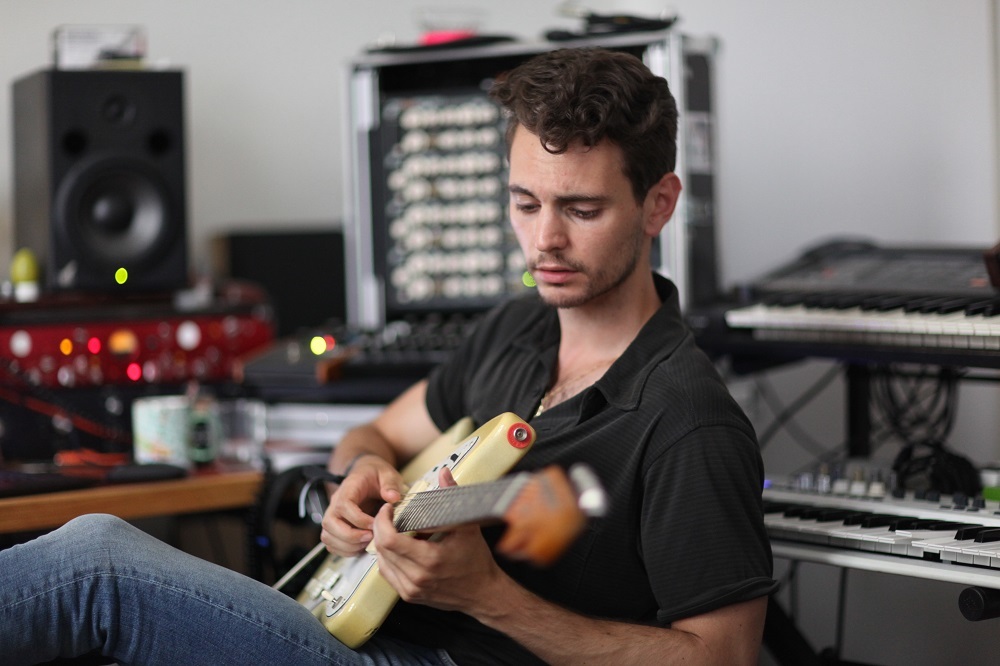 Tell us about your new single ‘Back To Strangers’. What’s it about?
The track is about the destructive process in relationships and the results that follow: “I’ll keep changing, you won’t know me”. When there’s a bad break up, you just wish your ex was a stranger and not part of your life anymore, physically or mentally. But I take it far in the song where it becomes an obsession where I’m ready to change every single thing to forget her.

When did you write it, and where did you record it?
I wrote this track in May this year in London and recorded it in Paris later in June. I’ve been collaborating with a producer based in Paris called Vincent Choquet who’s been able to bring this great analogue electronic sound to my records.

How does ‘Back To Strangers’ represent your style?
This song is a mixture of soul, indie, electronic, RnB and pop which is what I’m all about! Experimenting by taking risks, mixing genres and finding your own sound!

What are you hopes for ‘Back To Strangers’?
I want to keep songwriting as much as I can hoping every new track can open new doors to a new audience.

You’re playing London venue The Waiting Room on November 8th, what can we expect from that show?
I’ve been seeing live gigs from a very young age and did a Bachelors degree in live performance. The live show is very important to me! I have a new amazing trio who will be performing with me, a keyboardist, a drummer and i’ll be on guitar and vocals. There might be a couple surprises to expect for the live show…

What other plans do you have for the rest of 2019 and into 2020?
I already have a couple songs ready to go for 2020 and I am currently writing new material so you can definitely expect new songs soon after my EP is released on November 8th.

Listen to Marrius ‘Back to Strangers’ on Spotify below. Marrius plays The Waiting Room in London on Friday, November 8th. For news and further tour dates go to Marrius’ Facebook page.