Hailing from both Watford and Birmingham, Liar Liar is Darcy, Thom, Chris and Benji. They aim to make music for the soul, and we caught up with them to find out more.

We stand for earnestness, writing real songs, reflecting on real feelings whilst trying not to take ourselves too seriously.

First up, tell us a bit about yourselves - who are Liar Liar, and what were you doing before making music together?
Darcy: We’re literally just four people, in our twenties, who by chance have become a band that happens to gel really well. Ben and Thom are twins, so they’ve been making music together for years, but Chris and I came into the picture more recently. I’m a trained actress, so I’ve been working in that realm for a little bit. Ben is also a filmmaker (and the creative genius behind all our visual content). Chris was in another band until we stole him. With Thom it’s always been making music. He’s the only one who actually studied it…

Who did you take inspiration from?
Chris: We have a wide range of influences; fickle friends, PVRIS, Francis and the Lights and Billie Eilish to name a few. Lots that help us write and think about the way we perform.

Why the name ‘Liar Liar’? What do you stand for?
Thom: I wish there was some magical story around the band name but I simply picked a couple of good looking words related to to a recognisable saying (Liar Liar, pants on fire). Other than that I believe we stand for earnestness, writing real songs, reflecting on real feelings whilst trying not to take ourselves too seriously.

How would you describe your musical style?
Thom: I only recently discovered the term ‘Alt Pop’and I think that suits us down to the ground. It’s pop music through the lens of indie ideals, not bound by the more cynical aspects of pure pop, and by that we say what we think is real to us and chuck in a couple of weird turns in the music where it feels right.

If you could collaborate with any living artist, who would you love to work with?
Darcy: For me it has to be either the Billie Eilish/Finneas team or Stevie Wonder. Genius work, genius people. 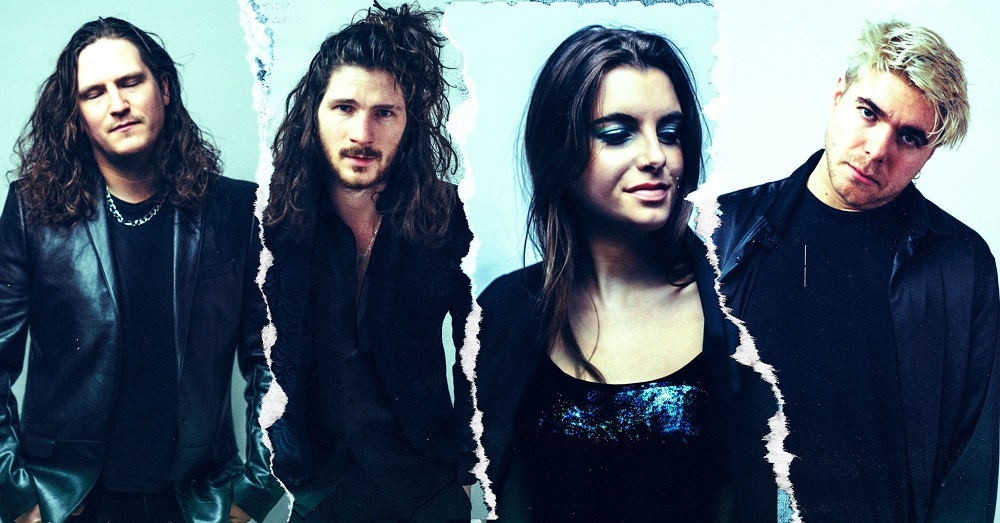 Tell us about your most recent release ‘Young’. What’s it about?
TP: ‘Young’ is a love letter to british binge culture. It’s about one of those nights we’ve all had, where you take things further than they otherwise should and behave in ways that we both regret and celebrate all at once. It’s about losing yourself to the flow of the night…whilst being incredibly pissed.

When did you write it and where did you record it?
TP: I actually wrote it a few years ago before Liar Liar had formed. I was still pretending to be Frank Turner at open mic nights and wanted to write a ‘story’ style about things I saw whilst working in bars. We recorded it with Ady and Lee at Sugarhouse in St Helen’s. They’ve been instrumental in making us sound good…this is the fourth time weve collaborated with them and every time we learn more about our sound than we ever could have whilst producing on our own. They really understand the synth-pop vibe that we’re going for.

How does ‘Young’ represent you?
Darcy: I think ‘Young’ is something we can all relate to, that feeling of never wanting a night out to end, and never having to go back to normality. I think part of us always looks for that little escape once in a while, it’s definitely something I relate to on a personal level.

What are your hopes for ‘Young’?
Chris: Big things, we’re hoping at least to get national radio play, to get some recognition from blogs and magazines and genuinely just take things in the right direction to get us heard by as many people as possible, I mean world domination of pop music would be great but we’re modest so we’ll settle for now.

What are your other plans for what’s fast becoming a crazy year?
Chris: Definitely to keep releasing songs and to get gig ready so when the pandemic is over we can gig gig gig. We’ve really missed playing the shows. But for now it’s our live stream isolation gigs like Warchild on the 24th of June and keeping writing and recording.

Finally, if you could go back in time and give yourselves one piece of advice, when would it be and what would you say?
Darcy: stop caring about what other people think so much, and stop worrying, it’s a waste of time.

Listen to Liar Liar on SoundCloud below. For the latest, go to Liar Liar’s Facebook page.