Jamila & The Other Heroes

International psychedelic funk-rock band Jamila & The Other Heroes recently released their new album Sit El Kon (The Grandmother of the Universe). We caught up with them to chat about their origins, the new release and why they’d travel back to 2016 if they could.

We call our style ‘Psychedelic Desert Funk’ with political content.

First up, tell us bit about yourselves - who are Jamila & The Other Heroes, and what were you doing before making music together?
We are five Berlin-based musicians from Manywhere who have overcome political and musical boundaries. Jamila, the front singer of the band, was born in East Berlin on 9 November 1989, the day the wall came down. Manywhere not only refers to the different geographical origins of the band members; who are from Syria, Palestine, Poland as well as East and West German, but also refers to the inspirations you find in our music.

Percussionist Salam Alhassan and bass player Bilal Hammour fled from Syria to Germany in 2015 and bring their contemporary as well as folkloric musical influences from the Levant region into the mix. Apart from making music, Salam is also an illustrator and designed the EP CHANGE of the band. Bilal is studying music at the prestigious Jazz Institute Berlin (JIB), where drummer Kuba Gudz from Poland, one of Berlin’s most versatile and sought-after drummers, also learnt his craft.

Guitarist Leaon Sánchez met Jamila while studying cultural sciences in Hildesheim. His style is inspired by Afro and Latin American music, which he collected in South America and also plays as DJ Bouillabaisse.

Besides the band project Jamila also teaches at University and consults cultural institutions all over Germany in the field of Racism Critical Cultural Work. She also creates art with her feminist performance collective WALTRAUD 900; books a weekly live music series at Rotbart Berlin and for 10 years organised the ARAB* UNDERGROUND program at Fusion Festival and beyond. All five band members have one thing in common: their youth was heavily influenced by rock and hip hop music.

Why the name ‘Jamila & The Other Heroes’? What do you stand for?
Jamila is the name of frontsinger Al-Yousef’s grandmother who died in 1953 in Sarra, a small Palestinian village in the mountains of Nablus. Listeners can hear her and the many other unheard voices of strong women worldwide pulsate through Jamila’s powerful vocals. They too are part of the Other Heroes. The overall message of our album Sit El Kon is to animate our listeners to connect and join forces: We all can become heroes. Discover your super powers and make the world a better place every day!

While racist agitation is increasingly becoming acceptable in many circles of our society, we have made it our mission to break down prejudices towards people with histories of migration and asylum and make the abundance of cultural diversity more visible and audible. For us music is not free of politics! Given that in particular women of colour are underrepresented in the music industry, we want to set an example for emancipation and empowerment. This is why we turn into heroes and are determined to advocate in our lyrics and sounds for a more just and fair society.

How would you describe your musical style?
We call our style ‘Psychedelic Desert Funk’ with political content. Let yourself be carried away by an incomparable sound of psychedelic guitar riffs, vibrating on a warm and earthy fundament of wavy bass runs and Arab percussion sounds, as well as heavy hip hop und rock influenced drum beats.

Jamila’s at times soft and at other times emphatic voice harmonically weaves itself through dense and eclectic yet always optimistic sounding compositions. Her emancipatory lyrics invite listeners to show mutual empathy.

The tracks on the album are in English and Arabic and feature stories about migrating families and feminist empowerment (‘Farashat’); of a dream in which Jamila meets her grandmother in the universe (‘Sit El Kon’); of letting go of loved ones who have passed on without saying good bye (‘Abu Dub’); of journeys to heal the inner child (‘Inner Child’); of proximity and distance dynamics in families (‘Khalas! The Umbilical Chord’); of love in times of capitalism (‘Aliens in My Bed’); and of the search for solidarity and a community, in which we no longer have to be alone with our feelings and where we support and inspire each other (‘Fight Club’).

The dance floor we create is a breeding ground for people to meet and practise togetherness - our response to the currently operating exclusion mechanisms of our time. 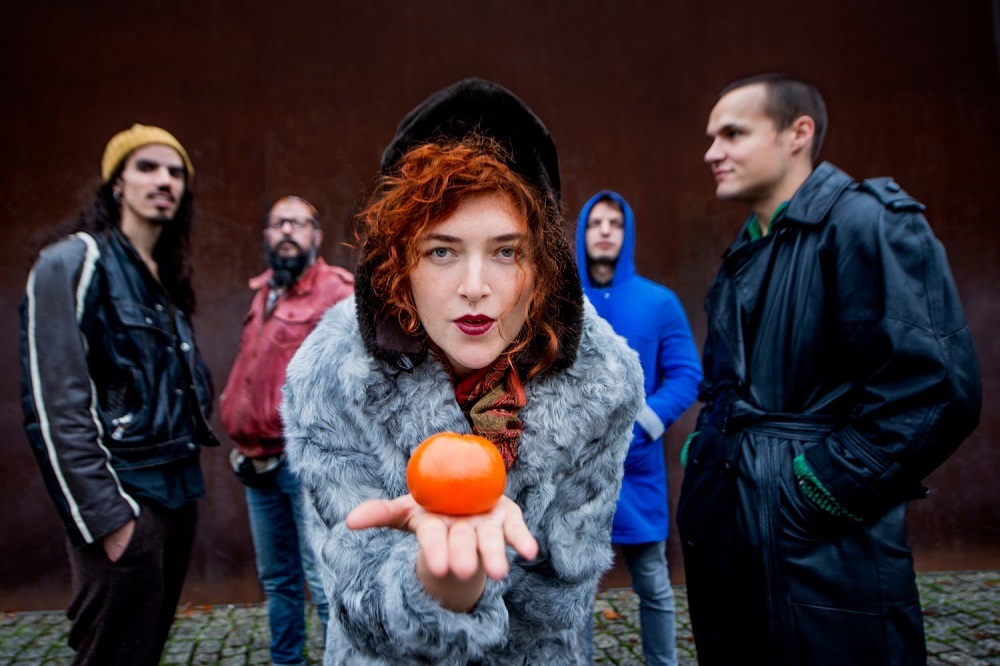 Your album Sit El Kon (The Grandmother of the Universe). When did you write it and where did you record it?
Most of the tracks of the album came to live between 2017 and 2019. The album was recorded analogue on an old Otari reel to reel tape recorder in the Berlin based recording studio Big Snuff. Big Snuff’s sound engineer Richard Behrens provided his collection of treasures from the 60s and 70s, thus allowing the band to produce the unmistakeable sounds of Moog synthesizer, a supro guitar ramp which amongst others Led Zepellin used for their recordings. The band also used the Telefunk Echo Mixer for voice effects.

How does Sit El Kon represent you? What’s with the name?
‘Sit El Kon’ is arabic and means the ‘Grandmother of the Universe’.

Sit El Kon derived from a magic dream of Jamila. Since her childhood she had nightmares of persecution and war - a possibly passed on trauma by her refugee family. In one dream she encountered her Palestinian grandmother Jamila - whom she was named after but never met. She died when her father was one year old. Nobody knows how she looked like, but in the dream Sit Jamila sits cross-legged like a yogi in the Universe with long orange hair. She soothingly speaks to her granddaughter, taking her out of the war zone on earth by catapulting her like a rocket to the cosmos.

There Jamila flies through colorful galaxies until her racing heart calms down and she could wake herself up. The song is a call for a physical as well as emotional home. When Jamila asks her grandmother Jamila “Where is our home?”, she answers: “The Universe”.

Can you talk us through each track?
Our debut album Sit El Kon (The Grandmother of the Universe) collects our own compositions in English and Arabic around socio-political topics as well as very personal narratives of the struggle to survive in the neo-liberal era.

‘Farashat’ (Butterflies) is an arabic lullaby, co-written by Rasha Hilwi for Dino Weisz’ movie “Farasha“. A child asks their parents where they came from and where they are going to. They answer: “Since long ago we were butterflies, flying from the flower to the tree. Then our wings were burned. But as the wind loves us, he blew us far. Now we can hopefully rest and grow wide wings to make us travel in our wide world and to be part of the orchard. And we will tell the flowers our stories - about the hope we are raising.“

‘Abu Dub’ is inspired by the Middle Eastern folklore ‘A3la dal A3una’ - a song about the lovers who left without saying goodbye. Percussionist Salam Alhassan wrote a poetic Mawwal describing his loss of Syria, a place that could be so beautiful with better leaders - a place he himself has left as a refugee without saying goodbye.

‘Fight Club’ draws exactly that bow of fighting personal as well as political depression by creating moments of togetherness and being aware that our privately experienced emotions are part of a bigger system and not just our personal „problems“.

‘Sit El Kon’ derived from a magic dream of Jamila. Since her childhood she had nightmares of persecution and war - a possibly passed on trauma by her refugee family. In one dream she encountered her Palestinian grandmother Jamila - whom she was named after but never met. She died when her father was one year old. Nobody knows how she looked like, but in the dream Sit Jamila sits cross-legged like a yogi in the Universe with long orange hair. She soothingly speaks to her granddaughter, taking her out of the war zone on earth by catapulting her like a rocket to the cosmos. There Jamila flies through colorful galaxies until her racing heart calms down and she could wake herself up. The song is a call for a physical as well as emotional home. When Jamila asks her grandmother Jamila “Where is our home?”, she answers: “The Universe”.

‘Inner Child’ is an introspective investigation of painful childhood and youth memories saved in the body; a call for the acceptance of who we were in the past and who we are now; of our ‘otherness’ in diverse, transcultural societies.

‘Khalas! The Umbilical Chord’ talks about the struggle to find the right distance and closeness with your beloved family. It describes the deep wish to be loved unconditionally by the ones who brought you into life: “Khalas! Stop labelling me. Khalas! I wasn’t born to please. Khalas! I just wanna be me. Khalas! I love you and it’s time to be free.

What are your hopes for Sit El Kon?
We want to travel with our music - mentally as well as physically. We hope to play in many different places in this world and meet people to exchange our stories, support our struggles and share a moment of togetherness.

What are your other plans for 2020? Can we catch you on tour?
In May we tour all over Germany. In summer we will play diverse festivals in Europe and in Autumn we plan to return to the Middle East and North Africa. We already have been playing in Tunis, Amman, Ramallah and Haifa. Now we plan on a tour in Egypt and VAE. You will find all dates on our website jamilaandtheotherheroes.com.

Finally, if you could go back in time and give yourselves one piece of advice, when would it be and what would you say?
2016 - at the time of founding the band. Jamila was still working for the Ministry of Arts and Science to build up a Welcome Board for refugee musicians. She always had organized programs around music and arts, but never dared to go full in with her own music. Only a burnout would lead her way, so the piece of advice is: “Trust your intuition to be a musician that has meaningful stories and music to share”.

Listen to Sit El Kon on SoundCloud below. For news and tour dates go to jamilaandtheotherheroes.com.