Following a change in name and image, J A X X has released his first EP Ghosted under his new name. We caught up with J A X X to chat about his EP and lead single ‘Trouble’.

There’s something for everyone in my music, it’s really varied but all flows together nicely too.

First up, tell us about yourself - what got you into music?
Well I first discovered that I enjoyed playing music when I got to high school in around 2011. We never did music class at my primary school so my first experience with it was high school and I just loved that I could actually make music myself! I took up drum lessons and that’s when I discovered rock and metal music which is my true love really, I’ve been in bands now for about 7 years and I can’t imagine a life where I’m not making music and performing.

Were there any particular bands or artists you took inspiration from?
Oh yeah, loads. I mainly listen to heavy rock and metal music and most of the gigs I go to are to see really heavy bands or pop punk kinda bands, so I’m pretty sure that type of music plays a part in my inspirations.

From my first EP, the first track ‘Skin’ has a heavy guitar in the chorus and a little bit of shouty/unclean vocals, as do a lot of my songs actually haha. I also take inspiration from artists that make similar music to me, so we’ve got people like Oliver Tree, Post Malone, Lil Peep, Joji, Hobo Johnson, they all play a huge part in my musical inspiration.

I’m a massive fan of each of those artists and listen to them a lot too alongside the heavier stuff so it all kinda gets mashed up together when I’m drawing inspiration from music haha.

Why ‘J A X X’?
When I started making music I was called ‘A Guy in a Band’ and released my first EP and follow up single under that name. I just decided that the name was a bit of a mouthful and kinda sounds like a joke, so I made the decision to change up my whole image and brand and come up with a simpler name that rolls of the tongue a bit better, haha.

My real name is Jack so it’s just like my name apart from the last two letters being replaced with X’s. I guess it means the name relates more to me as a person. I added the spaces between the letters to make it stand out on a page more, ‘J A X X’ catches your attention more than ‘Jaxx’ haha.

How would you describe your musical style?
I always class my style as alternative emo pop. I just made that up really but my music is kinda like pop, I do a lot of rapping so there’s lots of hip hop influences in there too, but many songs are quite deep and explore different feelings so it’s pretty emo too. There’s something for everyone in my music, it’s really varied but all flows together nicely too.

If you could collaborate with any living artist, who would it be?
Damn that’s a really hard one. One of my favourite vocalists of all time is Corey Taylor from Slipknot/Stone Sour so having Corey feature on a track would be completely insane for me, his voice really is something else and every track he features on is incredible. I reckon it could really work too, it could really add something to my music.

I’m also a huge fan of Dani Filth from Cradle Of Filth, he’s another amazing vocalist but in a very different way haha. He recently featured on a Bring Me The Horizon song and it was awesome, having him do some vocals on a J A X X track would be something else! 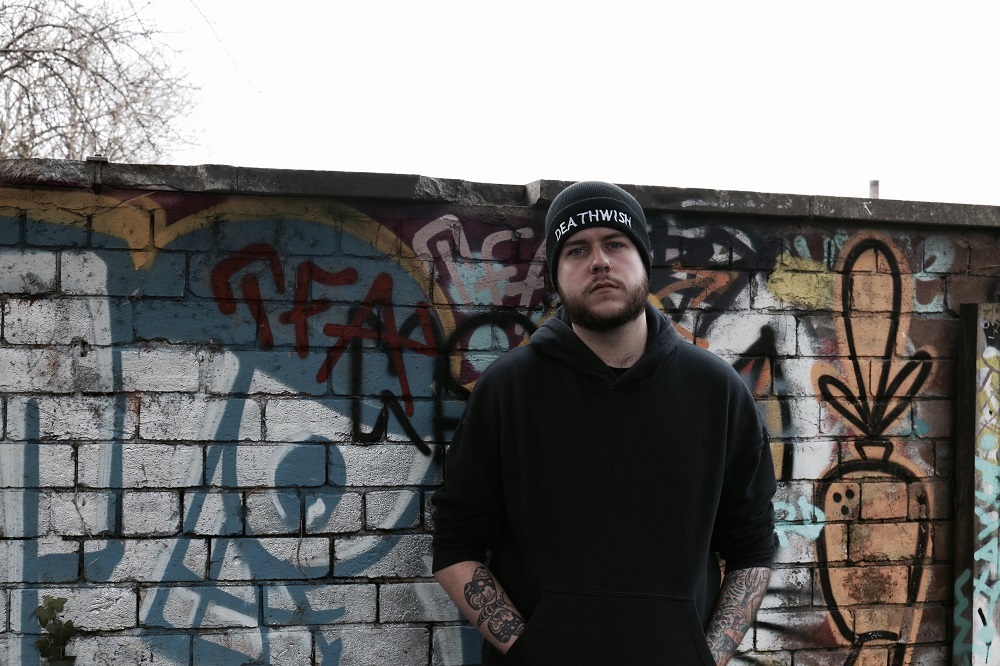 Tell us about your new single ‘Trouble’. What’s it about?
‘Trouble’ is probably my favourite song from my new EP Ghosted. It’s about how me and my friends are always skint and always wanting to go out and have fun and trying to make it work with the little cash we have between us haha. I wrote it so other people who are in the same situation can hopefully relate to the words and know they’re not alone and that the struggle is real but it’s all cool and it all works out in the end.

When did you write it and where did you record it?
‘Trouble’ probably took the longest to write to be honest. When I’m writing songs, I think of an idea, record it and just leave it for a while until I think of a new idea to add to it, so I probably wrote the start of it in July 2019, and then I only finished in February this year I think. Because I do all the recording and writing myself, I always go back to songs and change things and often have to stop myself and just say that it’s finished or else I would never finish a song haha.

How does ‘Trouble’ represent your style?
It’s a pretty tame song actually compared to some of my tracks. It’s nice and light hearted and a bit dancey and so are a lot of my songs. Some of my tracks are a bit more hip hop influenced and a bit darker and sadder, but overall I think ‘Trouble’ is a good representation of my sound yeah haha. I also released a music video for ‘Trouble’ which is has the same vibe of the song, I made the video with the hopes of making people laugh and smile and I think it fits the song really well.

‘Trouble’ is the lead single from your new EP. What can you tell us about it? What are the other tracks?
Yeah, so my new EP is called Ghosted and it’s got six new tracks on it. It’s a bit different from my first EP that I released in 2018, it’s a lot more varied and a bit more mature in theme if that makes sense. As I’ve gotten older and gained more life experience, it’s changed how I write music.

Ghosted covers issues like confrontations, anxiety, changing yourself, reflecting on your past and your choices, but in an artistic interpretive sort of way. It’s a fun record and all the songs offer something else to the listener but maintain a good flow.

What are your hopes for ‘Trouble’ and the EP?
I’d just love for people to listen to it in all honesty. Having people listen to what I’m writing and making is more than enough reward for creating it haha.

How’s 2020 looking in what’s becoming a crazy year?
Well it’s been an extremely rocky start and doesn’t really look like it’s gonna get better anytime soon. I had a tour booked for the week of the release but obviously that’s had to be cancelled due to the virus which was really disappointing.

Just riding it out at the minute and playing it by ear. Would be great to get a new tour booked at the end of the year when this has all passed to make up for the release tour being cancelled but we’re just going to have to see how life plays out at the minute.

Finally, if you could go back in time and give yourself one piece of advice, when would it be and what would you say?
I’d simply tell myself to believe in myself and my ideas and not to listen to all the trash talk that people give me because I can’t let stuff like that hold me back.

Haters gonna hate as they say, it’s more important to just do what I love and let people think what they want about me and what I do!

Watch the video for ‘Trouble’ on YouTube below. For news go to J A X X’s Facebook page.