Hollow Doors is an unsigned band from Scunthorpe. They’ve recorded, produced, mixed and mastered their latest single ‘Going Regal’. We caught up with the band to find out more.

For us, this is fun, we get to try new things, learn what we like, what works and what people enjoy listening to.

What started as two bedroom musicians slowly crept out into the local music scene; “We’ve been playing in our local town since June 2017 where we started playing covers and little by little we built up an amazing fan base who are incredibly supportive. We dipped our toe in the water with four originals last year which was a crazy learning curve but we were overwhelmed by the response we got and so we took on a real challenge; which was to write, record, produce, mix and master six songs (all independently) at the beginning of 2020, which we are now currently in the midst of.

If all goes well our next goal will be to write, record, mix and master one new song every month!

Who did you take inspiration from?
‘Going Regal’ is definitely in a similar vein to early Arctic Monkeys; it’s very boisterous and energetic and it’s heavy, in a sense, similar to Royal Blood.

Why the name ‘Hollow Doors’? What do you stand for?
We’d die of cringe if we told you where it came from, that will have to stay a secret and go to our graves with us. What we will say is that the amount of times we’ve been asked if we were a shitty tribute act to The Doors is actually pretty slim!

How would you describe your musical style?
Pending… haha! It’s still being shaped at the moment, we all take different influences (i.e. Connor loves Bob Dylan, Bruce Springsteen, Jamie T; Josh is an avid listener of Red Hot Chilli Peppers, Kasabian, Don Broco; Corey has a tattoo of Blink-182 on his shoulder and is a huge fan of NoFX and Slipknot; Callum idolises Stone Roses, Oasis, Royal Blood) and I think you can almost hear them in these releases.

For us, this is fun, we get to try new things, learn what we like, what works and what people enjoy listening to. All we can hope for is, that as we write more, we’ll hone in on all of these aims and find a sound that we can call our own.

If you could collaborate with any living artist, who would you love to work with?
Connor: “The one and only Bob Dylan. Sorry Bruce…”

Callum: “I’d say Royal Blood. Love the fat bass and the drums in their songs.”

Josh: “It would be the Red Hot Chili Peppers because they’re able to create so many different dynamics within their songs and and portray any emotion in their writing, so you don’t know what sound would come out next.”

Corey: “Fat Mike from NOFX, for sure, because that guy knows how to write a very meaningful song about not to commonly talked about subjects” 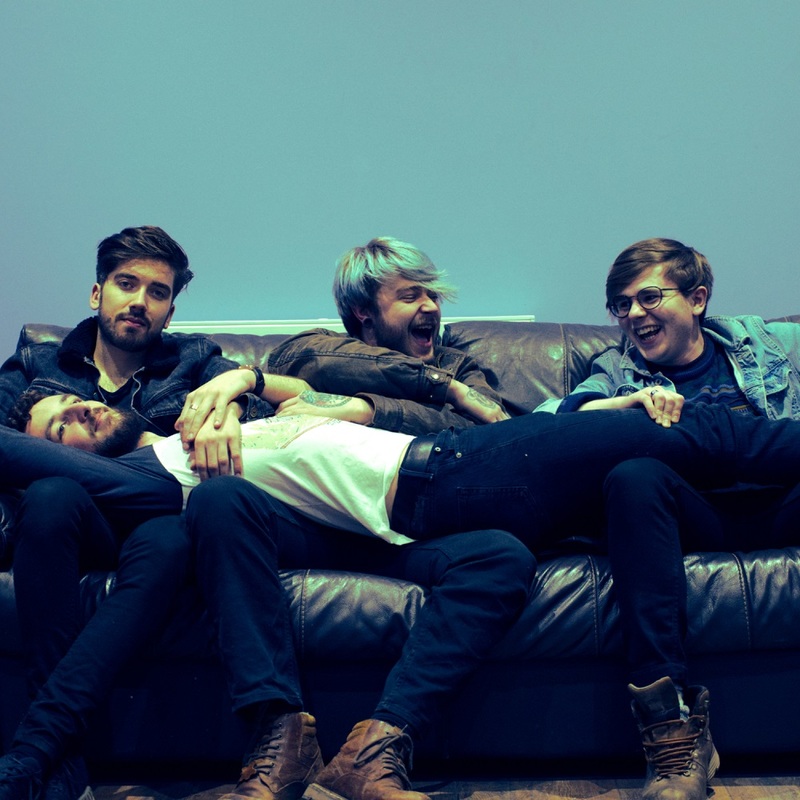 Tell us about your new single ‘Going Regal’. What’s it about?
It was written by Connor and it’s a stab at people who pretend to be something they’re not. “It was just a riff that had me hooked, I had the idea in my head for over a year - but never put pen to paper - i’d pick up the guitar, play the riff over and over and then put it back down and let it gather dust. I don’t know what happened but I realised, if I didn’t put words to it, it’d be stuck in my head forever. I’ve got no idea where the words came from but I felt that such a rough/fierce sounding song should have lyrics just as cutting.”

When did you write it and where did you record it?
The lyrics were finally put down in December 2019 and it was recorded in January 2020 in a studio that we’ve been building with our own hands. Everyone’s chipped in but the credit for the studio has to go to our beloved friend Nige’ who is the 5th member of the band (Nige’ has been with us from the start, he’s never missed a gig, has built us also sorts of crazy contraptions, sorts the sound and lights out for us, gets us to and from gigs and keeps us in check) without him we’d be lost.

The studio is still a work-in-progress and it’s taken a lot of time, energy and help from friends but we’re getting closer and closer to the finish line and we cannot wait till we do!

How does ‘Going Regal’ represent you?
It’s a memory for all of us and means something completely different to each of us. It reminds us of how far we’ve come and how far we’ve got to go, everything worked on and learnt on the way. It was also the first Connor ever mixed, it’s by no means perfect, but we’re happy with how it came out and it’s a proud achievement showing what we can do when we get our heads together and buckle down.

We also did a little video series on twitter, explaining the songs in 10 seconds, here’s Callum’s worldly view on ‘Going Regal’

What are your hopes for ‘Going Regal’?
All we can hope for is that people enjoy the song, we’re just happy to be sharing it with people now after we spent so long working on it and the other five songs, for us it definitely feels like a stepping stone to bigger things. The more we can reach people with this song, the more it’ll spur us on to keep making music, play bigger gigs and work on new ideas!

What are your other plans for what’s fast becoming a crazy year?
First off we’ve got two singles left to release, then we’re going to write a lot more music (release 1 new song every month), play a load more gigs (when things return to some normality), go further afield (maybe a few festivals) and of course finish our studio!

Finally, if you could go back in time and give yourselves one piece of advice, when would it be and what would you say?
Callum: “Would have told myself to start learning to play drums sooner and put more into it at a younger age”

Corey: “Learn to say no to people and things in life and stop worrying that saying no will upset people even though saying yes will upset you!”

Watch the video for ‘Going Regal’ on YouTube below. For news go to hollow-doors.com.