HI SIENNA mix shimmery guitars with husky vocals to create feel-good, catchy tunes. They have played shows across Manchester including a headline performance at The Deaf Institute and supporting Scouting For Girls at the O2 Ritz. We caught up with the band to find out more about their history and debut single ‘Favourite Things’.

Our style is alternative-pop… and full of surprises.

First up, tell us bit about yourselves - what led you teaming up as HI SIENNA?
We’ve all been keen musicians from a young age really - but only Si (our drummer) actually studied music. We’re the perfect mixture of Manchester and Leeds (if such a thing exists!) and although are all very different share the same love for humour and music.

We met on a sort-of dating website for musicians called Join My Band. PoppyJo turned up to a rehearsal room to three random lads on a dark, wintery night on a Salford industrial estate 2 years ago… and never looked back. Good job we’re sound and not serial killers or it could have gone down a lot differently haha

Who do your take inspiration from?
We are four very different people with four very different music tastes. From Prog Rock to indie to jazz, to House - but we manage to meet in the middle with our inspirations; taking influence from artists such as Bjork, The XX, Blondie, Foals and of course, all the classics - Stone Roses, Led Zepp… even WHAM! - what’s not to love?

How would you describe your musical style?
Our style is alternative-pop… and full of surprises.

Why the name ‘HI SIENNA’?
Nobody ever tells you how hard it is to come up with a decent band name! We tossed and turned with ideas for a really long time. PoppyJo knew that she wanted to incorporate her hometown of Manchester without being too obvious or cliche.

We were at a wit’s end one night after a practice at PoppyJo’s, when she just looked up at the blueprint of the old Hacienda Night Club she has framed in her living room. She immediatley had this giant grin on her face, started sribbling stuff on a piece of paper and after she’d removed the ‘d’ ahem, HI SIENNA was born. Doesn’t make a lot of sense to other people - but it makes every sense to us.

If you could collaborate with any living artist or band, who would you choose?
Prince would have been unbelievable… but I don’t think PoppyJo would have been able to sing due to her uncontrollable sobbing. So we’ll go with Talking Heads. Combine PoppyJos dancing, with David Byrne’s and you’ve got the next best duo since toast and butter. Imagine recreating that live video of the Stop Making Sense album? Unreal! 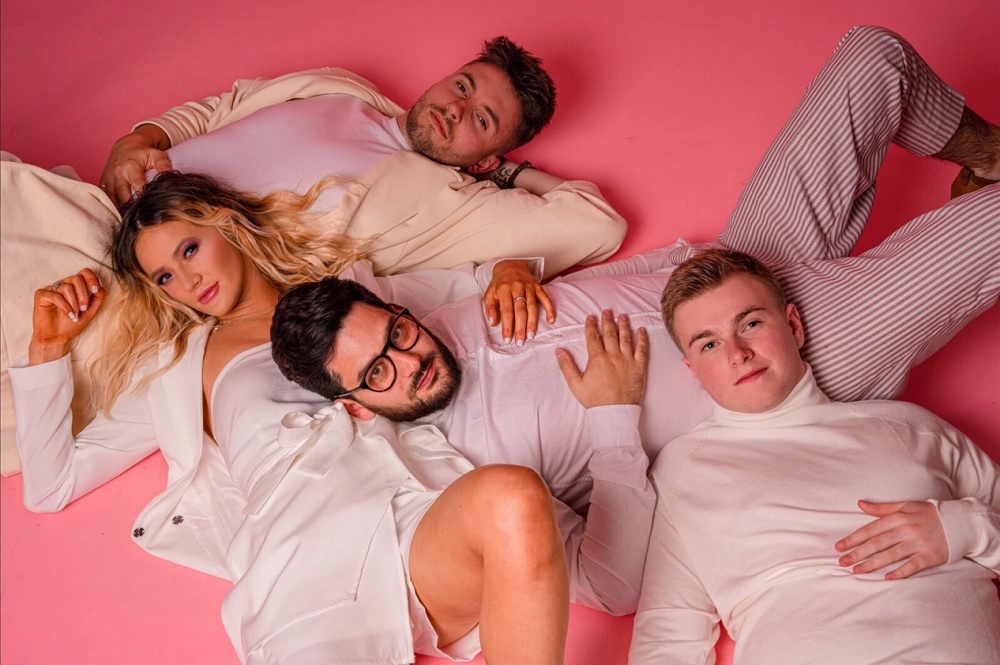 Tell us about your debut single ‘Favourite Thing’, what’s it about? What are its themes?
‘Favourite Thing’ is a bit of an unconventional love song. Although to begin with it seems obviously about someone just calling someone else their ‘Favourite Thing’ - it’s actually sort-of a desperate plea about someone being so insanely in love with the other person that they would do literally anything. ‘Let me in, Let me out, don’t mess about, you’re my favourite thing/Shut me up, Hear me out, I’ll run around - you’re my favourite thing!”

When did you write ‘Favourite Thing’, and where did you record it?
We wrote ‘Favourite Thing’ a year ago. It took us about the same time to record it (which seems ridiculous as it’s only two driving bass notes haha) but we wanted to get the sound absolutely right, especially for our debut single.

How does ‘Favourite Thing’ represent your style?
‘Favourite Thing’ is just everything us. It’s a punchy-Charlie-bassline, mixed with gorgeous noodly guitar, shuffly-cool-as-a-cucumber drumming and rough-sandpapery style vocals that all come together to just make one big banger. It’s a big happy bundle of energy just like us lot. (when we’re not hungover)

What are your hopes for ‘Favourite Thing’?
We just hope it gets the recognition we think it deserves and gets people listening to what else we’ve got in the bag too. We’re not bothered about money or fame in that sense - we just like making music and want it to be good enough for people to enjoy! Music has got us all through good and bad times and if our music could do the same, even maybe inspire people - then that’s enough for us.

What other plans do you have for the year and into 2020? Where can we see you on tour?
We have three more cracking singles lined up, with plans for a few launch gigs in and around manchester to get them going. We also wanna be doing festivals next year so a few applications have been sent for those - we’ll have to send you an update on that one - but If we’re playing Glasto you’ll definitely know about it 😂😂😂

Finally, if you could go back in time and give yourselves one piece of advice, when would it be and what would you say?
Be. Patient. We’ve spent a lot of the last year rushing to try and get stuff finished just for the sake of being able to get out there and really make an impact - quite often it’s meant things going wrong or having to do things again because they weren’t done right the first time. But when you take a step back and revisit things, everything is a lot easier to analyse. Also.. HAVE MORE FUN.

We’ve been so serious lately and all of our time has been going into prepping this release that we’ve been forgetting to actually enjoy it..and go for pints! So now we all have calendar reminders entitled ‘PINTS’ at least once every two weeks… it’s a very important part of band life.

Watch HI SIENNA in action on YouTube below. For news and tour dates go to hisiennaband.com.