Hey Bulldog is Rob Manton (guitar/vocals), Matt Parry (bass/BVs) and Ben Howarth-Lees (drums). They’ve just released new single called ‘Death & Greed’, a grungey riff-based track. We caught up with them to find out more about their history and their latest single.

‘Death & Greed’ is probably our heaviest song to date, and shows another side of what the band is capable of.

First up, tell us bit about yourselves - what led you teaming up as Hey Bulldog?
It started out as me (Rob) recording an ep by myself at home, completely self-produced and playing everything. That got some good reviews and airplay on BBC 6 Music and then I started getting gig offers so started to put a band together. Finding the right people took a fairly long journey before everything clicked as a unit and the three of us have been playing together now for six years.

Who do you take inspiration from?
Anybody who is good and passionate about something. Whether that’s music, film, comedy, Art, football.

How would you describe your musical style?
Fundamentally we’re a three-piece garage-rock band, but we definitely like to expand our horizons out of that, always progressing and not afraid to take risks.

Why the name ‘Hey Bulldog’?
Before the Beatles made it onto all the streaming services, ‘Hey Bulldog’ was very much a forgotten about Beatles track. For me, it has all the elements of how I wanted my music to sound, great riff, great chords, great melody, cool guitar solo.

If you could collaborate with any living artist or band, who would you choose?
It would be good to work with somebody like James murphy from LCD Soundsytem or Jamie Hince from The Kills and see what elements they could bring out of the band. 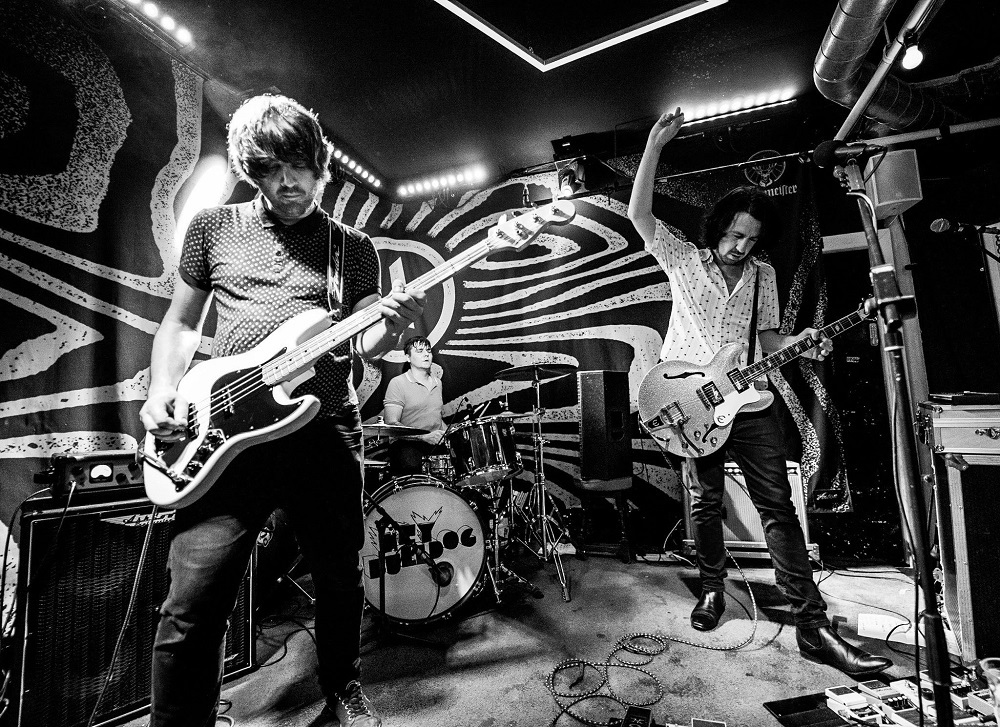 Tell us about your new single ‘Death & Greed’, what’s it about?
I guess it’s a fairly political song about the way people choose to live their lives.

When did you write ‘Death & Greed’, and where did you record it?
I probably came up with the riffs and chorus about a year ago, we recorded it in Sheffield in February this year. Aside from battling our way through the snow to get home, it was a really good recording experience as it was done in a big open plan studio.

It meant we could pretty much play it exactly the same as we would live or in a rehearsal with the amps loud and in the same room. I think that really comes across in the energy of the track as it feels like a live one-take band performance.

How does ‘Death & Greed’ represent your style?
It’s probably our heaviest song to date, and shows another side of what the band is capable of. It’s really nice to be able to play songs like this live as well as more atmospheric instrumental stuff too

What are your hopes for ‘Death & Greed’?
It’s our first ever vinyl release that we’ve put out on limited edition 7 inch, so its been great to see us sell so many on pre-order and that we’ve sold over 90 percent just a week after it dropped. With everything we put out we just want as many people as possible to hear it.

What other plans do you have for the year and into 2020? Where can we see you on tour?
We’ve got a really cool gig in my local church St Clements in Chorlton Manchester and a trip to Liverpool with Deja Vega coming up this month, then we’ll round the year off with a Xmas celebration gig at Night People in Manchester on Saturday, December 21st.

Next year we’ll be recording the last few tracks for our debut album then playing plenty of live gigs including our biggest ever headline gig. So stay tuned for announcements.

Finally, if you could go back in time and give yourselves one piece of advice, when would it be and what would you say?
It would be hard to pick just one bit of advice. Maybe I’d tell myself to trust my instincts and that you are good enough.

Listen to ‘Death & Greed’ at Bandcamp below. For news and tour dates go to hey-bulldog.com.