Fragile Creatures is Adam Kidd (vocals, guitar), Aaron Neville (vocals, keyboards), Tom Alty (lead guitar, backing vocals), James Crump (drums) and Adam Whittles (bass). Following their Heart Beat EP back in spring, the band are gearing up to release their second album Punk Yacht with a series of self-recorded, psych-pop singles. We caught up with Adam to find out more.

We’re a band who love making music and playing together, and we’ve kept doing that despite how difficult it can feel sometimes, especially if you’d love the world to notice what you do!

First up, tell us a bit about yourselves - who are Fragile Creatures, and what were you doing before making music together?
Fragile Creatures are myself, Adam Kidd (vocals, guitar), with Aaron Neville (vocals, keyboards), Tom Alty (lead guitar, backing vocals), James Crump (drums) and Adam Whittles (bass guitar). I’ve been making music with Tom since I was 15 and he was 13 - our first band was called Rift, and Aaron joined us on-stage in our last ever show.

We recruited Whittles and Crump when I was offered a publishing development deal when I finished uni. I’d recorded an album with my band at the time, which has never been released. It got me this deal, but I was told to sack the band!

Who did you take inspiration from?
When I was a kid Manic Street Preachers, Radiohead and Blur were the bands I was most inspired by, along with bands from the past like The Beatles, David Bowie or The Clash. Aaron, who also writes the songs, had more of a pop background. I know he was majorly into Michael Jackson, Prince, and loads of Motown.

Our inspiration is constantly evolving though. Lately I’ve been loving Vulfpeck and everything associated with them: particularly Theo Katzman’s solo stuff. I’m also really into sing-songwriter stuff like Father John Misty, or Andy Shauf.

Why the name ‘Fragile Creatures’? What do you stand for?
Fragile Creatures as a name came from a song I wrote, which appears on our first album. The song was written while I was dealing with my parents divorce, and thinking about how it would affect my much younger sister. In the lyrics I am talking about the science of humanity, the fact our heads are too big for the birth canal meaning we are born weak and we weaken our mothers, which created the need for a family unit, and throws that into the context of modern families which are so often pulled apart. What do we stand for? It’s an interesting question.

Unlike the early Manics, who I adored, we don’t come with a manifesto. We’re a band who love making music and playing together, and we’ve kept doing that despite how difficult it can feel sometimes, especially if you’d love the world to notice what you do! Politically we lean to the left, as individuals, and that is often apparent in what I write about, but as a band we’re more interested in making music we enjoy than pushing an agenda. If I was pushed for one I’d like to contribute to making the world a kinder and more tolerant place.

How would you describe your musical style?
Punk Yacht is the title of our second album and I guess it’s also an attempt to describe what we do. We love pop and melody and clever musical ideas, but we’re not virtuoso’s and we don’t have the budget to create (or really the desire to create) a mainstream pop product. We’re a band of contrasts. I love hard hitting rock music as much as I love smooth, melodic textures.

We’ve been throwing these contrasts together from day one, but now more than even we are producing in a DIY way, and working completely independently. By punk I mean that DIY spirit, and openness to a wide variety of music - much more The Clash than The Sex Pistols. By yacht I mean the big clever pop ideas of bands like Toto or 10CC. We want to be both at the same time.

If you could collaborate with any living artist, who would you love to work with?
Personally I would love to record a song with Josh Tillman, incredible voice, incredible lyrics, and the melancholia that touches his music is right up my alley. 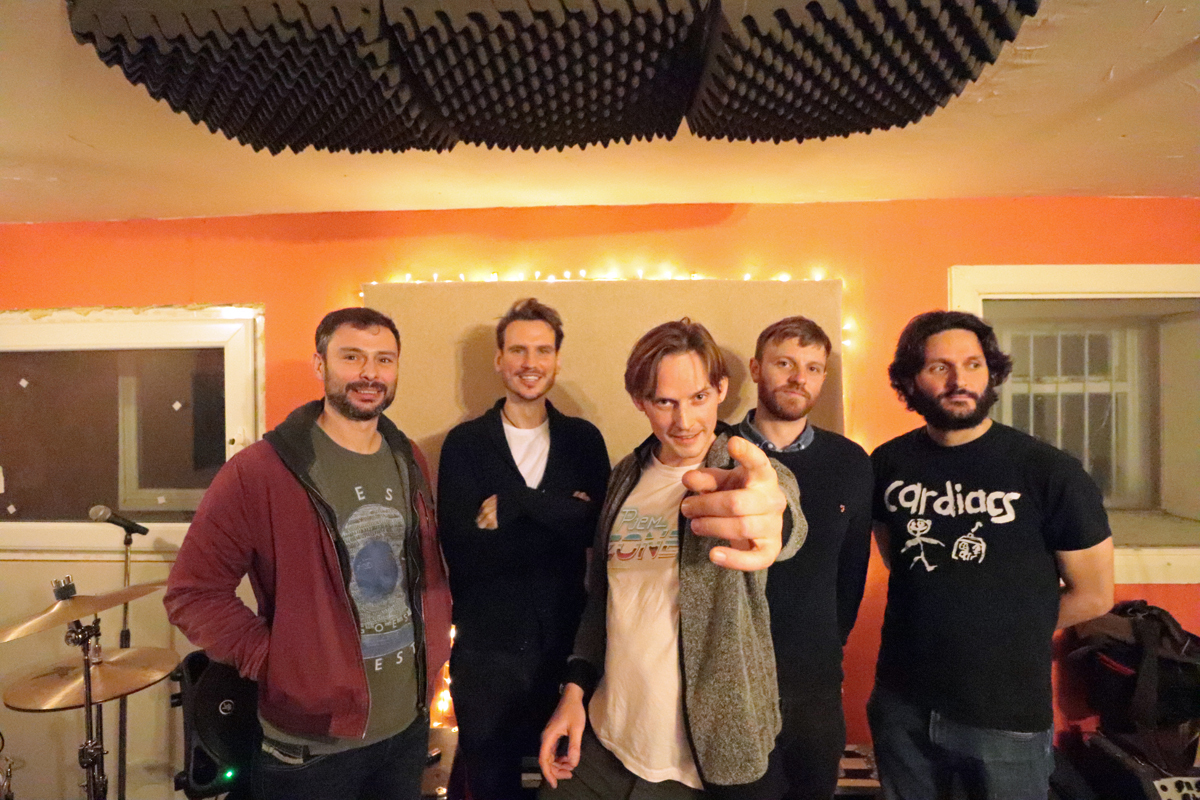 Your latest single is ‘A New Low’. When did you write it and where did you record it?
I wrote ‘A New Low’ in Spring 2015, shortly after I heard Katie Hopkins saying that migrants drowning in the Mediterranean were like cockroaches. That was the trigger. We recorded it in our rehearsal room, in Portslade (just down the road from Brighton where we live).

How does ‘A New Low’ represent you?
I thought it was a great track to start building towards the Punk Yacht album, as it has a bit of punk and a bit of yacht in it. A song of two halves, it starts out rocky with me angry and triggered by Hopkins’ hate stoking, then goes off on a journey which leads to a sort-of Americana outro where I ponder Hopkins’ background, and fail to understand why she is so hateful.

Ultimately, though, I felt like it seemed even more relevant when the country is split in two over Brexit, and we’ve hardened into these polarised camps of leave and remain, with no love lost between us. I think the key lyric is “we don’t know why we came here tonight/ we don’t know why we read it online”. Documentaries like The Great Hack have shown how much manipulation has been going on through social media. We’re taught to fear and hate the other, and when we are angry about things we are much easier to manipulate.

Believe it or not I researched Katie Hopkins background because I wanted to understand her and find some reason why she’s got so little empathy for people whose lives are much more difficult than hers has ever been.

What are your hopes for ‘A New Low’?
I really hope ‘A New Low’ will help us to grow the number of listeners we have and get people to follow our journey. My big dream is getting the band to tour, I feel like this wasn’t prioritised enough when we were working with a label and publisher, but I believe that as an independent band we can make it happen for ourselves.

You’re gearing up to release your second album Punk Yacht. Can you tell us about that?
Punk Yacht is a diverse collection of 10 songs we recorded ourselves, that we’re releasing ourselves, and that we think shows us off as a pretty interesting and unique band. As I said above the title is an attempt to describe what we do, but also not to take ourselves too seriously.

What are your other plans for 2019, can we catch you on tour?
If you book us we will come! We have a show at Brighton’s Concorde 2 on November 10th, which we’re really looking forward to. It’s being filmed and recorded, so I hope we can show it off online afterwards! We’re releasing a second Punk Yacht single called ‘Phantom Limb’ early in November. Follow us on Spotify and you can hear that as soon as it’s available - it’s a moody groover that I’m really proud of.

We’re also developing a lot of video content that we’ll be releasing on our YouTube channel. We want to talk about the DIY recording approach, and how these songs were written and recorded - we got so much from YouTube while learning to do this ourselves it feels right to try and give that back.

How’s 2020 looking?
Early in 2020 we will announce the release date for Punk Yacht, we will have more singles before the record, and, if all goes according to plan, we’ll have a bunch more live dates to support it too. Then, when it’s all done, I’ll have a big long sleep and we’ll get started on the third record! We’ve already written a few bangers.

Finally, if you could go back in time and give yourselves one piece of advice, when would it be and what would you say?
I would grab myself just after signing my original publishing deal and say, “don’t be too polite!” I don’t mean being a rude egomaniac, there are enough of those in the music industry already. I mean being polite and accommodating musically.

If you have bold ideas you should strive for them, fight for them, and be creatively uncompromising. Recording Punk Yacht ourselves has allowed us to do that, and I think I would have been happier earlier in my music career if I’d been more confident and forceful in pursuing those stronger creative impulses.

Listen to ‘A New Low’ on SoundCloud below. For news and tour dates go to fragilecreatures.co.uk.