New Yorker and classically-trained vocalist Faerie has just released her latest EP, 2am. We chatted to the indie-pop, singer-songwriter about how the EP came together, her influences and what’s coming next in 2021.

2am came out of this ball of anxiety that was stuck inside me. I was really struggling mentally in the last two years. I had to find a way to cope, a place to escape.

First up, tell us about yourself - what got you into music?
My name is Christine but I write tunes under Faerie. I first got into music because of my dad. We always did karaoke of classic rock and Disney songs growing up and he eventually taught me how to play the guitar. Since then, I’ve always been involved in music whether it was posting acoustic covers on YouTube or eventually getting my degree in entertainment/music management.

I started focusing on songwriting in my early teens, which eventually turned into working as a vocalist/lyricist for producers in college. I met so many talented musicians just from that. I plan on continuing freelancing while also experimenting with new genres in my own personal work.

Were there any particular artists or groups you took inspiration from?
My childhood was filled with Britney Spears, Hilary Duff, and Avril Lavigne being constantly played on the radio. I tried to emulate their infectious energy by performing whenever I could. It made me realize I wanted to be a performer. Now, I would say my biggest inspirations are Christine and the Queens, Stevie Nicks, Harry Styles, The Beatles, and Lorde.

Why ‘Faerie’?
Faerie is meant to be an overly exaggerated version of myself. She’s love, lust, and fantasy. First, I made a list of potential names to choose from. Faerie was the one that stood out the most. I have quite a fascination with Peter Pan as well, so my interest in fairies was always there. 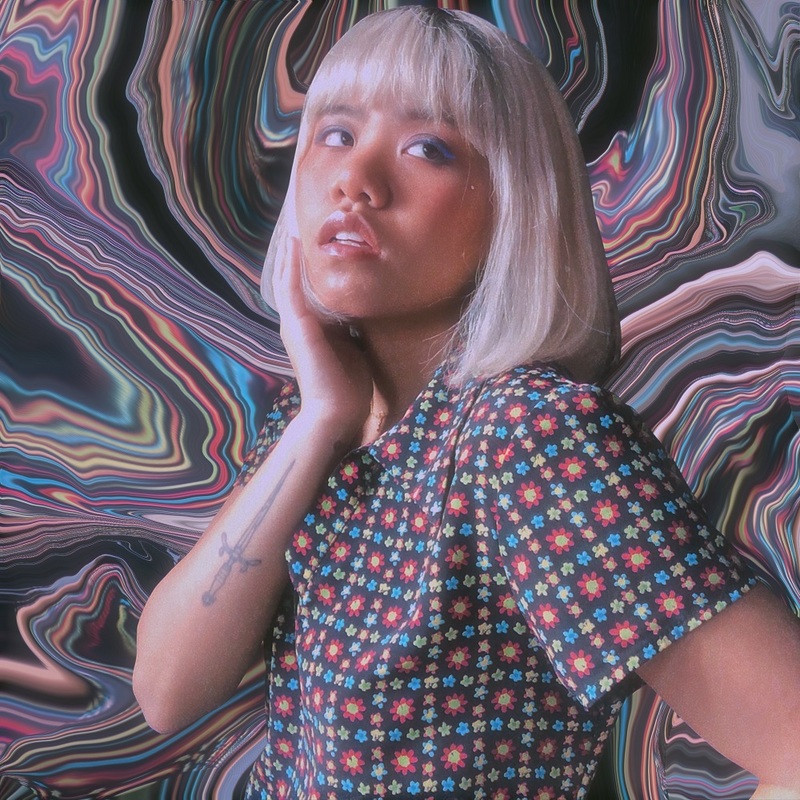 How would you describe your musical style?
My musical style is definitely more retro and nostalgic of ’80s pop. I wanted to keep that feeling while also adding some modern touches to it! I think my producer, Jonathan Atkins, did a great job with that. I’ve been listening to a lot of dreampop and ‘70s rock so it would be cool to experiment more with those genres!

If you could collaborate with any living artist, who would it be?
Jack Antonoff (Bleachers)! He’s such an amazing songwriter and producer. He’s written/produced for some amazing artists such as Lorde, Taylor Swift, Troye Sivan, and Lana Del Rey. I would love to get in his head and understand how he creates complex tunes.

Tell us about your new EP 2am. What’s the inspiration behind it?
2am came out of this ball of anxiety that was stuck inside me. I was really struggling mentally in the last two years. I had to find a way to cope, a place to escape. I wrote the first track, ‘Fever Dream’, to address all these impulsive thoughts I had because I was so frustrated with life at the time. It seemed like the world starting to take a turn for the worse and I was letting go of toxic relationships at the same time. I had to get it off my chest somehow and 2am provided that relief for me.

When did you write it and where did you record it?
I met Canadian singer/songwriter and producer, Jonathan Atkins (wavcat) on a freelancing site in early 2020 and fell in love with his music. We clicked immediately. I told him my vision and how I wanted to encapture the feeling of chaos but also have some retro dance element to it. We started exchanging digital files of demos via email and bam! We wrote the hook for ‘Fever Dream’. It was so exciting!

Later that year, I asked him if he would want to jump on another song which eventually leads to the idea of creating an EP. We finished writing and recording 2am from the comfort of our own bedroom studios in the first week of 2021. 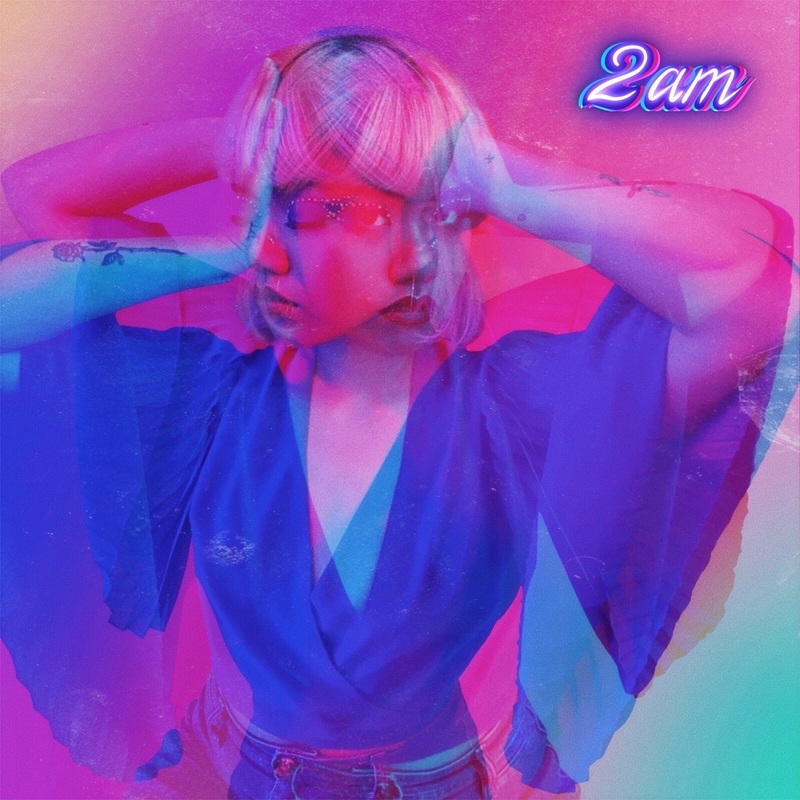 How does 2am represent your style?
2am represents my style by incorporating nostalgic sounds while still keeping it fresh and modern. That’s definitely what I try to express through my style. I’m fascinated by ’60s, ’70s, and ‘80s culture and try to include that in my work as much as possible whether it’s through music or fashion.

Can you talk us through each track?
Sure! ‘Fever Dream’ was inspired by a desperate attempt to please my crush at the time. I thought I loved them but I was only blinded by infatuation. I remember them saying how they liked girls with short hair so I chopped it away. It’s silly thinking about it now but I learned a lot from that experience. I thought of the title in January 2020 when the world started falling into this strange state. All I could say was, “This feels like a fever dream” and it stuck!

I told Jonathan that I wanted to mix this disoriented feeling with some catchy rhythm and ’80s dance-inspired music. We went back and forth on chord progressions and melodies for a few months via email and finally got my dream song.

‘White Noise’ is a personal track for me. It actually started with a completely different theme. I wrote the track for an online music community’s song-prompt about a car. We had a week to write it. I came up with some random chord progression and just went with it. During the listening event, everyone was telling me to finish it so I sent the demo to Jonathan and he was up for it. We wanted to rewrite the lyrics and create a new story for the track. It still has that night-time drive feel from the original demo while also keeping consistent with the synth sounds in ‘Fever Dream’.

‘Fever Dream (Drew Grit Remix)’ is a fun, indie pop remix by UK-based producer, Andrew Greer (Drew Grit). An old colleague and friend introduced me to him when I was looking for producers to remix the track. He knew exactly how to reinvent ‘Fever Dream’ by giving the song a new direction while still keeping its foundations.

He said: “The original version of ‘Fever Dream’ stuck out to me for two reasons, one being it had a lot of guitar for a predominantly electronic track and two, the real sense of sincerity in the lyrics. It seemed obvious to me that this song could be reimagined in a stripped back indie style, so I had to make it a reality.”

‘Fever Dream (discofox Remix)’ is looked at as more of an electronic dance club piece by Jonathan Atkins himself. When he’s not working as wavcat, he writes as discofox to allow himself to branch out to more experimental sounds. I wanted him to look at the track again and imagine that the possibilities were endless, that there were no limitations on what he could do with the remix.

He said: “After speeding up the vocals in ‘Fever Dream’ and listening to them a cappella, it was easy to imagine a new chord progression and instrumental landscape. The melody lent itself well to retro-wave inspired verses, which I haven’t had the opportunity to explore in a while. I wanted to break away from an entirely 80’s inspired track and show off the intended dance side of the original song with a heavier bass drop on the chorus.”

How’s the rest of 2021 looking for you?
I would love to think 2021 would get better and safely open up live entertainment again. I have some postponed concerts to get to! I have a lot of new project ideas that I want to start, too. I want to experiment more with other genres this year. I value collaboration so much and want to create more with indie artists like myself!

Finally, if you could go back in time and give yourself one piece of advice, when would it be and what would you say?
I’d go back to 2014 when I was thinking of dropping out as a history major and say, “It’s never too late to start over and learn something new.” It took me a long time to realize it’s worth pursuing my passion for music. I always thought it wasn’t stable enough because my family expected me to work a government job or in the medical field.

When I finally decided to change my major to entertainment/music management, I was so emotional sitting in my first music-related class. I realized that’s where I was meant to be and it pushed me to become a better musician. My family eventually accepted the fact that music was my calling as well, haha.