Empire of Lights is a three-piece UK psychedelic space indie band, from a small town in mid-Wales. They are John Aziz (vocals, guitar, mixing, mastering), Eifion Davies (drums) and Simon Eversfield (bass, keyboards, vocals), and their debut single ‘Chasing Stardust’ is out now. We caught up with John to find out more.

‘Chasing Stardust’ is about human beings moving into space and spreading life across the universe.

First up, tell us a bit about yourselves - who are Empire of Lights, and what were you doing before making music together?
Empire of Lights is a 3 piece band. John Aziz is the singer and guitarist. Eifion Davies is our drummer. Simon Eversfield is our bassist and keyboardist.

Eifion is just 16 years old, so he’s just been in school. Simon and John met in a music group that Simon was running at a branch of Mind in Llandrindod Wells. Simon studied music technology in university. John has a background in experimental music, free improvisation, and writing science fiction.

We live in a rural area with a lot of farms. We actually rehearse on a farm, where Eifion lives.

Why the name ‘Empire of Lights’? What do you stand for?
Empire of Lights is the name of a fictional space empire from one of John’s science fiction stories. Hundreds of thousands of planets across the galaxy, an empire of planets lit up by human beings. This very much ties in with the theme from ‘Chasing Stardust’.

How would you describe your musical style?
Space rock. We’re fans of 70s psychedelic and space rock bands like Pink Floyd, Led Zeppelin, David Bowie. But we’re music lovers. We like Reggae, hip hop, EDM, jazz, funk, blues, metal, noise, K-Pop. We try and take all of our influences and blend them together without it getting too disgusting.

If you could collaborate with any living artist, who would you love to work with?
That’s a cool question. It’s so easy for a band to say Butch Vig, or Kanye West, or Rick Rubin, and all of those would be cool as fuck. I’d like a single with Drake and Lady Gaga or whatever. But we’re having fun working with a video maker called Erin Draper right now, so I’m gonna go with a cinematic approach and say that I’d like to have Patrick Stewart play a spacefarer in a music video for us.

Tell us about your single ‘Chasing Stardust’. What’s it about?
‘Chasing Stardust’ is about human beings moving into space and spreading life across the universe. Being alive is amazing, isn’t it? Isn’t it incredible that we are matter that has learned to think, and talk, and abstractly regard ourselves? Isn’t it incredible that we evolved from single-celled organisms into monkeys who can fly in planes, and fly through space? I think we have a duty to spread the seed of life across the galaxy. To bring as much of the universe as possible to life. To preserve ourselves, and protect our humanity.

I think the dangers of not colonising space are becoming more apparent by the day. On earth we could be wiped out so easily by an asteroid, or a pandemic, or a crazy dictator with nuclear weapons. On two planets, three planets, 10 planets, it gets much harder to wipe out the spark of life. 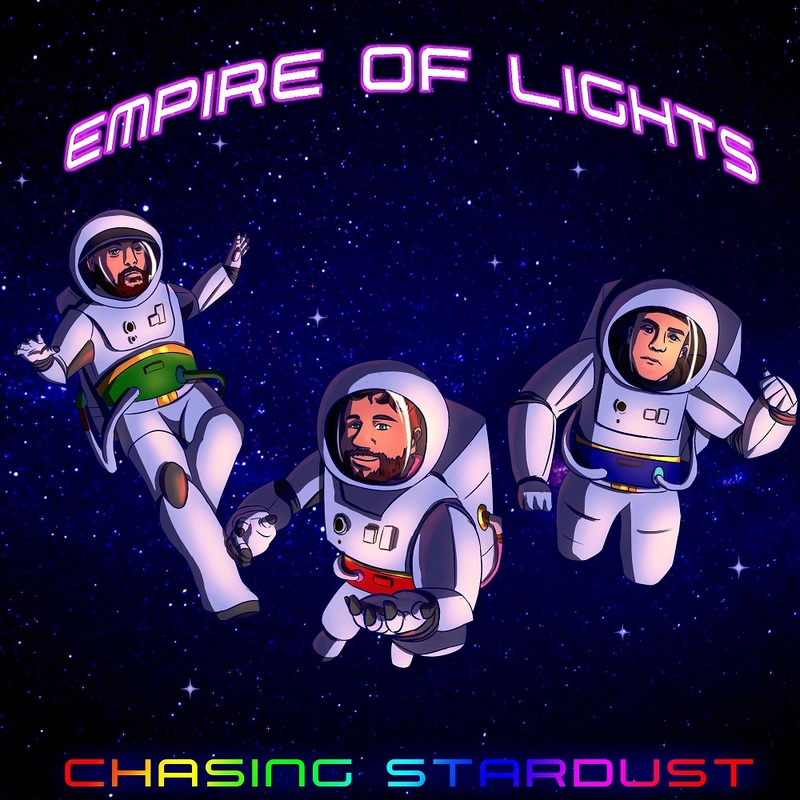 When did you write it and where did you record it?
We wrote it last year, and recorded it this year in lockdown.

How does ‘Chasing Stardust’ represent you?
I think it’s a very clear representation of us. The ambient side, the space themes, the searing guitar parts. It’s a weird mixture of darkness and light.

I’d love to play Glastonbury and Coachella too, so that would be cool.

What are your other plans for what’s fast becoming a crazy year?
We’re working on our second single ‘Can’t Shake Off The Heat’. Where Stardust is all rocket engines and darkness, ‘Shake Off The Heat’ is neon-pink, and cyberpunk, and dystopian, and really funky.

Finally, if you could go back in time and give yourselves one piece of advice, when would it be and what would you say?
I think I’d tell my younger self to practice the guitar more. With a metronome. No slacking off.

Watch the video for ‘Chasing Stardust’ on YouTube below. For the latest, go to the Emipire of Lights SoundCloud.