Wisdom of the Glove with Guy Gerber 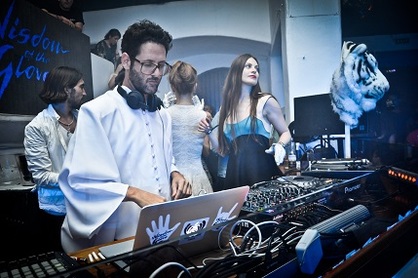 This year Guy Gerber kicked off a new Ibiza party: Wisdom of the Glove at Pacha. The weekly Wednesday night has featured Gerber with special guests, plus glove-wearing magicians, shadow puppeteers and fortune tellers paying sacrifice to a centrifugal £150,000 glove. Michael Wright was in Ibiza for the night featuring Guy Gerber, Four Tet, John Talabot, Midland, Shaun Reeves and Bill Patrick on Wednesday, August 22nd to get a feel for the first season of Wisdom of the Glove.

The season might be drawing to a close, but Guy Gerber and his beloved Wisdom Of The Glove are keeping spirits on a high in Ibiza thanks to their their poetic line ups. Joining Guy last week was none other John Talabot, Midland, Shaun Reeves, Bill Patrick and the amazing live act that is Four Tet. Varying from deep house and techno right the way through the roots of the line up, the show was never going to disappoint.

!(feature_l)http://relayer.s3.amazonaws.com/articles/spreads/521f3a030474940002000038.jpg!Pacha itself has undergone a vast transformation in terms of their music policy, and Wisdom of a Glove is very much at the forefront of their new era. John Talabot started proceedings with some deep cuts. Offering a perfect warm up for Four Tet, he unleashed a nice blend of house upon the audience. Four Tet took to the main stage by immediately stamping his authority; drifting away from the deeper styles and celebrating the more acid tinged throbs onto the amazed onlookers.

Gerber & co. are still very much in good form.

!(feature_r)http://relayer.s3.amazonaws.com/articles/spreads/521f3ec50474940002000042.jpg!Whilst the blanket of fun-filled slabs cut across the masses of folk dancing to Four Tet, I managed to swiftly turn my attention to Room 2. The aptly titled ‘Funk’ room has been a bit of a dark horse where Pacha is concerned this summer, but even so, it rarely disappoints. Shaun Reeves and Bill Patrick warmed things up nicely, conquering the packed area and dishing out some fresher selections onto their faithful crowd, while Midland finished things off with some sublime deep techno. Midland has had a huge year and it was safe to say he pushed the boundaries with his mix, a fine showing that epitomises his current stature in the game.

The main man himself, Guy Gerber, subtly took over from Four Tet, who was very graceful with his mass applaud from the packed house. The Supplement Facts boss married some new edits from the imprint with some older and obscure records from his collection, before going back-to-back with John Talabot in what seemed like an impromptu set. The night was a total package in terms of music, which perfectly intertwined with the hypnotic decor and the halloween-esque dancers. With the end of the season very much on the horizon, Gerber & co. are still very much in good form.