Wilkinson Live: Back at Brixton Academy

Wilkinson is no stranger to building a successful show from live elements of drum & bass, and refining it over the past four years. He was back in Brixton on Friday, February 28th for another expert round of that Wilkinson Live sound. Laura Jones was there. 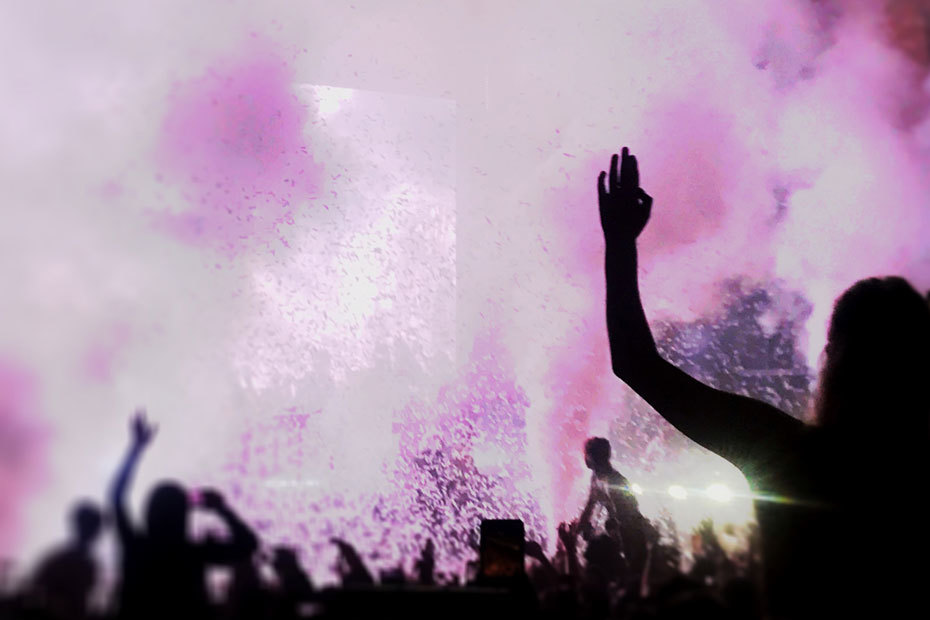 We were left blinking and dazzled by the all-hands-in-the-air glory of 'Afterglow', as confetti rained down.

Two hours to showtime. Inside that pantheon of live music, Brixton Academy, Pola & Bryson’s smooth selections rippled through the crowd. Rapidly gaining respect in the scene with their melodic blends and uplifting beats, they were the ideal choice to set the tone beautifully. A tone that albeit never veered too far into the big vocal enhanced tracks headliner Wilkinson has made his name with.

After the last choice liquid drop, the enthusiastic crowd had a half-hour wait between acts, but high spirits could not be dulled by this point. Swathed in black curtains, the stage gave little hint what was next. But this was to be Wilkinson’s only live UK appearance this year, and expectations were of new music, special guests, and that no punches would be pulled.

This was proof that Wilkinson as an artist with his roots in the dark and claustrophobic rave, can then zoom out to a panorama, creating a seven person stage show to fill it. 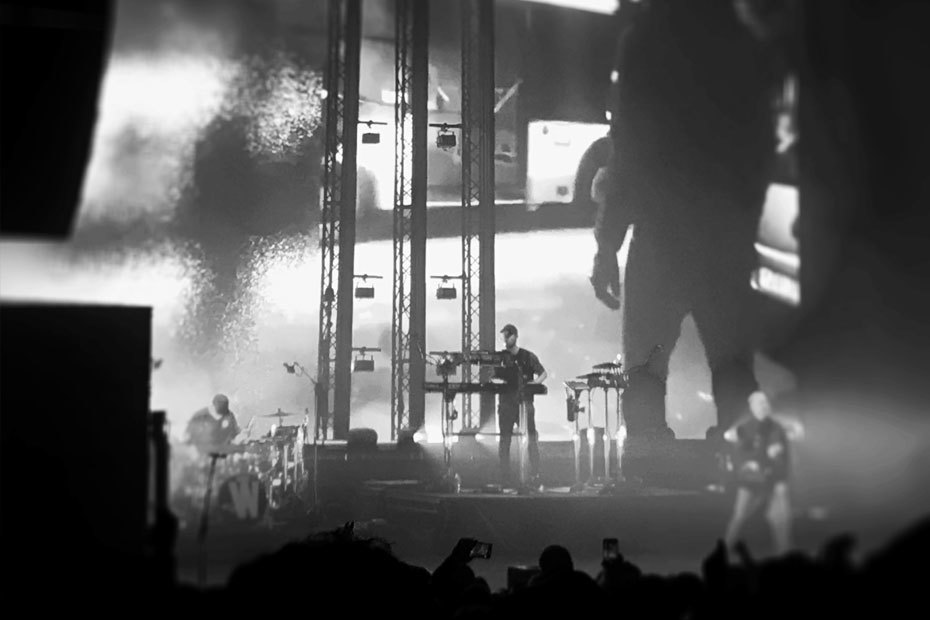 Wilkinson with his band

A blue thread of LEDs began to pulse, a lone bass guitarist silhouetted by smoke. A low bassy rumble. Searching lights slowly scanned from a specially built rig above us, and grabbed even the most chatty raver’s attention. Dramatic light columns reached front to back, and in the centre, Wilkinson took his place at keyboards and pads.

Joined by the live drummer pounding on the bass drum, and to cheers elicited from MC Ad-Apt, the lights became a frenetic zig zag. Those on stage wasted no more time, and the noise crescendoed into the launch of opener Take You Higher. Swerving from the aggressive, relentless ‘Hit The Floor’ to get the crowd pumped, then switching back as collaborator Jem Cooke beautifully sang ‘Breathe’ to an enraptured audience. This was proof that Wilkinson as an artist with his roots in the dark and claustrophobic rave, can then zoom out to a panorama, creating a seven person stage show to fill it. 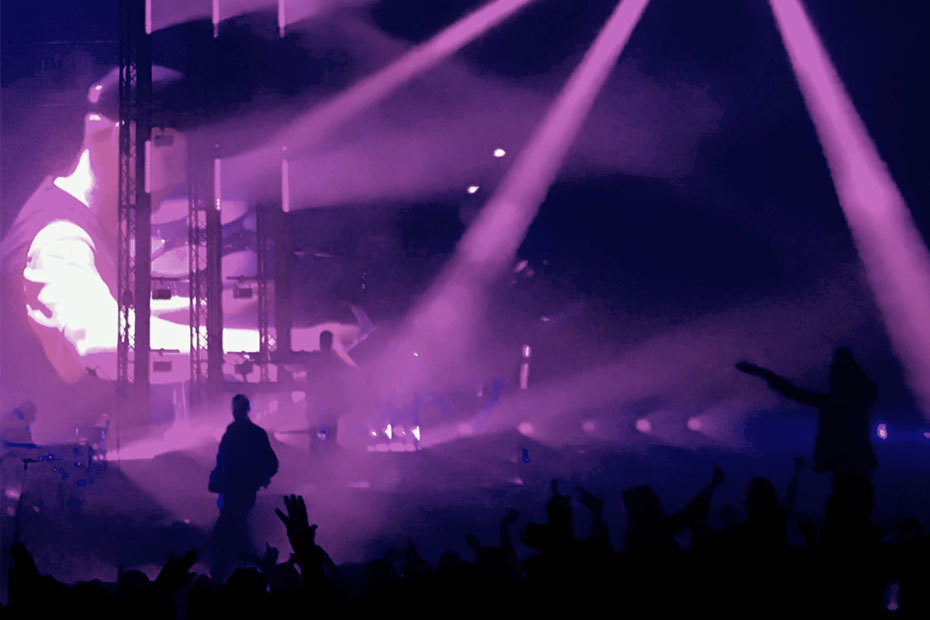 This was to be a high energy night, and we were only just past midnight. With smiles all round it was a rush through some more big hits from 2015’s debut Lazers Not Included, and the later Hypnotic. As collaborator Karen Harding’s vocals soared on ‘Sweet Lies’ (my personal favorite track off this), it was to be the last of the sweetness before getting into something heavier. Wilkinson was blessed with not two but four amazing vocalists tonight. Taking the tempo down, original collaborators Shannon Saunders and Youngman shone on duet ‘Hypnotic’, the namesake track from the second album.

‘Decompression’, the 2018 track with which followed up his album forays, is a slice of pure drum & bass with, at its core, that steely Ram Records sound and a disciplined vocal loop. We followed it down into darker territory. Wilkinson’s video backdrop up until this point had largely been close-ups of the band, looming some twenty feet above us, to great effect in keeping all eyes and minds firmly on the music in front of us. 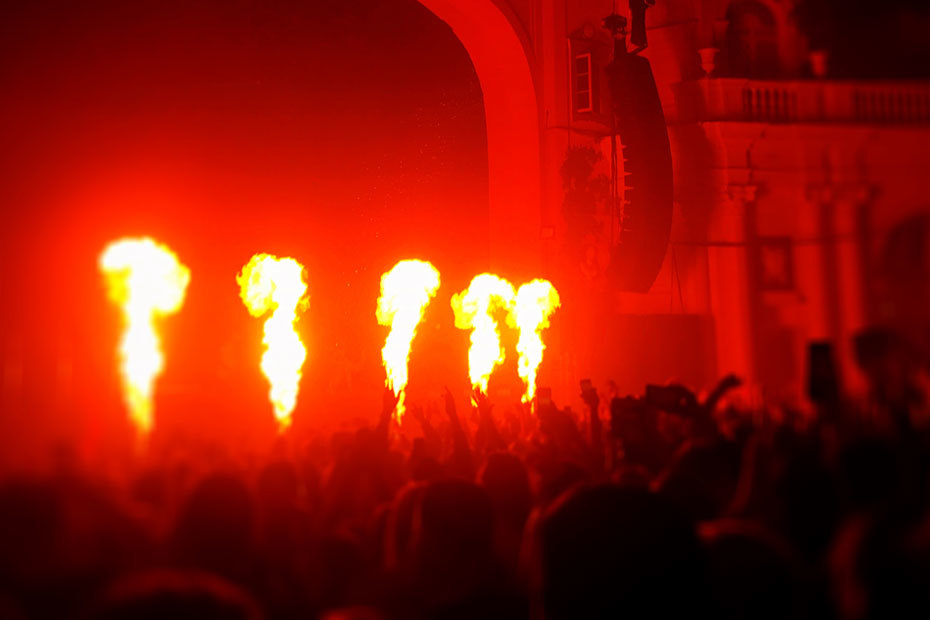 Wilkinson and his band bring the fire

This shift in tone brought a shift in visuals. As stomper ‘Brand New’ rang out, riot footage and urban scenery drenched in red filters ramped up the dystopian levels. A bitter tonic to the shinier, commercial side of his music, although this was a short foray into the dark. We were plucked blinking and dazzled by the all-hands-in-the-air glory of ‘Afterglow’, as the confetti rained down.

Wilkinson showed us tonight that he has thought long and hard about how to give a new spin to his old tunes, and about how those around him can enhance tracks best. He can be counted as part of that special co-hort of creatives building a legacy for drum & bass music beyond the clubs.

Whilst this was Wilkinson’s only live UK date, catch him this year as he DJs at dates across the UK, and at Tomorrowland festival.