!(feature_l)http://relayer.s3.amazonaws.com/articles/spreads/503d45df0126bb0002000136.jpg!In Groundhog Day, a weatherman finds himself living the same day over and over again. Similar to SW4 reviews which find themselves regurgitating the same standard form year after year – fantastic hard hitting line-up, let down by a limp sound system (thanks to local licensing restrictions). Yet each year young clubbers are lured back by promises of PA companies and noise consultants. Like returning to an ex, we all know it will end in rank disappointment – somehow the promise to change makes us convince ourselves may all be different this time.

But to our surprise, this year was different. In place of that familiar feeling of regret was a festival that had finally come true to its word. Make no mistake; SW4 will never have the freedom afforded to out of town festivals. However, this year they managed to finally give the star-studded line-up, the production values they deserve.

A great year for organisers to finally find their way around the restrictions because the performances were fantastic.

!(feature_r)http://relayer.s3.amazonaws.com/articles/spreads/503d46920126bb0002000138.jpg!As we wandered through each of the arenas, we were impressed by the crisp clear sounds that in previous years, you had to climb inside the speaker stacks to hear. We did hear some scattered mutterings of discontent about the sound levels in the Pete Tong Tent. If it had been the case earlier in the day, by the time we wandered in to catch Sasha working his magic at guiding the dance floor through progressive and tech-house, someone had found the volume knob again. This was a great year for them to finally find their way around the restrictions because the performances we saw were fantastic.

We started on the main stage listening to chart newcomers Rudimental who confidently transitioned through a mixture of dubstep, electro and drum and bass. Accompanied by live brass, and of course singer John Newman, they attracted a much larger crowd than their early slot warranted and will no doubt be moving quickly up the line-ups if they continue to build on this engaging concoction. 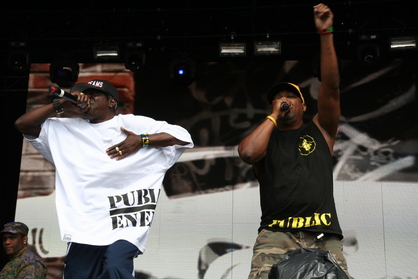 It was a similarly early slot for Public Enemy. And it is this early start, which is one of my only real complaints about SW4 this year. It’s a shame that these true pioneers of hip-hop, and in my opinion a real coup for the organisers, were relegated to play when most people were still stuck in hour-long queues to enter the site. Thankfully all the other arenas slowly emptied to give them a crowd befitting their status. If they were bemused that most of the audience were a twinkle in an eye when ‘Don’t believe the Hype’ was released, then they didn’t show it. Instead they gently coached the crowd through huge hits such as ‘Fight the Power’, ‘Can’t Truss It’ and ‘He Got Game’ like true professionals and bastions of the hip hop scene. It was a shame that the only song that most of the crowd knew was ‘Harder Than You Think’, and only then because of the recent advert featuring it. However, against a backdrop of Skrillex, Flux Pavilion and DJ Fresh, SW4 was never going to attract the demographic that they are most likely more used to performing to.

Maya Jane Coles once again showcased just why her stock is so high.

!(feature_l)http://relayer.s3.amazonaws.com/articles/spreads/503d46320126bb0002000137.jpg!As the day wore on we wandered through the different tents to catch highlights from Erol Alkan, Brondinski and Gesaffelstein, Friction, and Maya Jane Coles – who once again showcased just why her stock is so high at the moment. Solid sets ensued from stalwarts such as Green Velvet, Seth Troxler and Diplo. Slightly disappointing however was Andy C, who, despite displaying his second-to-none skills at quickly transitioning using multiple decks, lacked the environment to really make his Alive show work visually. His slimmed down version, which was rushed on after Flux Pavilion’s enthusiastic bass heavy set, just seemed a bit wilted and lost.

Overall though, it’s hard to find much fault and hats off to the organisers for finally fitting the last piece of the puzzle into place. So after an upcoming season of SW4 Club Sessions, we eagerly await to see if they can build on this and make next Bank Holiday August, another one to remember. I, for one, can’t wait to find out.