The tried and trusted late August bank holiday event showcased the best in homegrown British dance music across drum & bass, house and grime on Clapham Common. As well as stylish sets from Belgian producer The Magician and Dutch Bakermat came a tour by the US’s Armand Van Helden though 25 years of house hits. Jungle beats past, present and future delivered, courtesy of Andy C, Chase & Status and London’s Shy FX, with a little help from his friends. Laura Jones was there. 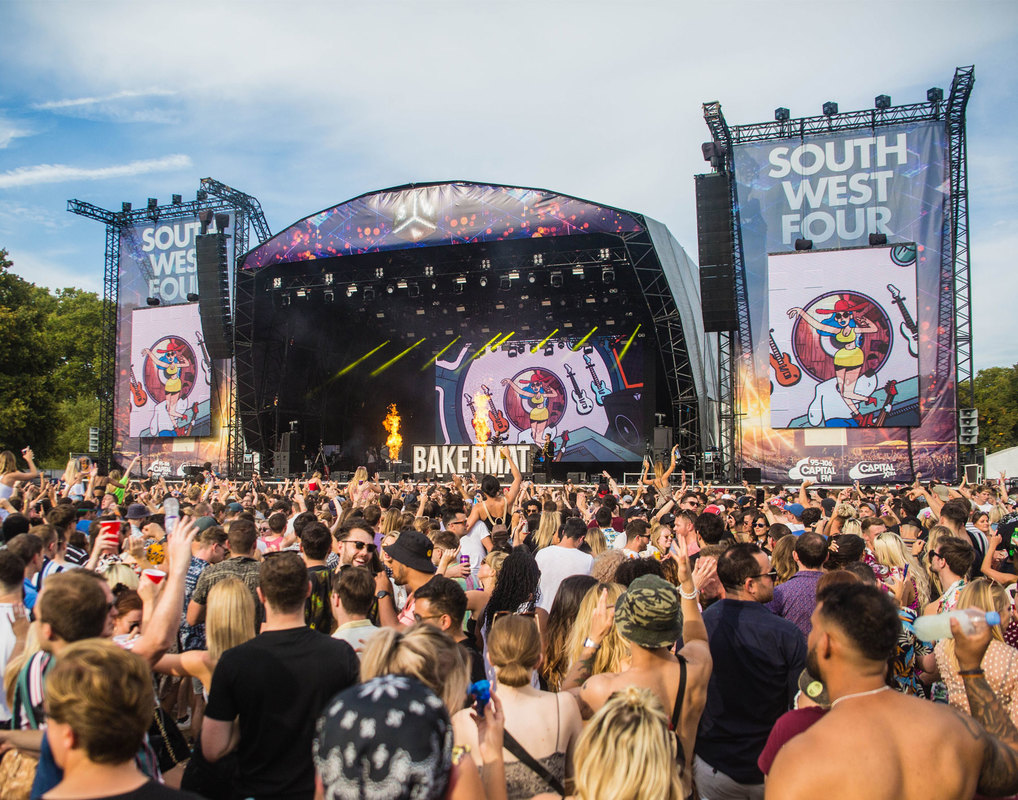 Sunny highs, with the only lows those of the rumbling basslines at the 16th chapter of South London’s best dance music festival.

Saturday 24th August
Bright coloured tents rose into view like a mirage, on what went down in history as the hottest late August bank holiday weekend ever. Boys’ shirts were already off and, rather than simply a fashion choice, bikini tops and mesh trousers were also a great way to prevent overheating. Chilled beers and ciders were cooling down the crowd, as Tinie Temper was heating things up, one of the rosta of high profile acts on early across both days. 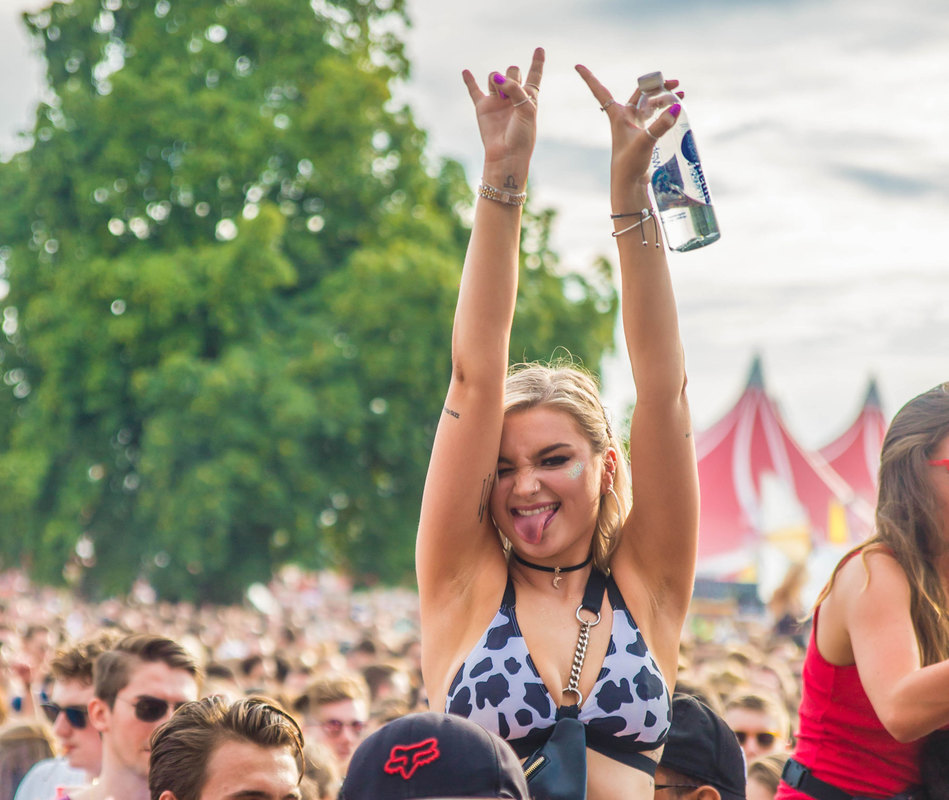 Although hot in the afternoon sun, it was nothing compared to inside Ministry of Sound’s teeming tent. The Magician spun exactly the kind of shiny, disco-inflected tracks you want on a day like today, such as massive summer smash ‘Sunlight’ which saw hands thrown in the air. It was a roadblock outside, and the crowds streamed in for Idris Elba, a man who only had to appear side of stage early to send the packed tent into even more of a frenzy.

I was excited to see Armand Van Helden taking to the Capital FM Main Stage, and taking us through his back catalogue of remixes and productions. From 1996’s Sneaker Pimps’ ‘Spin Spin Sugar’ and Tori Amos’s ‘Professional Widow’, to own tracks like 1998’s ‘U Don’t Know Me’, 2005’s ‘My My My’ and 2007’s ‘I Want Your Soul’ it was a set that felt casual, despite these being huge hit after hit, and when DJs like him over-embellish stage shows with gimmicks, felt refreshingly paired-back. 2009 Dizzie Rascal collab ‘Bonkers’ reminded everyone of his ability to create and cross-over with British artists, and the crowd sung along with every word. 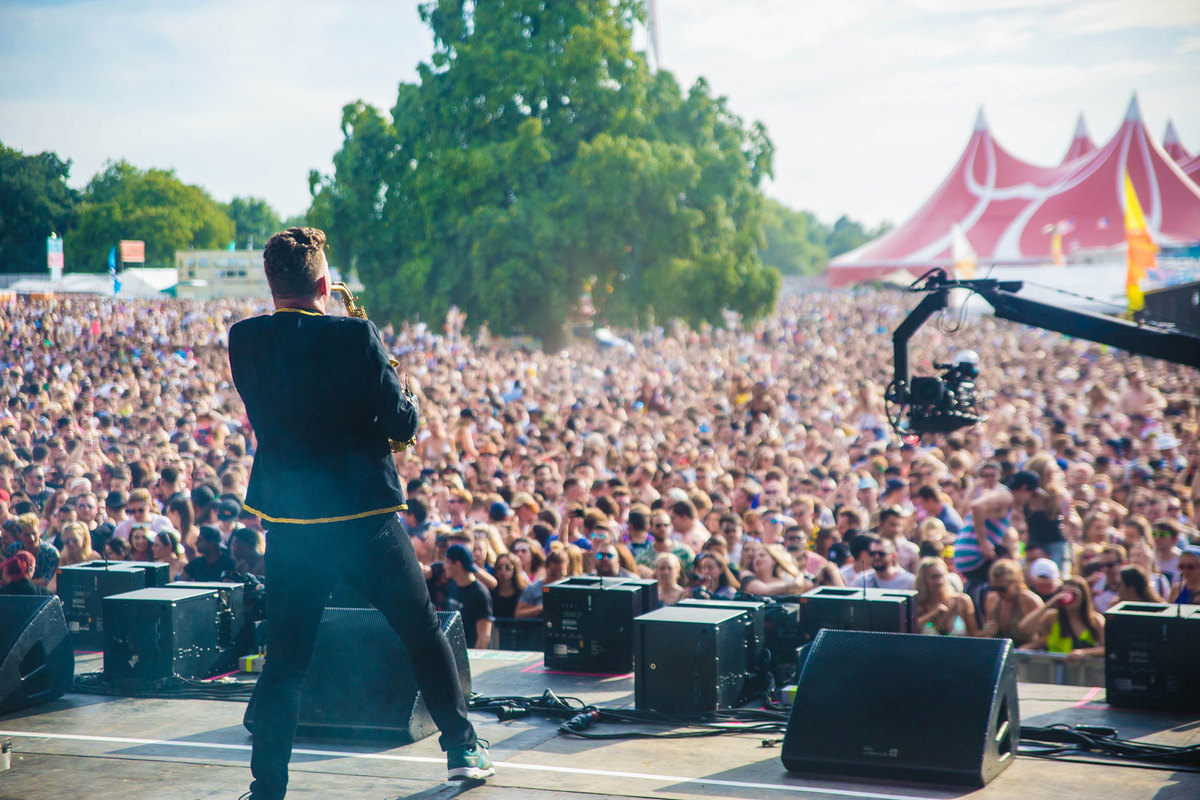 A tough act to follow, were it not for the fact that Dutch artist Bakermat’s music “makes people really happy” as Resident Advisor attests. He knew how to make a bold visual statement: his name literally in lights; resplendent in a marching band jacket complete with shiny gold buttons; accompanied by a live saxophonist; and retro-cool graphics of a martini-swilling, poolside-lounging, hipster-befriending canine.

If that sounded like a wild mix, that’s because it reflected his multitudinous musical reference points. Dance tracks combined classical, jazz and soul, but it was LunchMoney Lewis track ‘Bills’ (a rag-tag mish-mash of hip-hop, jazz and soul elements itself) that had the crowd madly chanting. “I got bills, I gotta pay” sang mainly just-turned-18 Gen Xers with probably little more than a giffgaff contract and Netflix subscription. 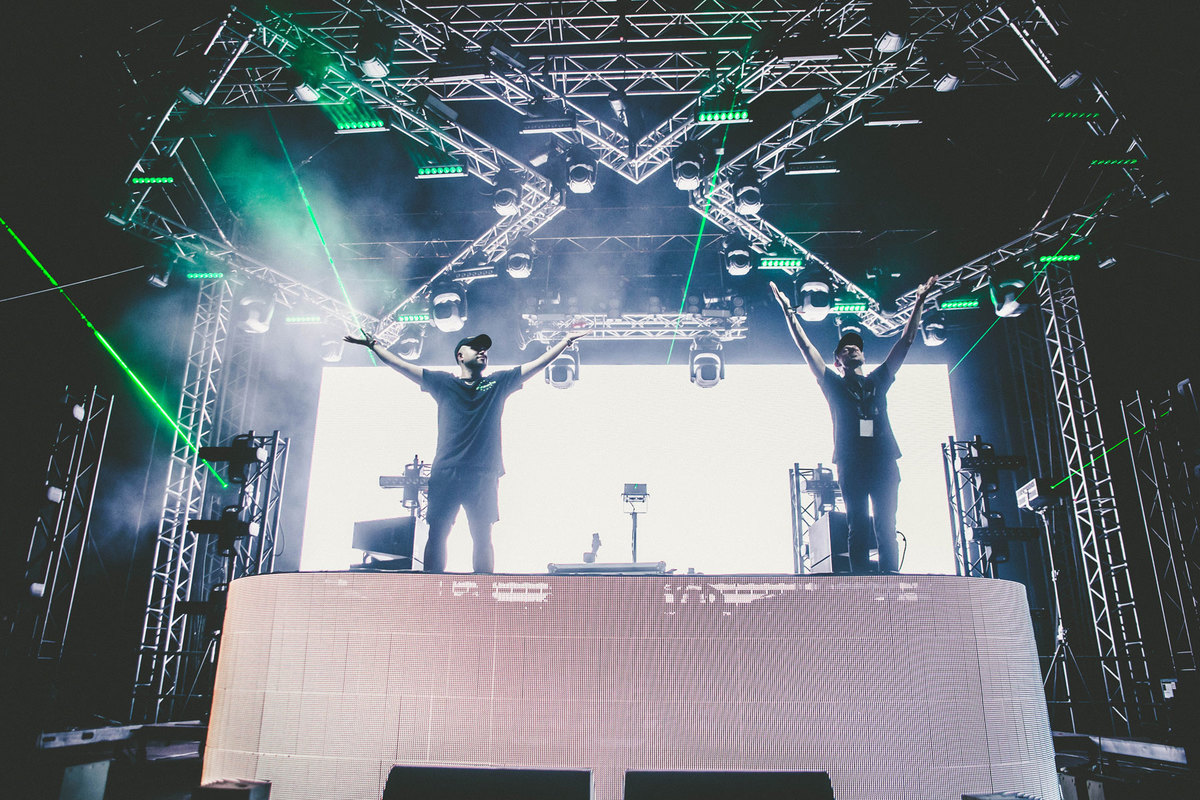 If Bakermat was continentally cool, Europa (the moniker for the new Jax Jones & Martin Solveig collab) was a bit more Eurotrash. A neon-coloured, sugar-coated, highly-saturated fun set, it fizzed and popped with energy, albeit the sort that will leave you empty soon after. A pastiche of 90s graphics and house beats, like hit “All Day and Night” with those cheesy “Encore Une Fois”-esque synths. Solo Jax Jones breakthrough track “You Don’t Know Me” was teased out to be a crowd-pleaser, before the stage’s namesake Craig David Presents TS5 took the floor. 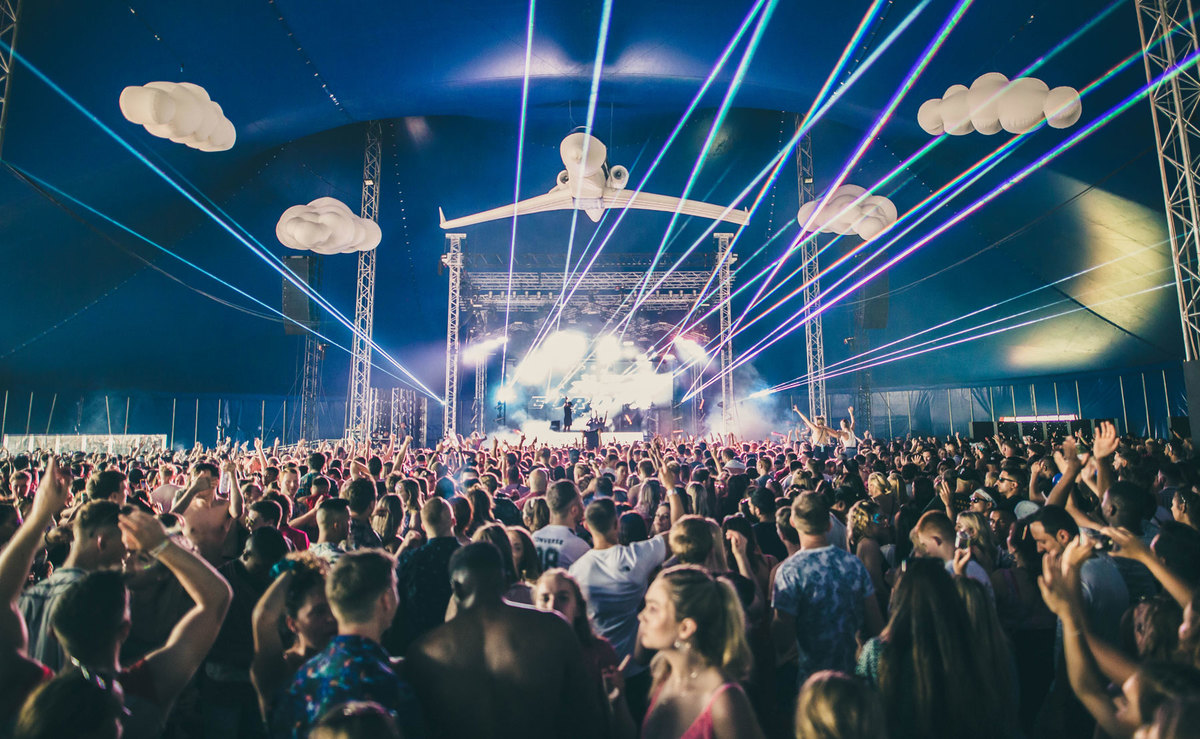 Inflatable fluffy clouds and a TS5 logo’d jet bobbed overhead, though we had no intention of wishing we were anywhere else than here. Watching his trademark blend of hopping behind the deck, crooning into the mic, and being his own best hypeman, we enjoyed every minute along the way.

Taking regular, long fresh air breaks to ensure I didn’t overheat, and could return for a packed Sunday, meant only brief stints inside the other tents. US producer Jauz is no stranger to South West Four Weekender, and as label boss of Bite Me hosted a stage in collaboration with Together. Paired with UK’s Holy Goof (whose star is on the rise having turned in a debut Essential Mix), the sound was all high energy and squelchy lows.

If Saturday was sunshine before a looming drum & bass storm tomorrow, Sigma bridged these two worlds. Their sunny brand of 170bpm crossovers, like ‘Nobody to Love’ and ‘Changing’ has grown with new release “Dilemma”, a piano-tastic sampling of the Nelly and Kelly (Rowland) duet set to be another signature hit.

If there were pastiches of 90s graphics and beats yesterday, Sunday brought the real deal.

Sunday 25th August
Plan B started our sunny Sunday off right. Protest-penned track ‘Ill Manors’ was all snarls and hyper-masculinity, but rapper and singer Ben Drew switched expertly between these urgent musings on the state of society and something brighter. Reggae and dancehall vibes came from his wide-ranging album ‘Heaven Before All Hell Breaks Loose’, before he finished with feel-good ‘Stay Too Long’, and had the crowd shimmying along to its sixties R&B groove. 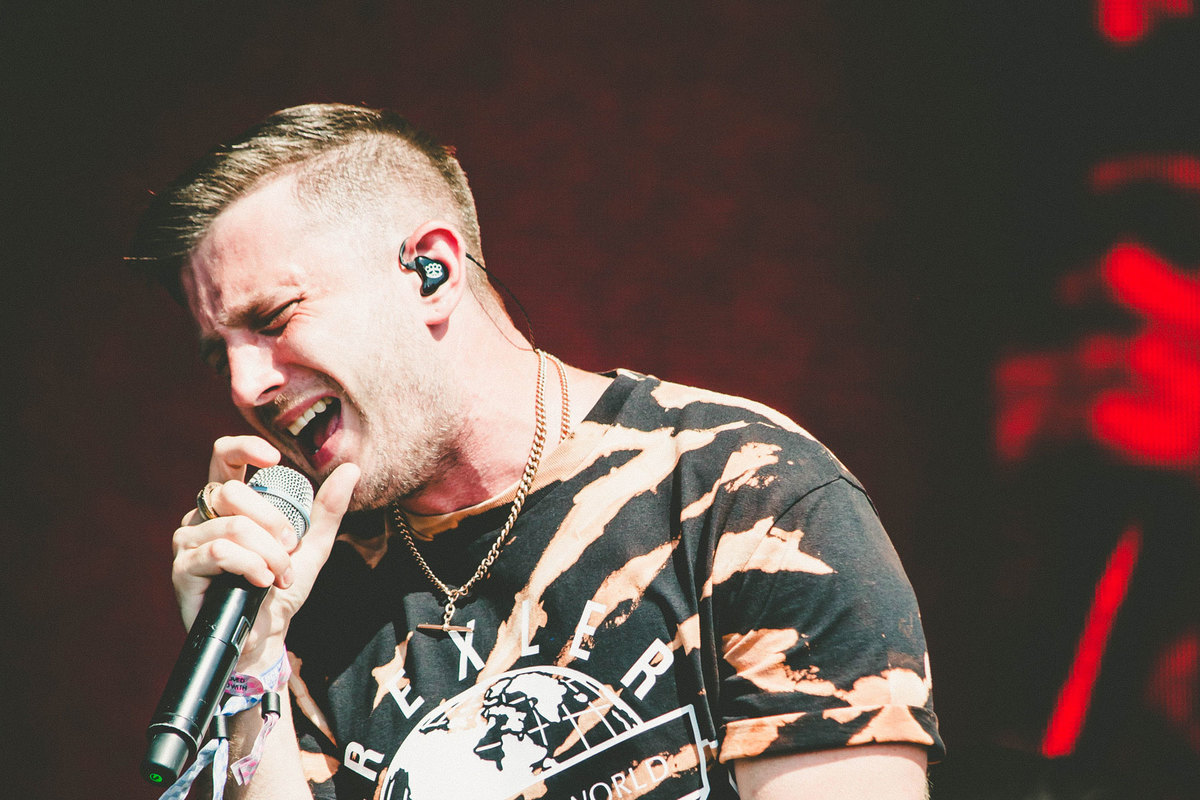 Notting Hill Carnival goers may have been revelling in jungle and drum & bass on the other side of town, but Clapham had its own slice of the carnival in Shy FX. Presenting his cult.ure show in a festival exclusive, carnival anthem ‘Original Nuttah’ set the tone for the next 60 minutes. 25 years old this year ,it never sounded so good, with UK Apache on the mic, and having received the Chase & Status remix treatment.

Then came an hour of gleefully running through hit after hit with special guest after special guest. Songs that caress you with sweet whispered nothings, then wallop you over the head when it drops, like ‘Badboy Business’. It was a party, one where Lily Allen bounded across the stage in tie-dye for ‘Roll The Dice’ with Stamina MC, and colourful visuals of cats in space danced behind. 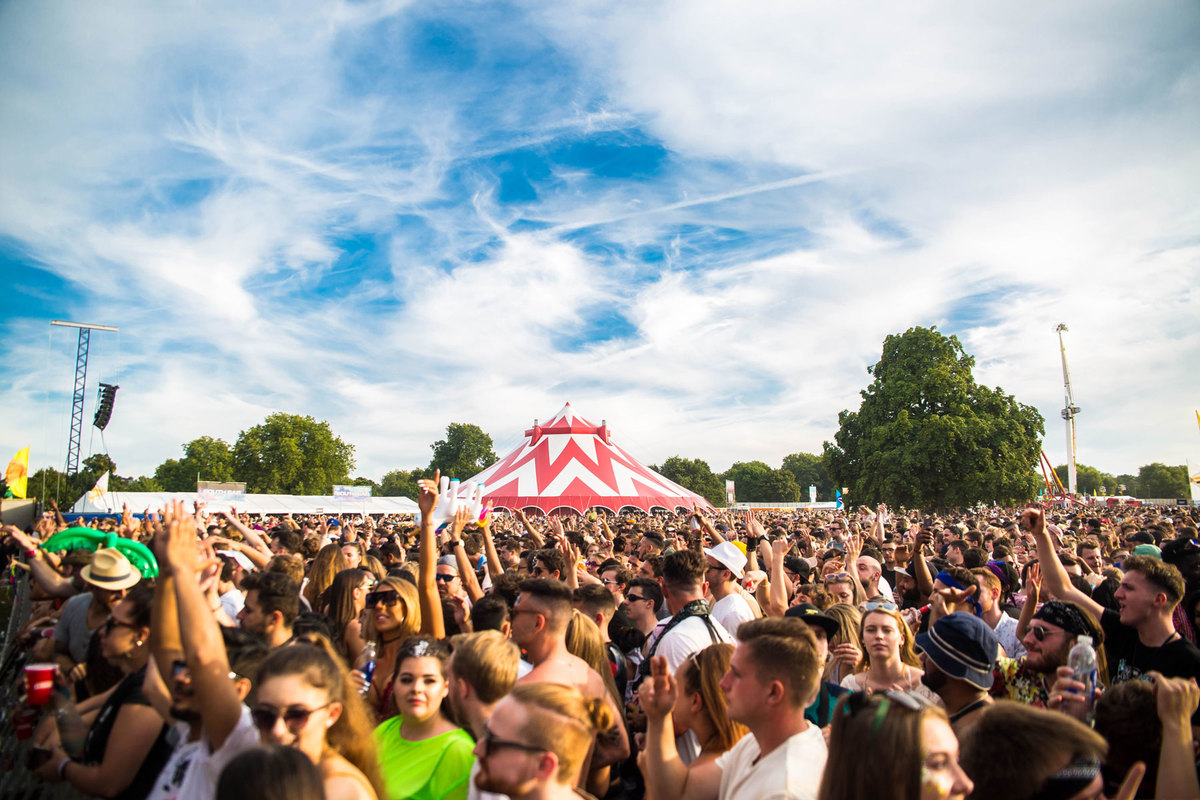 If there were pastiches of 90s graphics and beats yesterday, Sunday brought the real deal. This was a more authentic referencing rather than plundering by the recordbag load. The Chase & Status RTRN II JUNGLE tent had a line up of those that were there at the start of the scene, synonymous with the ragga sound.

Brockie and Det, Congo Natty, as well as MC wall of sound SASASAS. Plus artists that have breathed new life by introducing new elements, like duo My Nu Leng. Doc Scott B2B with Randall kept the deep rollers coming through when I first stuck my head in. If temperatures at Shy FX’s main stage were a summery 30 degrees plus, these two kept the mercury low with ice-cold jungle steppers.

Even if you couldn’t see the trio behind the decks on the main stage, or hear the pleasingly abrasive lurching toplines above drum claps and basslines, one look at the crowd could identify TQD. Fans draped in hazard yellow logo’d bandanas, and flags worn as capes bopped to the wonky noises coming from the speakers. The same speakers would be shook to their core as up next was the inimitable Andy C.

His remixes like 2013’s Major Lazer’s ‘Get Free’, with summertime sadness vocals, sounded so good in the sun. This was before he hit with low-down grimey rollers, like new ‘Siren’ from Sub Focus, and Dimension’s track of the moment ‘If You Want To’. Hosting duties were by MC Tonn Piper, whose huge stage presence and high-energy had the crowd waving t-shirts and shooting trigger fingers. With run after run of dubs, cuts and those famous Andy C double and triple drops the hour was over too soon, for the DJ famous for his long-form sets.

Innovative is the word I’d use to whole-heartedly describe the drum & bass scene right now. Chase & Status’ show is fresh off release of album RTRN II JUNGLE. Created from their recordings of artists in Jamaica for that authentic ragga sound, they’ve set to new jungle beats. I loved the found footage of ravers on screen, a nod to the scene’s roots but never feeling in danger of treading old ground. ‘Weed & Rum’ chimed with the bank holiday feel-good vibes, while ‘Program’ decimated. With one listen to its crashes, wails and skittering beats, you’re left in no doubt that Chase & Status are back to business: everybody dun know the program. 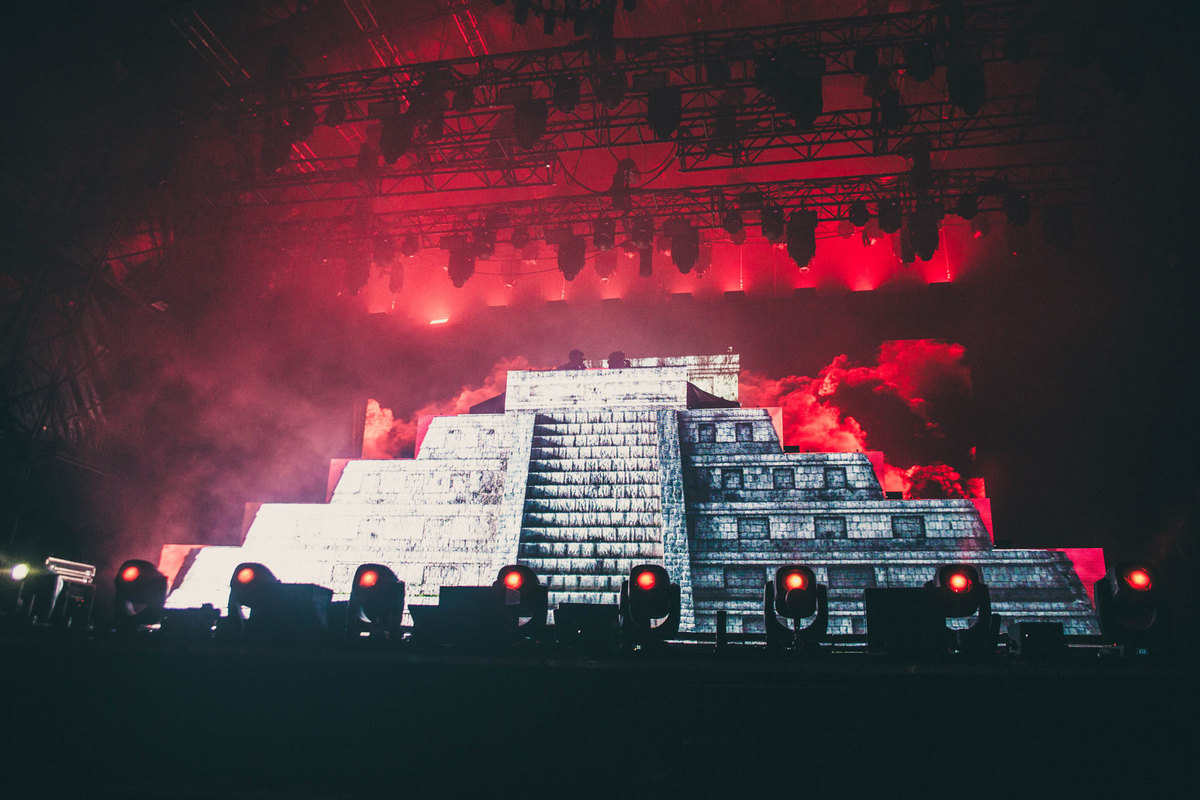 At last time for Pendulum’s show-stopper. Trinity began as a mysterious, ancient temple shifted and glitched into place. LED screens yielded to the army of technicians swarming the stage. With visuals as futuristic and high-end like this, it made the traditional fireworks that mark the end of each night feel like a relic from the past. South West Four, with its continued programming of acts that refuse to stand still, felt anything but.