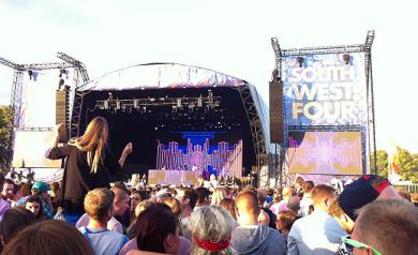 South West Four returned to Clapham Common over the August bank holiday weekend with another two days of dance music in the south of London. We were there on Saturday to report on the beats.

As we entered SW4, the first tune blasting out of the main stage was the Audien remix of Bastille’s “Pompeii” courtesy of Arty. The sun-blessed crowd were loving the early afternoon euphoria, the site already looking very busy and the Saturday buzz of a bank holiday helping fuel the party atmosphere. We got our bearings by chilling in outside the Last Day on Earth tent where Guy Gerber was ploughing through beefy tech house, and we got involved at the end when the mood was switched to more deep and moody selections.

Next up in the same tent was a live show from Booka Shade who sprinkled new tunes in amongst classics such as “In White Rooms”, “Mandarine Girl” and “Body Language”. The crowd had their arms in the air for all the Movement tunes, though they were cut short in the new live show to make way for their fresh material of bland tech house. Thankfully Booka Shade’s seminal classics still sound as sharp as ever.

The Better Lost Than Stupid trio of Martin Buttrich, Davide Squillace and Matthias Tanzmann were having their own party behind the decks.

Stepping outside into the sun, dark clouds loomed above and then the rain came. We took the opportunity to switch up the stages so headed to the DJ Magazine Arena where the Better Lost Than Stupid trio of Martin Buttrich, Davide Squillace and Matthias Tanzmann were having their own party behind the decks. They were laughing and joking with each other as they pounded through a set of underground house, taking our minds off the pouring and rain and firmly focused on dancing.

We stayed on for Tiga vs Matthew Dear’s Audion project which produced an electro-tinged back-to-back house set which upped the pace and maintained an excitable crowd. The pair seemed well in-tune with each other, and perhaps there’s more to come from this partnership as the skilled producers have already had hits with the huge “Let’s Go Dancing” and “Fever”.

When the rained stopped we took the opportunity to get some air, soak up the last of the rays and catch some of the main stage acts. The New World Punx, aka Markus Schultz and Ferry Corsten, were in full flow with their high energy trance including their remix of Fatboy Slim’s “Praise You”. W&W were up next with a set of EDM hits including tunes from Martin Garrix and Sigma – the latter’ remix of “Nobody to Love” given the 4/4 remix.

We decided to finish our day with the star of Berlin Calling, Paul Kalkbrenner, back in the Last Day on Earth tent. He’s been a popular character since his star turn in the film and he duly obliged the eager crowd with tunes from the soundtrack such as “Sky And Sand” plus his cheeky Mad World edit. Kalkbrenner’s set was a highlight of the day and though the sound issues associated with SW4’s resident location means it can never be as loud as events in farming fields, there was a great vibe throughout the day and a decent volume most of the time.