While Sónar will hit eight cities next year, the 21st edition of the original, Sónar Barcelona, in June attracted 109,000 electronic music fans from 99 countries along with another 3,500 professionals at Sónar+D, the festival’s congress area. With record attendance figures of 52,000 attending Sónar by Day, it was an impressive turnout for what would be one of the most impressive editions of the festival ever held. Mike Barnard was there to live it all.

The move to Fira Montjuïc for Sónar by Day has given a new lease of life to what had become a crowded space at the MACBA. Now the central space of SónarVillage acts as a focal point for gathering in the sun with access to the other venues which has eliminated the cramped conditions of the old Village. We arrived to see MØ – looking like a Swedish Sporty Spice – bouncing around the stage while rocking out. The Danish singer has seen success with songs such as “XXX 88” collaborating with Diplo, and produced a spirited display which climaxed in first a crowd walk, then a crowd surf. She was keen to show her rebellious attitude, which was appreciated by the early crowd. 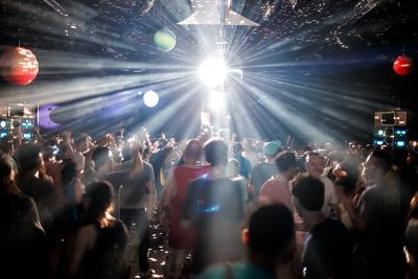 We decided to take an early look at the just-opened DESPACIO area next, where James Murphy and 2manydjs were spending six hours a day showcasing their custom-built McIntosh soundsystem with a range of vinyl geared towards disco and house. The seven speaker stacks in themselves were a sight to behold, arranged around the dancefloor and cranking out beefy bass and blissful melodies. self-Contained within a black curtain, initially it was hard to see when entering the space, then the spotlights came and a huge disco ball was illuminated to huge cheers, kicking in for the rest of the day. We left and sadly never made it back such were the queues to return – the additional area a winner for Sónar despite being limited to just 1,200 people.

Elsewhere we caught a blend of r&b, hip-hop, post-dubstep and contemporary pop from Ryan Hemsworth in the Village, a mild live set from Koreless in the Red Bull Music Academy’s SonarDôme then experienced a more 4/4-driven set in the form of Machinedrum Vapor City Live with a mix of electronics, guitar and vocals from Machinedrum while Lane Barrington took on drums and samples.

It made for a raw energy to the performance of his new album, much like Trentemøller who followed in the SónarHall. Anders Trentemøller largely performed new material from his album Lost which also leant itself to guitars as much as synths, though it was telling one of his most compelling tunes of the night was “Moan”. 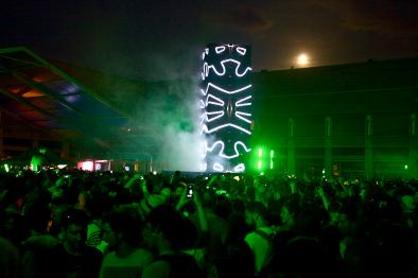 As dusk came, so did the end of Mute Records boss Daniel Miller ‘s set in the Village offering a glimpse into his 40 year history of working in the dance music industry, and then it was time Richie Hawtin’s Plastikman alias to act as the focal point for the finale of Sónar by Day. The first day of the festival was extended by an hour so he could present new music in the form of his Objekt show. An LED pillar stood erected in the centre of the SónarVillage all day looking like the Space Odyssey monolith, which only came to life when Hawtin stepped onto a raised plinth amongst the crowd when every other stage had closed. Like the Plastikman shows of a few years ago, the monolith provided a responsive graphical projection of Hawtin’s music, gloriously realised to be just as much an art installation as a headline show at a music festival, however in the space Sónar exists as pushing forward the delivery of electronic music, this was about as perfect a reason for an extended first day as you could have hoped to see.

The second day of Sónar continued the more experimental trend. Henry Saiz premiered his new project of performing live tracks from his latest album “Reality Is For Those Who Are Not Strong Enough To Confront Their Dreams” with a band made up of instrumentalists and singers he’s worked with which created a natural electronic show and DJ Der kicking off with abstract soundscapes before linking them with the classic beats of Detroit, Chicago and New York. 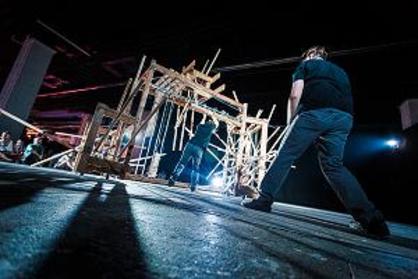 Canadians Martin Messier and Nicolas Bernier, who created their take on Luigi Russolo’s sound machine which they presented at Sónar 2010, got into their latest contraption to create ‘living music’, attracting an intrigued crowd as the used a wooden structure – the Machine Variation – to generate clangs and bangs which melded into a dramatic musical form. Its hypnotic nature was matched in the SónarPLANTA room, where the winning submission to a joint initiative by Sónar and the Sorigué Foundation was being viewed by curious festival-goers. Through a tunnel guests emerged in a large rectangular room to find unidisplay, an immersive audiovisual installation consisting of a wall of light and sound with a side mirrors that gave it infinite aspect. To watch the screen as the deep groans of the speakers echoed was to get lost in the lo-fi visuals. 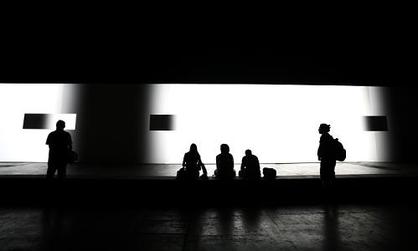 Back out in the sun Hucci was giving Sónar its first taste of trap in the Village ahead of the kaleidoscopic electronica of Bonobo and formidable selector skills of Theo Parrish but it was Jon Hopkins who would steal the night with his dramatic electronica blistering the walls of SónarHall and setting us up for Sónar by Night.

As ever, the vast Fira Gran Via L’Hospitalet hosted Sónar by Night this summer, the early set in SónarPub went to Barcelona’s Mr.K! followed by the heavyweight partnership of Norwegian duo Röyksopp and Swedish singer Robyn. Despite being the first show on their Do It Again global tour, this was an accomplished and spectacular show which took in the hits of the acts both together with tunes such as “The Girl and the Robot” and “None of Dem”, as well as apart with “Poor Leno” getting the loudest cheer. 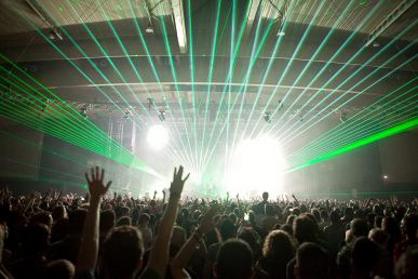 Their pop prowess was equalled in electronica geekery when Moderat followed in SónarLab. The joining of Modeselektor and Apparat brought an acclaimed first album which was followed up last year with the disappointing II, so it was pleasing to hear the trio chose to favour their debut in their set list. “Rusty Nails”, “A New Error” and “Les Grandes Marches” boomed down the narrowest of the main arenas, reminding us of why Moderat can be such a dramatic live act.

We swapped the drama for the more welcoming vibes when we shifted to SónarPub via a few rounds on the dodgems where we found Daniel Snaith working his Caribou alias with a live band that showcased new material that was every bit as sumptuous as favourites such as “Odessa” and the immaculate closer “Sun”, whetting appetites for a third album soon. Norway’s cosmic disco king Todd Terje was next on stage, getting behind his laptop and synth to take us on an intergalactic journey fuelled by piano chords. Of course the finale had “Inspector Norse”, yet with the subtle simplicity of tunes such as “Delorean Dynamite” and “Strandbar” he already had the Pub in his hand by the time its distinctive chords were heard. Terje looked a man in charge as he tapped away on his synth – delivering an accomplished set confidently.

We moved from Pub to Club to seek out Richie Hawtin next in his second appearance at Sónar this year. While his By Day set had been about the considered side to his music, this main room set switched into top gear of pumping Detroit beats broken up by his distinctive twisting fades and builds. It made for an energised end to the night in the Pub as neither Loco Dice nor The Martinez Brothers offered much to keep us at Sónar by Night until the end.

The challenging schedule of Sónar oftens means some sacrifices are required, and Sónar by Day suffered in favour of resting ahead of Sónar by Night. We did make it to the closing sets of Day however, catching James Holden performing The Inheritors live in the SónarHall. Joined on stage by a drummer and saxophone player, he twiddled knobs on his modular synth to generate the sounds of the dreamy album effectively, though the drums and sax made this set so special, particularly on closer “The Caterpillar’s Intervention” which seemed to erupt in the eardrums as the sax was blown for the final time and the drums bashed.

The eclectic DJ Harvey brought a close on Sónar by Day as we geared up for a final push through the night starting with Massive Attack. 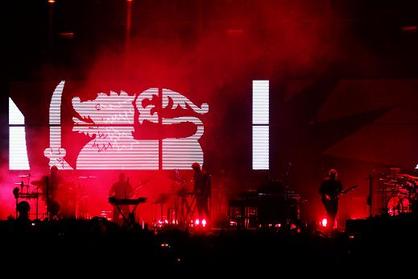 Bristol’s Massive Attack were playing Sónar 10 years after their previous performance and following a series of shows designed and staged by Robert Del Naja and film maker Adam Curtis in Manchester, Duisberg and New York. For their live performance, Robert again collaborated on a collision of music, art and political discourse which was upfront in putting slogans on screen, yet the music seemed tired in its delivery rather lessening the effect of the messages the group were trying to convey. A return to the more four-to-the-floor beats courtesy of Matthew Dear was warmly received by many, though “Teardrops” and Unfinished Symphony” were among the hits to really catch our attention. 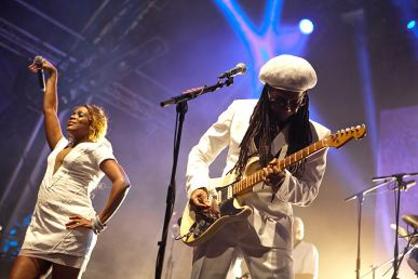 We couldn’t miss at least a taste of the legendary Nile Rodgers featuring with CHIC , who launched into a hits-only set which featured all his own tracks – either performed by him or written for others – in which you would be hard pressed to not know every song. “Good Times”, “Everybody Dance” and “Upside Down” got everyone dancing long before closer “Get Lucky”, but some of the crew (me included) broke off to see a wild drum and bass explosion in the Club from Rudimental. It’s rare to see the genre at Sónar, however there was wild skanking while 12 musicians, MC’s, organs, synthesizers, guitars, percussion and MPCs brought their tunes such as “Feel the Love” and “Waiting All Night” to life.

Following Rudimental we reconvened for James Holden b2b Daphni in the Lab where the pair were following up their meticulous live sets with a similarly thoughtful DJ set which married their music tastes and produced a soothing but very danceable 85 minutes. A final spin of “The Caterpillar’s Intervention” seemed apt to close, and then we made our way to the Pub for some pounding electro from Boys Noize. He was blitzing the crowd with his unrelenting picks when spots of rain began to appear. THis was initially fine to dance in the Spanish heat with a big beaming smile, however a sudden heavy downpour meant it would be a very wet – and challenging – end to Sónar 2014.