West London’s Boston Manor Park became a techno mecca for a day when Junction 2 Festival returned on Saturday, June 10th. Sonus Festival, Drumcode, The Hydra, LWE Warehouse and Into the Woods hosted five bespoke stages with throbbing 4/4 beats very much the order of the day and headliners including Adam Beyer, Joseph Capriati, Chris Liebing, Daphni and Jane Fitz. Mike Barnard and Ann McManus were there to see how the second edition went down. 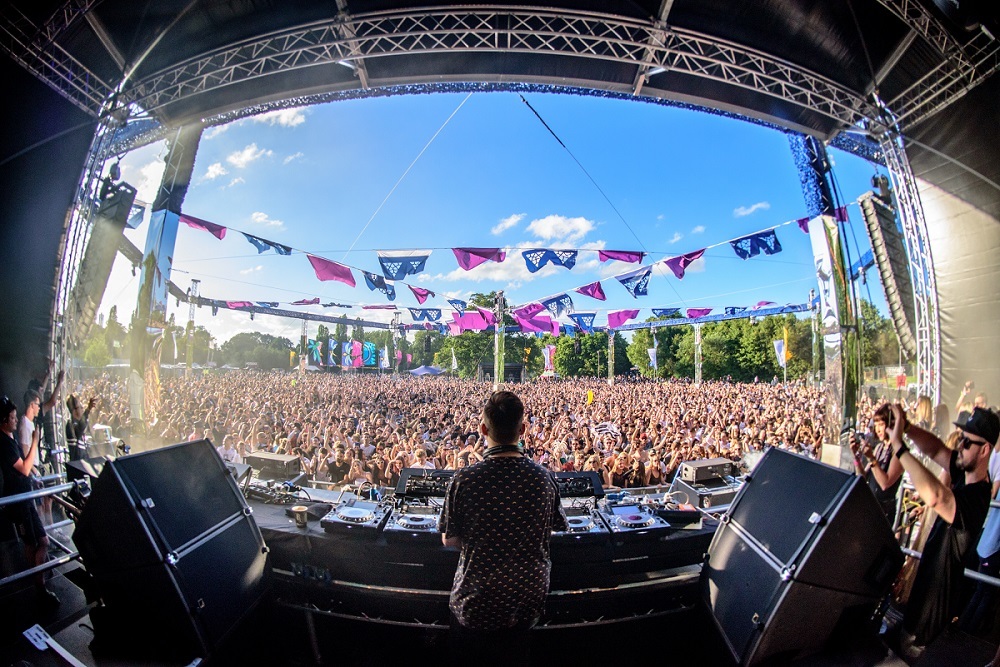 He Said: “The debut of Junction 2 on the London festival calendar last year was a real techno treat. Then just three stages, the slick production including impressive sound levels for an urban event and a mix of stages nestled in amongst a wood and under a motorway managed to transport us to what felt like an event away from civilisation. We were hyped for this year, but wondered if expansion of two new stages and the pressure of repeating last year’s success might be too much. Not so, as in the hands of promoters-of-the moment LWE back by solid brands, Junction 2 was another winner.

“Glorious sunshine greeted us as we desmbarked from the train at West London’s Boston Manor station, and we made our way eagerly to the park. Gates had just opened, so there were plenty of people on the same 10 minute walk along the urban sprawl with the entrance to the park coming into view under the M4 rising into the air. We turned into the park under the flyover to be greeted by a moderate queue and we were soon inside, looking down a concrete corridor towards the Drumcode stage hidden beyond a hill. We grabbed some tokens and headed into the first field where the Warehouse and The Hydra stages sat as last year, the Warehouse, a completely enclosed area, made to look like a permanent structure from the outside vibrating from the bass from Charlotte De Witte’s tunes inside while The Hydra had an open-sided tent allowing the more dulcet tones of Dolan Bergin to flow across to the outdoor bars. 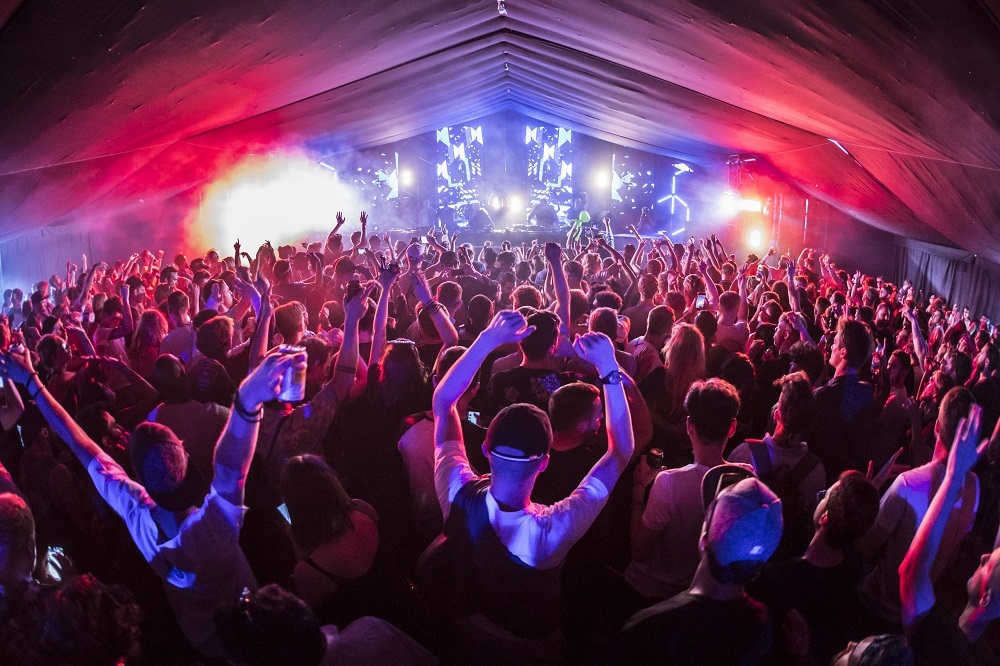 “We strolled across the field and between the trees to what last year was simply a large field reserved for a scattering of food trucks and blissed out revellers to find the Sonus Festival stage which transformed the field into Junction 2’s centeral hub. A huge outdoor stage faced into the field with a hexagonal lighting rig towering over the dancefloor where Eagles and Butterflies was warming up the crowd with some blissed out beats. On the opposite side of the field were food trucks, bars, hammocks and plenty of seating. We grabbed a drink and headed towards the woods where we’d see disco balls and other glistening decorations hanging from branches, a giant synth to play on and the Into The Woods stage - an intimate space in a small clearing where the DJs played from what looked like a birdwatching bunker that could fit no more than 100 people. 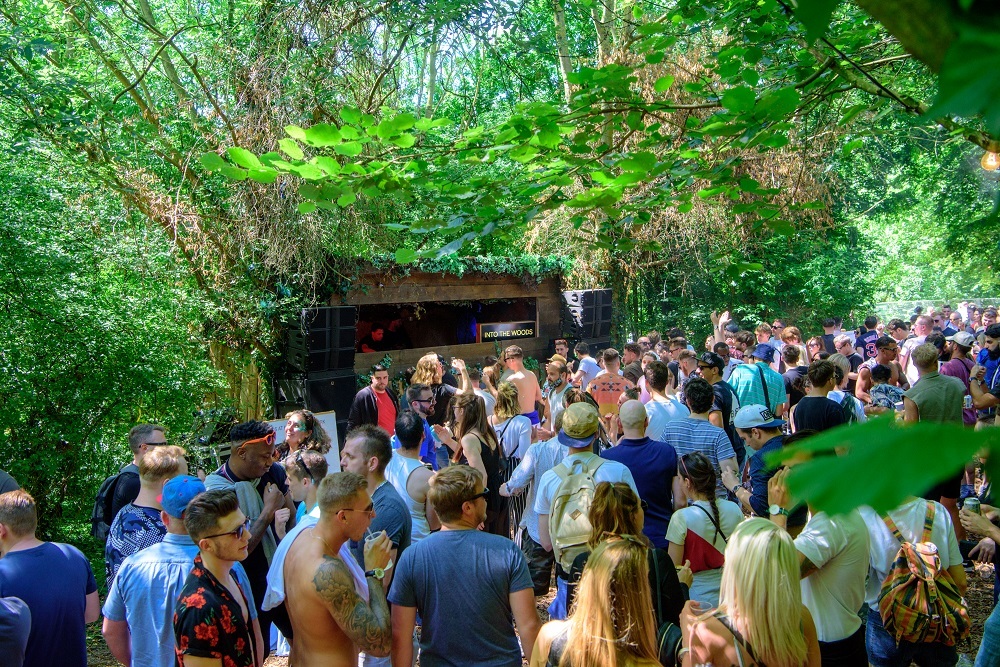 “Pausing to note we must return to the Into The Woods stage later, the next port of call was to see how the Drumcode stage was shaping up. The walk towards the distant stage makes for an epic view, as you can see the flashing lights of the rectangular stage LEDs from afar, and the music got progessively louder as we approached. Reset Robot had already attracted a good number of initial Drumcode fans down to the further reaches of the festival. Having completed our first tour, we went back to the Warehosue to catch Charlotte De Witte’s powerful set which was working up a sweat for those busting the moves. The sensuous Cosmin TRG tune ‘In Your Body’ dropped after a spacey interlude with a cheeky smile from De Witte, clearly loving the connection she was making with an early set.

“With the sun still beating down outside, a small break was needed from the darkness of the Warehouse back at Sonus where the hammocks were filling up while Eagles and Butterflies upped the tempo. Having topped up the burgeoning tan, we opted for Ø [Phase]’s live set in the Warehouse which would be the most challenging hour of the day, but also the most rewarding. The deep, dark beats ebbed and flowed organically while Ø brought in lighter tones that would subtly engross you before he slammed in a new beat. It may have been only 3pm, but by the end of his set you could have been forgiven for thinking it was 3am in an underground club. We’d follow Ø with the hypnotic vinyl grooves of Willow and DJ Koze’s funky bombs at The Hydra from the comfort of the Frontier Bar tables we used as a meet and greet space while our friends arrived to join us or passed through en route to another stage. 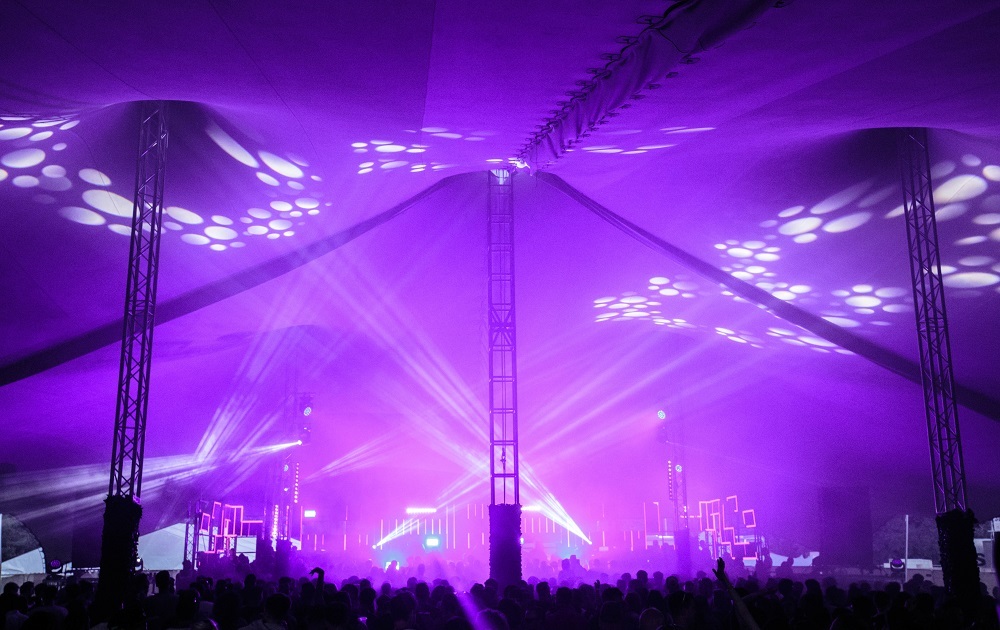 “The next portion of the day would prove to be the most excitable. Nearing 4pm, we took up a central position by the pillar in the middle of the Sonus stage dancefloor with DJ Tennis rounding off his set with the impossibly jolly ‘Let’s All Chant’ by The Michael Zager Band for an explosion of disco moves from the crowd which set the mood for the next few hours. The sun kept shining as Sam Paganini stepped up to the decks to deliver a party techno set bouyed by Darren Emerson’s ‘Deadlock’ early on and an increasingly boisterous mass assembling in front of him throwing their hands in the air and whooping at every opportunity. Recondite would follow with a sumptuous live techno set as the afternoon turned to evening, then we got blasted by Planetary Assault System’s full-throttle 4/4 with a cosmic twist in the Warehouse. 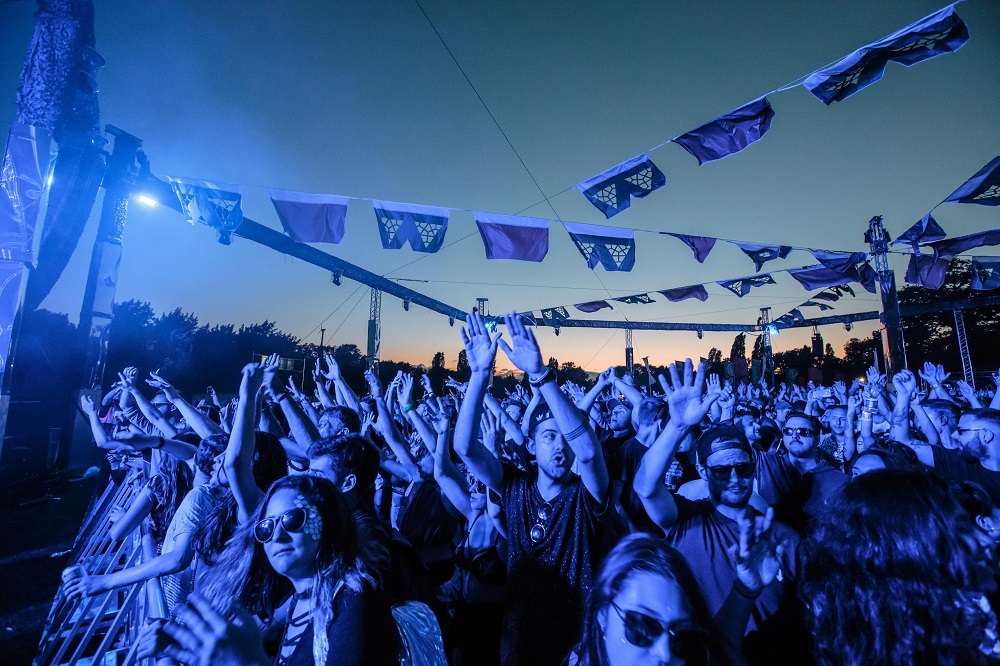 “Realising that our remaining time at Junction 2 was in short supply, we ignored the main stages go back to Into The Woods where Freerotation resident Jane Fitz was serving up house and techno swerveballs to a now-packed clearing in front of her. By now the woods themselves were being used to sit within and get some shade from the sun, making for a free party vibe that seemed cut off from the rest of the festival - a truly enchanting experience to savour. We spent a good hour chatting away to others about the festival’s many merits, but the ones that kept being repeated were the soundsystems, attention to detail throughout the site and quality of the sets. We’d finish Junction 2 at the Drumcode stage where headliner Adam Beyer surprised us by mashing Umek’s famously beatless electro stormer ‘Gatex’ with pumping beats for maximum dancefloor impact.

“It was with some sadness that Junction 2 had to come to an end, or indeed that there wasn’t a second day. Blessed by sunshine and a balmy evening, the mood on site was always positive and the stages had unique vibes to savour. If last year’s Junction 2 set a foundation for hosting a festival in Boston Manor Park, this year its potential was realised by expanding in the right ways to retain both intimate spaces and grand main stages. Junction 2 surely deserves a place alongside the great European techno festivals. 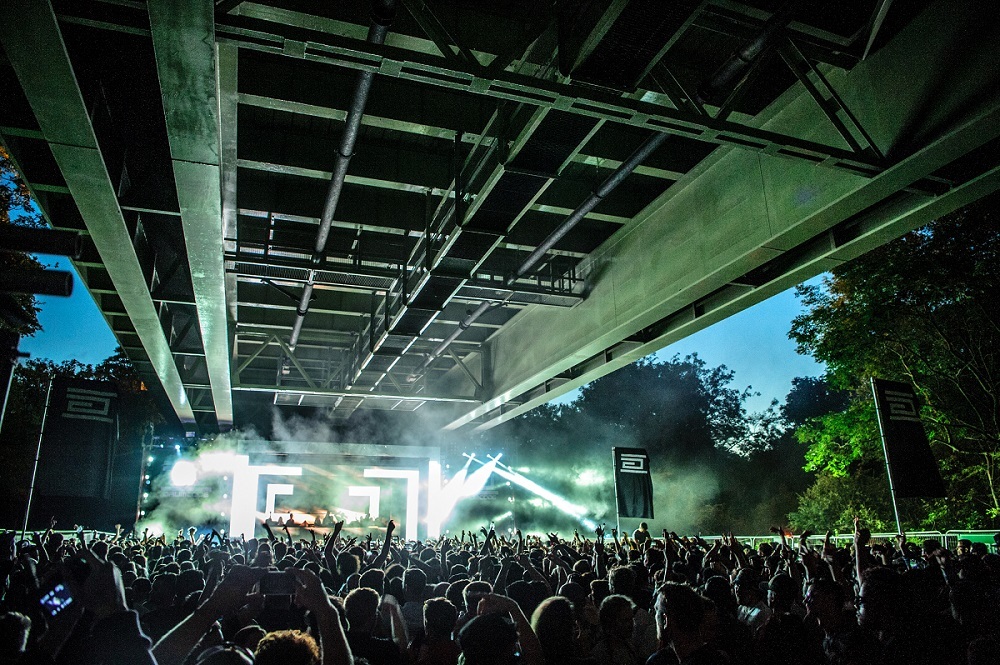 She Said: “I had been building Junction 2 up all year to anyone with even the vaguest interest in techno. I had hyped it up so much to anyone that would listen, that when an entourage of friends began to assemble, I worried that I might have gone too far.

“But, to my absolute delight, arriving on site as the gates opened it was clear that the event looked to be bigger and even better than its debut. There was significantly more space and the atmosphere was outstanding. The addition of the Sonus Festival stage in an open field created the ideal setting for catching the sun, while the clearing in the middle of the forest hosting Into the Woods added a very unique, intimate space.

“First on my list of must-sees was Studio Brussel mainstay Charlotte de Witte. Despite the sunshine, the warehouse-esque Relentless tent was hosting an excitable crowd who were lapping up de Witte’s transient set from the off. It was great to see her engaging so much from the crowd, sharing smiles and jokes as she sweetly pretended to try and work out the track requests a backseat driver in the front row was given before shaking her head and dropping a fluid stream of dark techno beats. 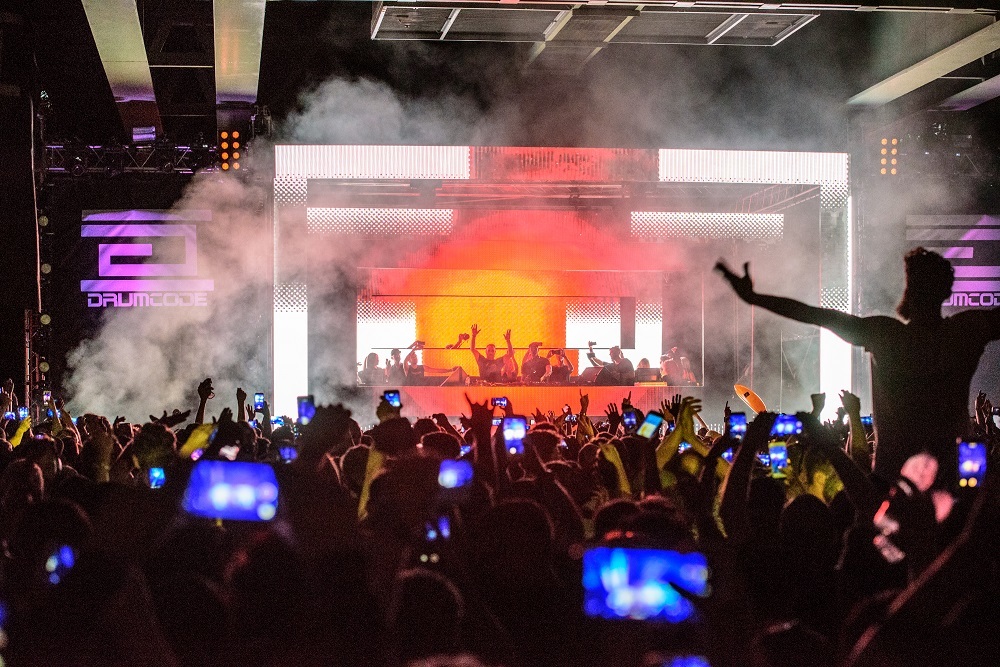 “After a short sun and espresso Martini break, we were back in Relentless for an even darker and stormier techno set courtesy of London producer Ø [Phase]. Sweeping the floor with a set that played homage to the Detroit sound, Ø [Phase] kept the crowd guessing. With every drop, mates would turn to each other with scrunchy “oooooh ja” faces that you can’t help but make when the beat takes a naughty new dip.

“Caching the last of a funky set by DJ Tennis, the group snagged ourselves a spot in the middle of Sonus for Sam Paganini. Sam has a fabulous team and gets a lot of love from the Drumcode set, getting a lot of airtime on Drumcode Radio. Making an unfair assumption, I expected to hear a lot of the big Drumcode tracks that I’ve over-replayed. In reality, Paganini’s set was the highlight of the day for me and everyone else I spoke to. Varied throughout, Paganini played an energetic set that seemed lighter than the sound he rose to fame with like his tune ‘Rave’. He matched his sound perfectly to the light, sunny weather and the enthusiasm of the crowd was incredible. 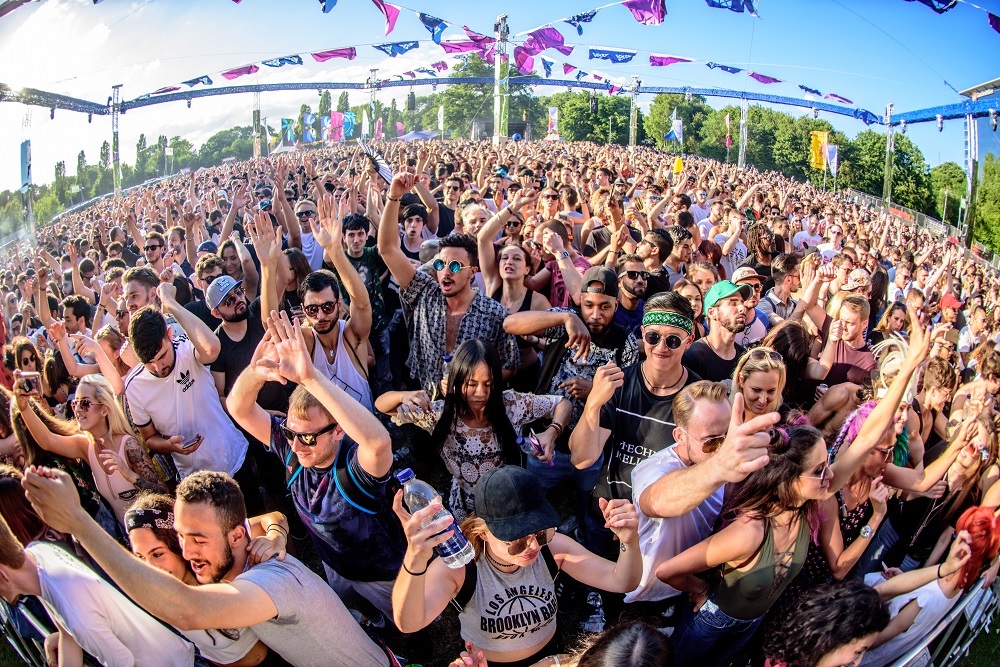 “As the sun descended, we followed the scattered fairy lights through mud tracks until we found Into the Woods. The entire dance space was filled up as Jane Fitz played an ambient/psychedelic set that provided the ideal down time between the fast paced sets of the afternoon and the thunderous finale promised by Ben Klock and, ultimately, Adam Beyer. 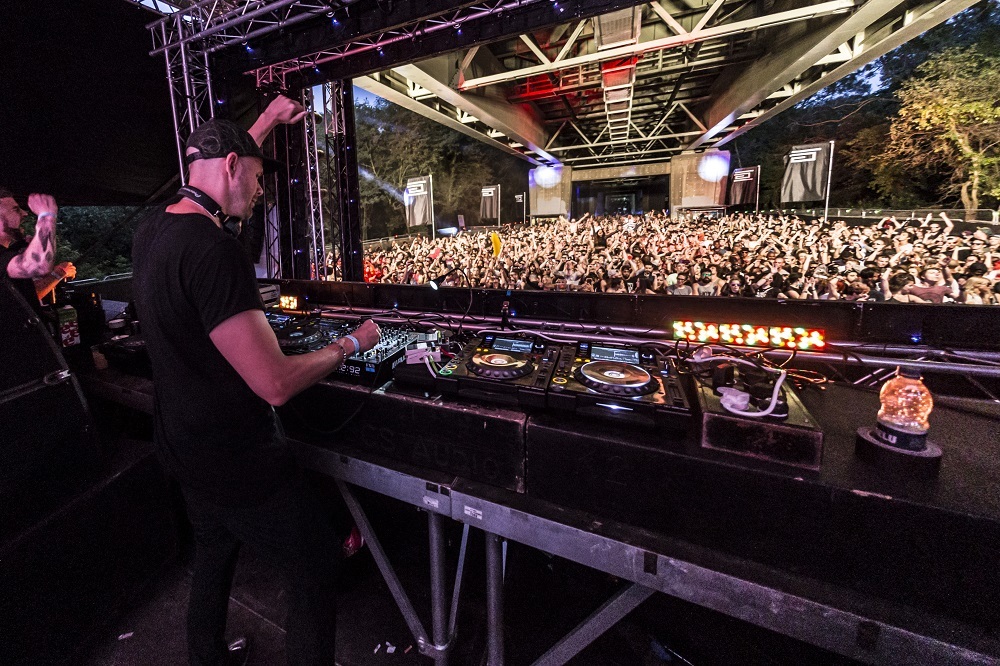 “The corridor under the M4 hosted the Drumcode stage, a truly unique setting. Having dedicated the majority of my time to this space for Junction 2’s debut, I had been keen to check out the other stages and DJs I had not yet seen - particularly given the sunshine! But Drumcode was the place to go out with a bang. The light display was on point and the sound could not have been bettered as Ben Klock drummed out an industrial set. Drumcode boss, Adam Beyer followed. The pace had been fast all day, but Beyer reinvigorated the crowd with an outstanding finale. He finished with a build up that left us all ready to get going again - leaving us hungry for more! Leaving with tapping feet, the resounding consensus on the train home was that the day had surpassed all expectations. Expect next year to sell out fast.”