50,000 dance music fans headed to GlobalGathering for two days of raving on Long Marston Airfield last weekend; here we present the differing viewpoints from two of them in our first ever He said/She said feature. Mike Barnard and Ann McManus give their (serious, kinda) opinions on the 14th edition of the long-running festival in Stratford-Upon-Avon, this year headlined by Chase & Status, David Guetta, The Prodigy and Alesso.

All this amused the hell out of me like a Lonely Island sketch.

He said: “As an old chap wearing black shoes, white socks, no shirt and ill-fitting chinos with six different coloured ice poles protruding from his pocket plodded past me in the VIP area, I could only marvel at the sight. In fact, it was one of the many times I found myself grinning like a madman at Global this year.

I witnessed a couple of lads on the campsite who seemed to spend their whole time on the Saturday bickering in the campsite, the most incredible shuffling going on during the hottest part of the day to Skream and Tensnake’s back-to-back set and the OTT spectacle of Guetta and Alesso seemingly trying to out-do each other with their downright outrageous displays.”

“I think Guetta won overall: he managed to get a taller platform to stand on and more LED coverage per inch of stage, however Alesso at least sounded better on the mic even if he did have some dubiously self-congratulating visuals of his face – sometimes two of them – violating the crowd’s minds. But all this amused the hell out of me like a Lonely Island sketch. The more on-beat jokes came from the quality sounds of Shadow Child’s retro selections, an astute mix from Eats Everything and Pete Tong back-to-back, the clever pairing of Sasha and Nic Fanciulli, the old skool trance of some matey I never caught the name of and marvelling at the cheeky house of the glitter-jacketed Peeping Tom’s closing set.

“Global was full of character: and I must say, I wish Guetta and Alesso all the best in their comic rivalry. Perhaps only the old chap with the ice poles sticking out of his pocket has the right to judge the eventual winner.” 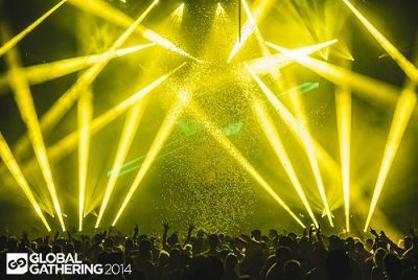 Everyone was polite enough not to tell us to give up our front row space to allow someone who would ecstatically have their face melted by the obscene flame cannons to “Selfie”.

“Arriving late on Friday meant missing a few of the acts I’d most looked forward to such as Hot Since 82 and James Zabiela. A quick debrief in the beautifully-decked-out VIP area, featuring hot tubs and DJ Mag hosting the decks, we decided our strategy was to sweep the tents before setting up in the Defected in the House tent.

“For amusement’s sake, missing the artists I wanted to see meant time to take in the New World Punx synchronised fist pumps and the spectacle that is David Guetta’s world-renowned clapping show. We befriended others in the crowd who were watching for a laugh. Everyone around us was polite enough not to tell us to give up our front row space to allow someone who would ecstatically have their face melted by the obscene flame cannons to “Selfie”. A huge Defected fan, Shadow Child was a high note to finish on, delivering anticipated remixes of Dave Spoon, SKAM and the awesome Hot Since 82 remix of “So High” and veering to the Moda Black sound with surprises like “Renegade Master” that got the crowd bouncing.

“A full day on Saturday gave enough time to get warmed up for the action (literally – hottest day ever!), taking in afternoon sets from Tensnake B2B Skream featuring shufflers with perfectly-toned backs (they were sweaty in a way that looked like they had been dipped in gloss rather than overheating), Jaguar Skills being ridiculous, some welcome hot-tubbing with more friendly chums and on to a series of quality sets (with the exception of Alesso) that led to my opinion of GG to rise, reaching its climax at Pete Tong B2B Eats Everything. While their set bore Pete Tong’s signature trait of picking outstanding songs that never gained the traction among the general music fan they deserved and lacked the techno/garage/jungle edge Eats Everything adds, it was one of the best sets I’ve seen in a very long time. As such, the perfect wrap up to a festival I’d snobbishly disregarded as being too mainstream. Mainstream fun. Hipster slap.”

Read the full review of GlobalGathering 2014 later this week.