House, funk, soul, dancehall, disco and garage legends were brought together when Found Series hosted a second 51st State Festival in North London’s Trent Park on Saturday, August 6th. With famous brands such as Groove Odyssey, Back to 95 and We Got Soul, the focus was very much on the old school with Roger Sanchez, Body & Soul, Crystal Waters and Kings of House performing. Mike Barnard and Ann McManus were there. 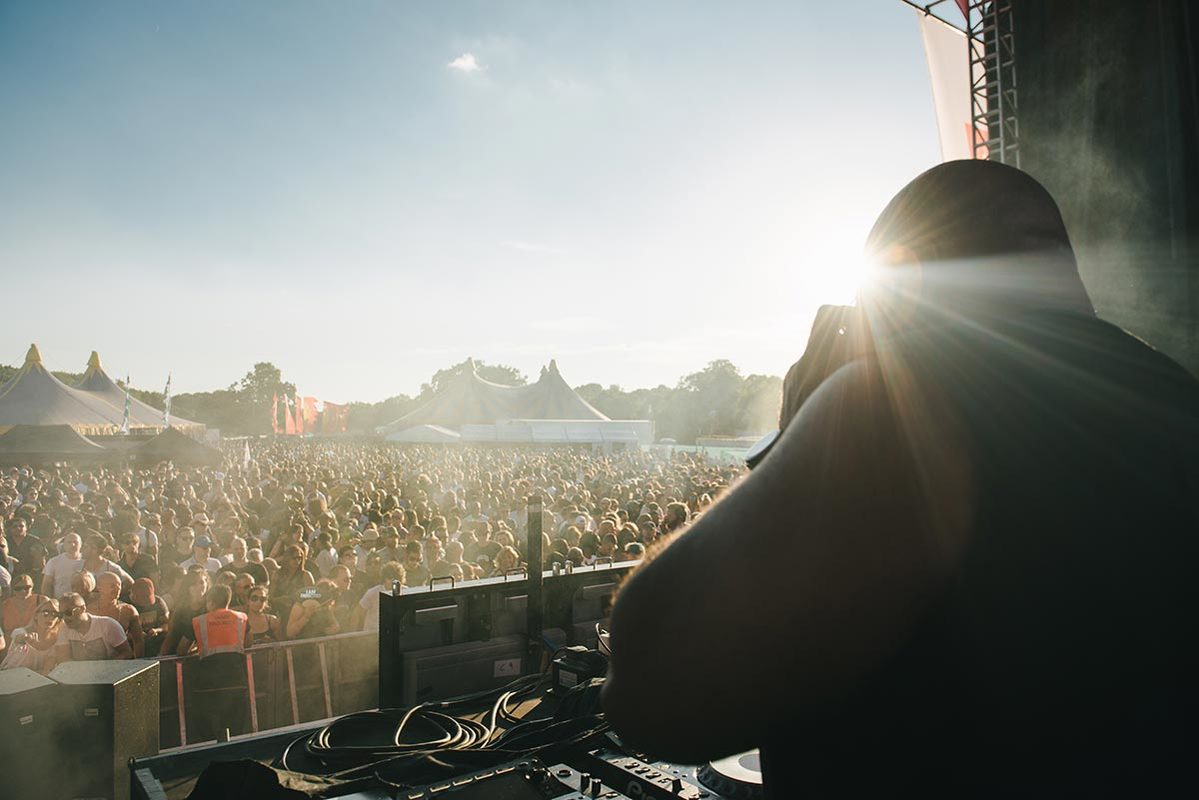 Crystal Waters was all smiles and flanked by impressive dancers as she sang “la da dee, la dah dah” to the delight of the Backto95 crowd.

He Said: “Last year’s 51st State drew praise with favourable comparisons to Southport Weekender’s 28 year history of hosting 52 festivals at holiday resorts which focused on the soulful end of the music spectrum until the final note was heard in May 2015 at Butlins Minehead. This year’s programming echoed 2015 so there were high hopes for another day of great house music, especially with a gloriously sunny day forecast. We entered just after 1pm, first stopping by to see Feelings residents DJ Karl Karlson and Brian Summers warming up the VIP tent. Their apt sunshine vibes were main enjoyed by the early attendees chilling out on the cushions in the shade rather than attempt to strike up a dancefloor in the heat but it was a good introduction to the day. 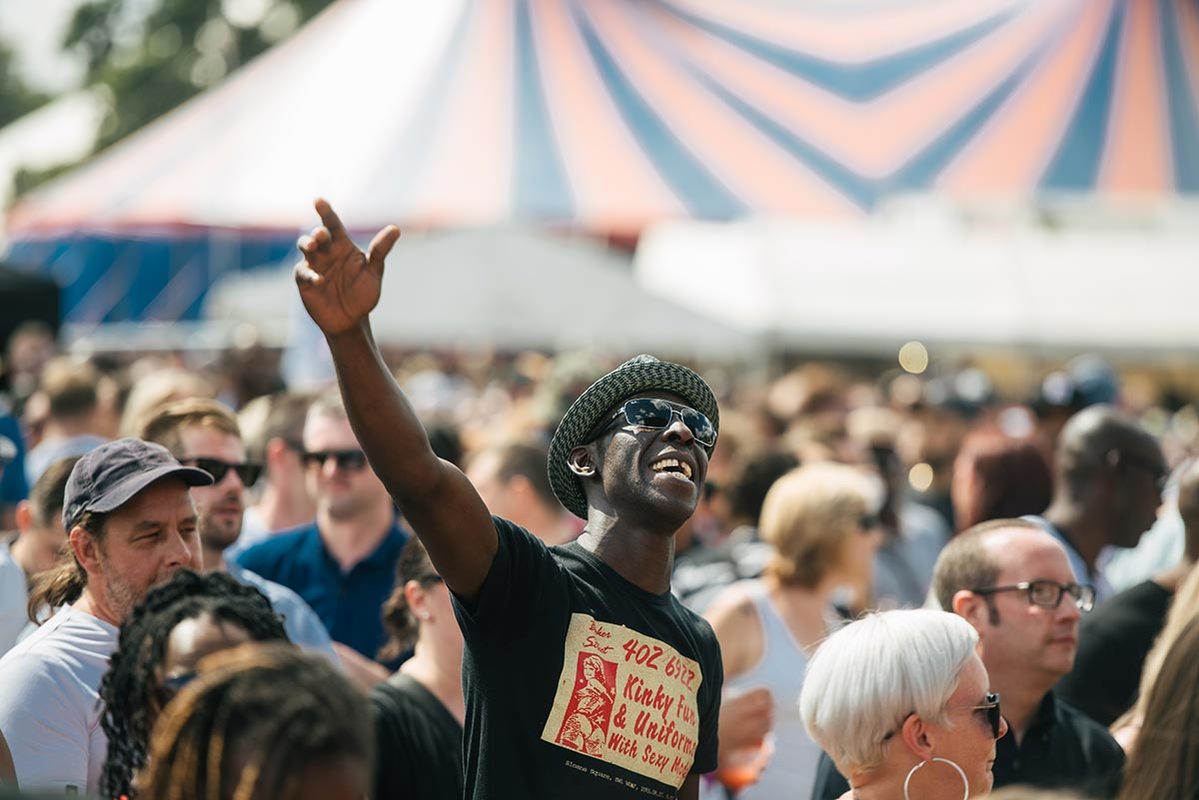 “We quickly emerged into the festival proper to have a look around the site where Marshall Jefferson was on the main stage working the crowd up nicely with classics such as Inner City’s ‘Good Life’ and Bucketheads ‘The Bomb’. The We Love Soul tent was packed already - as it would be all day - so we wandered through the Groove Odyssey tent on our way to Backto95 where Ramsey & Fenn were dropping Black Magic’s ‘Freedom’ amid a slew of garage gold. The tunes just kept coming with Opolopo in VIP drawing a feel-good crowd thanks to Randy Crawford’s ‘Street Life’ while Todd Terry dropped back-to-back big hitters on the main stage such as CeCe Peniston ‘Finally it’s Happened to Me’, Daft Punk’s ‘Burning’, Junior Jack’s ‘E Samba’, Blue Boy’s ‘Remember Me’ and a sprinkling of Justice v Simian’s ‘We Are Your Friends’. 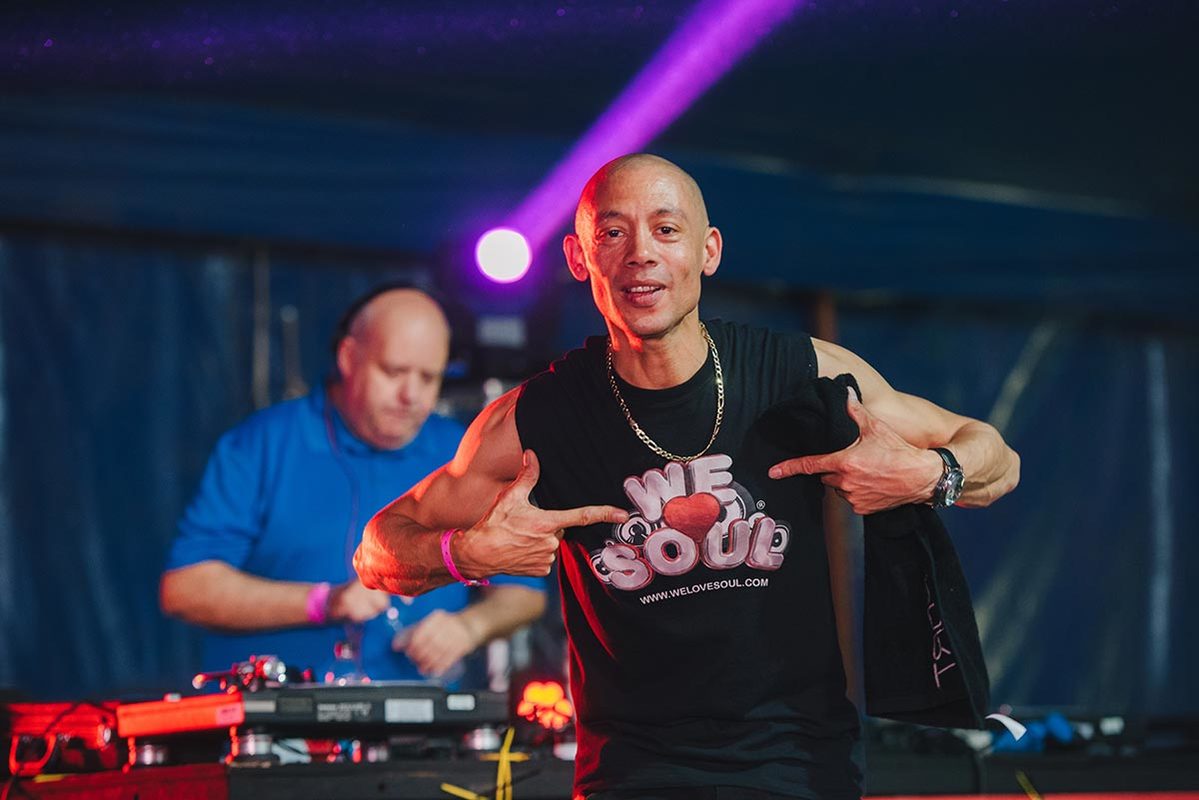 “While there was no complaints about the music so far, there was a very obvious issue arising: the queues inside. Snaking lines from the two token points indicated a woeful lack of booths, made little better by the queues faced at the two bars. This was an issue at Found Festival in Brockwell Park in June so it was frustrating to see much of the crowd to be able to enjoy the music with a drink in their hand or missing some of their favourite acts for what seemed like a privilege to have a beverage. Though water was made available at the front of stages, the Found Series organisers will need to roll up their sleeves and really address some serious issues with their event planning to rectify what is becoming a worryingly regular issue at their festivals.

“Aside from the queues, the music continued to deliver with Victor V working up a sweat in the Hot Wuk tent thanks to Valso Moko’s ‘Johnny’ and ‘Pon De Floor’ by Major Lazer, as well as playing an extended set to keep the crowds happy as Dawn Penn was delayed. Sadly we didn’t catch Dawn as we got caught up bopping to the Basement Boys who closed thier set with Ann Nesby’s ‘Shelter’ though they had to play on when Dimitri From Paris faced technical issues which seemed to put him off his set. We opted for Roger Sanchez playing under his S-Man moniker which seemed to have the main stage dancefoor all smiles in the late afternoon sun thanks to Byron Stingley’s ‘Everybody Get Up’ and Ultra Nate’s ‘Free’. We’d finish up catching parts of two famous teams of three behind the decks: Body & Soul then Kings of House with a Crystal Waters interlude. 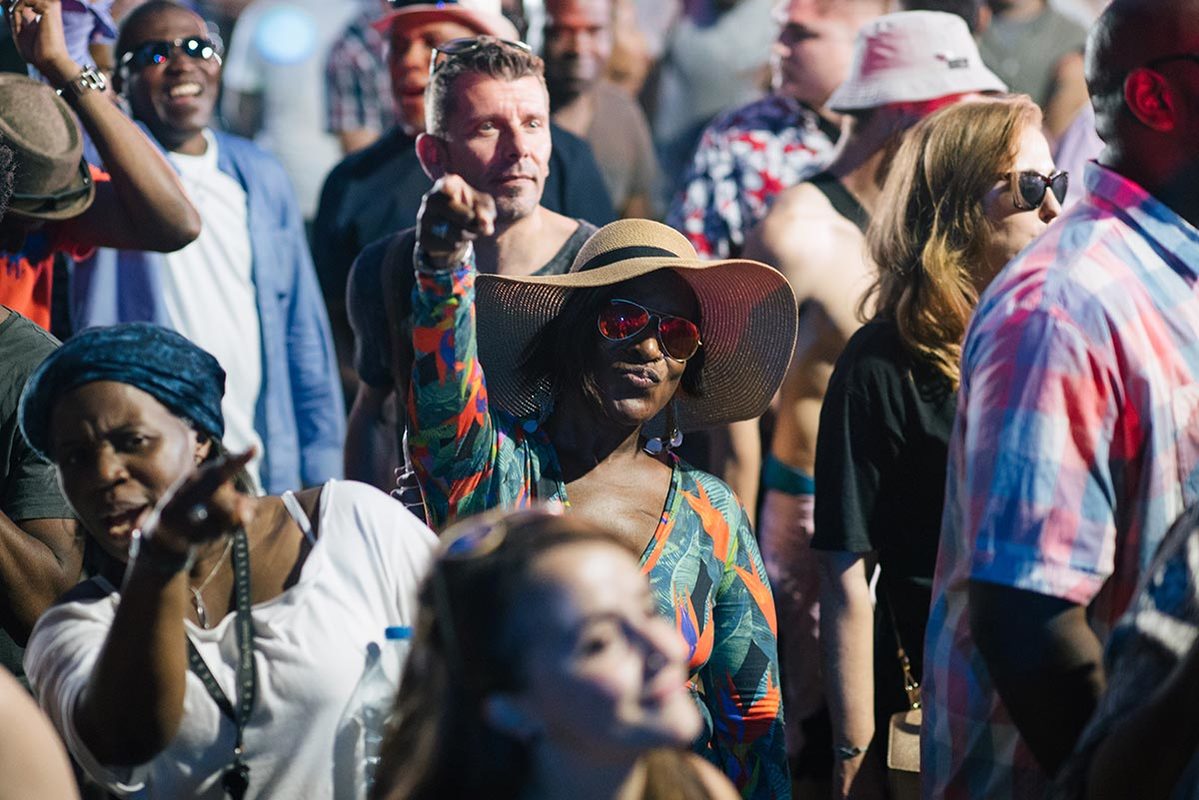 “The Body & Soul trio of Joe Clausell, Francois K and Danny Krivit were lapping up the vibes in the Groove Odyssey tent, of note was Clausell working the mixer to euphoric effect, then we headed over to catch Crystal Waters perform ‘Gypsy Woman’ live - a special moment as the ground-breaking tune is now 25 years old. Crystal Waters was all smiles and flanked by impressive dancers as she sang “la da dee, la dah dah” to the delight of the Backto95 crowd, though it was a shame she didn’t get more of an introduction ahead of her track. Her four minutes on stage were something of an enigma, she didn’t milk it at all, and in a blink of an eye she was gone - still beaming away, job very well done. 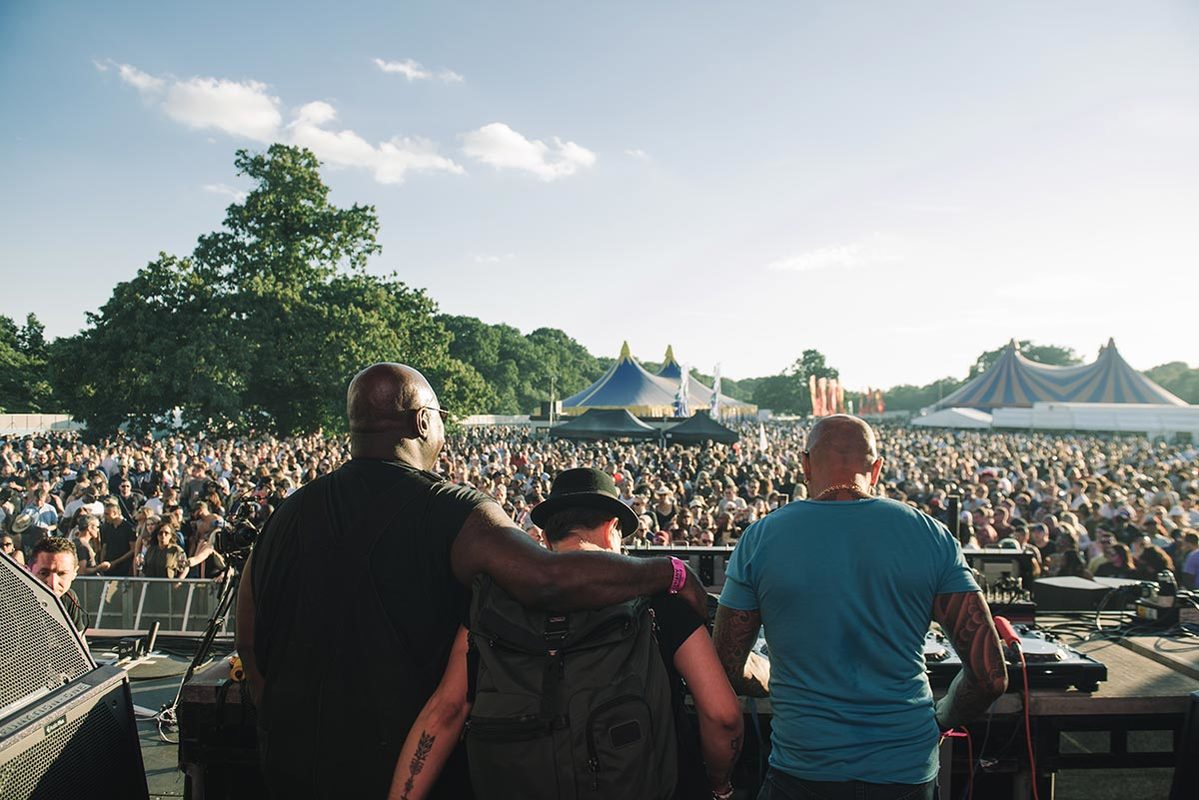 “We finished the day back at the main stage for Louie Vega, Tony Humphries and David Morales - aka the Kings of House. They’ve played together for so long that they looked at home with six arms reaching over the decks and mixer while lapping up the crowd’s love. Though there was nothing surprising about their set - and Barbara Tucker’s stage hosting of course meant Louie Vega’s anthem ‘Deep Down’ written under his Hardrive alias with Tucker’s vocals had to close the festival as she sang along live - it brought the curtain down on the day nicely. 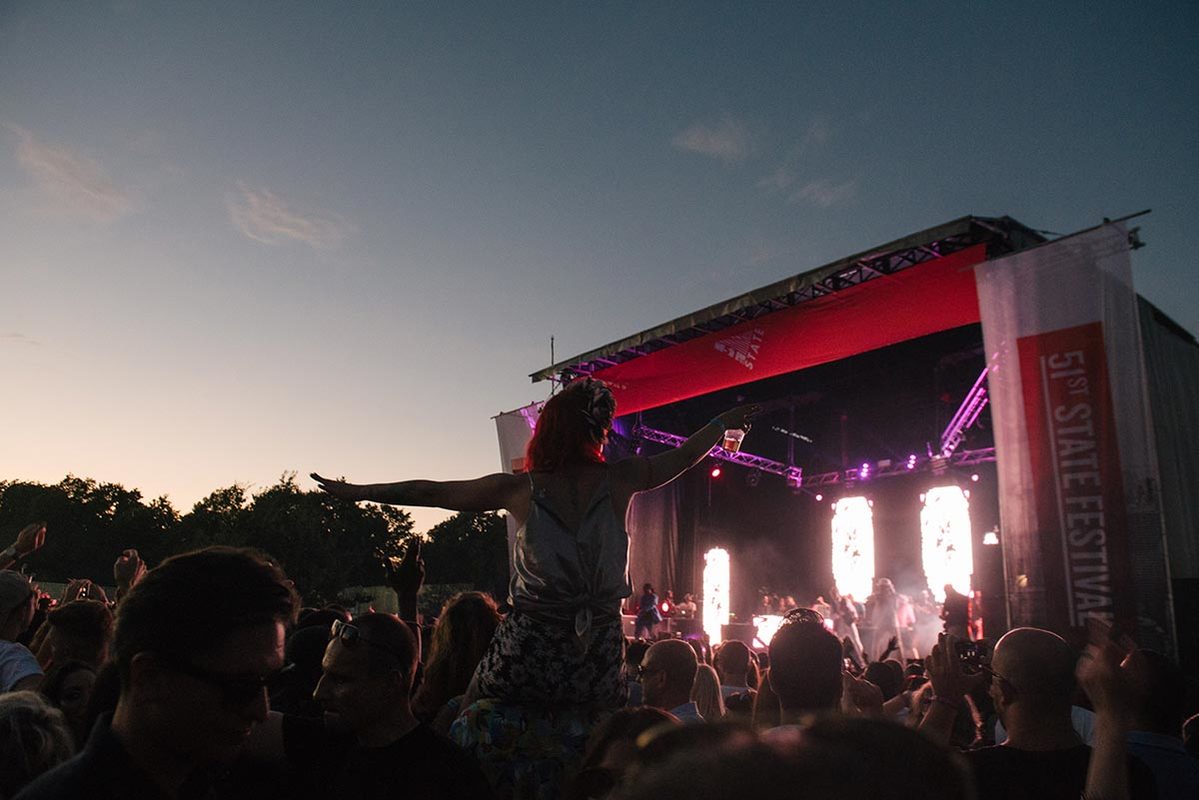 “Next up for Found Series is Moondance in Olympic Park for a celebration of rave culture in association with their United brand. Here’s hoping they can prove they can put on a fully functioning festival and restore confidence their 2017 series can give the music they book the right environment to have fun and appreciate all their excellent bookings without queuing too long for a drink.” 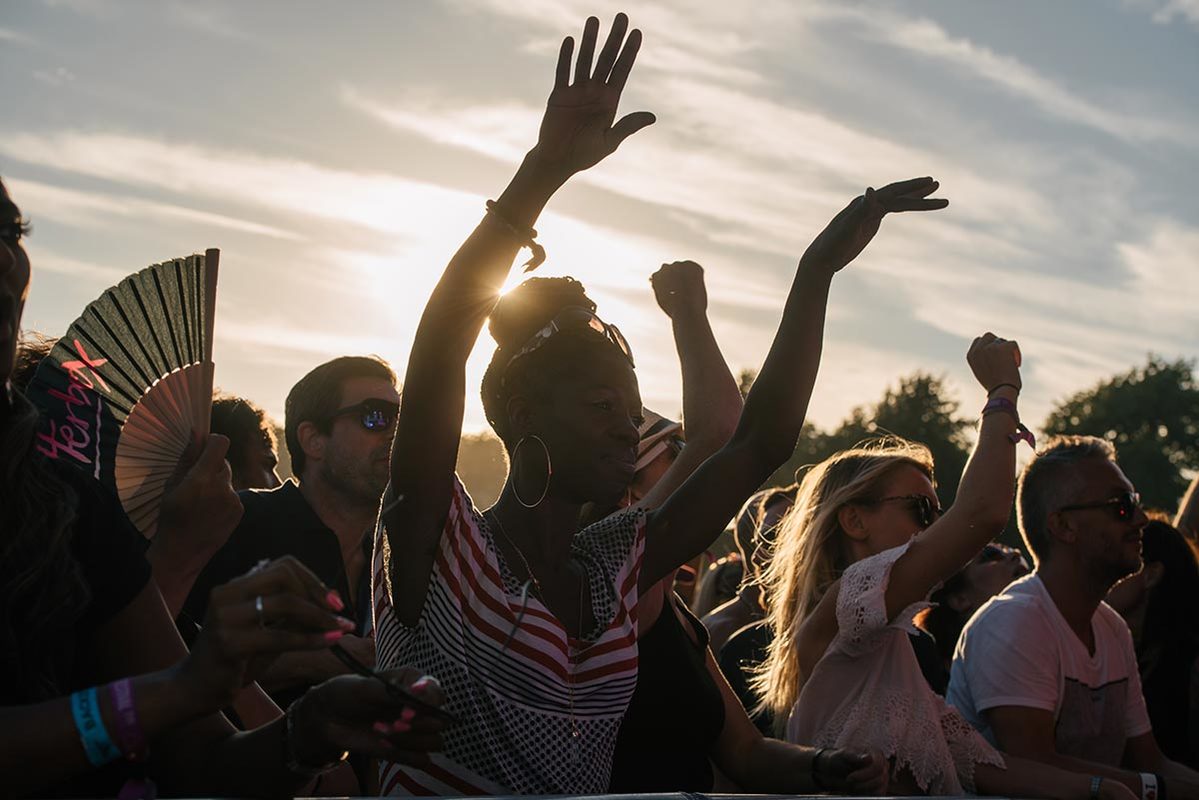 Joe Clausell leaned back as he cranked up the bpm evidently feeling the moment and thriving on the admiring feedback from the dancefloor.

She Said: "Waiting in the artists’ queue in the baking hot sun, fellow queuers were shifting uncomfortably in the lack of shade. Trying to lighten the mood, a few of us joked about the point of the queue, the dogs and vans we had seen parked right beside the fences – not a smart move if you’re trying to stop jumpers. Misunderstanding the jokes, the security guard asked us to guess how many jumpers they get each festival. Once we’d had a punt, he informed us it was “F*** loads.' He proceeded. “How many dogs do you think we have? F*** loads.'

“Seeing we were not going to get any concrete answers from this man about anything, we had no choice but to submit to the fact that there was not any real reason we were all waiting to get in. In hindsight we didn’t wait too long. This was particularly fortunate for the DJ who was supposed to be playing already, but the nonsensical queues were an unfortunate theme to the day.

“It was only 1pm when we got in but the site was already buzzing with activity, with the Backto95 tent blasting out some nippy garage tracks; We Love Soul absolutely rammed and VIP filling up gradually. Feelings duo Brian Summers and DJ Karl Karlson greeted the VIP crew with lighthearted disco. Connie’s ‘Experience’ hit a sweet spot, sending a very excited chap wearing a fantastic silver backpack into a Go-Pro frenzy, dancing round the VIP arena involving as many people as he could in his movie. 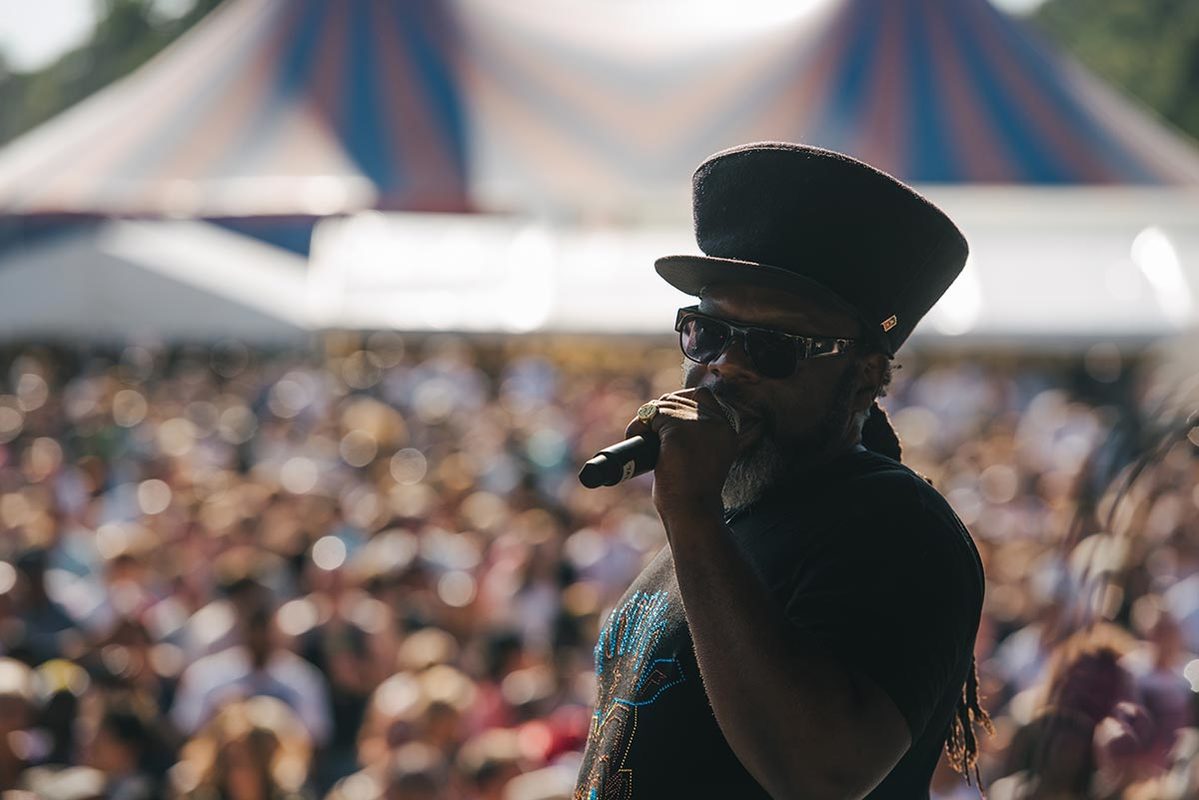 “Feelings handed over to Swedish boogie master Opolopo who moved the sound to jazzier, fuller bodied house. Moving back to the main stage, Todd Terry was working the developing crowd. Junior Jack’s ‘E Samba’ dropped, which, like a lot of the music I heard over the course of the day, this is a track that featured on so many compilations and got so much air time when it was released, but I never got enough from it to ever consider it as a track you would drop to get the crowd going. Here at 51st State the fantastic up-for-a-good-time mood turned back round track into thumping beats. The vibe was unique.

“The artsy Dimitri from Paris has built a big London fan base through regular nights at XOYO when he’s not hosting Glitterbox Ibiza. I wondered how he would manage to spin in a tux as he frequently does, defying the heat of the clubs with his insistent chic, but thankfully (for him) he had opted for a bow tied merino wool polo shirt. The Groove Odyssey tent had filled up in anticipation, but issues with the decks seemed to delay Dimitri from getting started. As he began loosening the collar of his shirt, hand on hip, it looked like things were getting sassy. Fortunately The Basement Boys were delighted to prolong their set and distract the crowd from the late start, dancing around the stage and keeping the mood up with Kenny Bobien’s ‘You Gave Me Love’. Sadly for Dimitri, when the technicians finally got his kit up and running, the long build up was let down by fairly underwhelming funky house, albeit with some classy piano riffs. 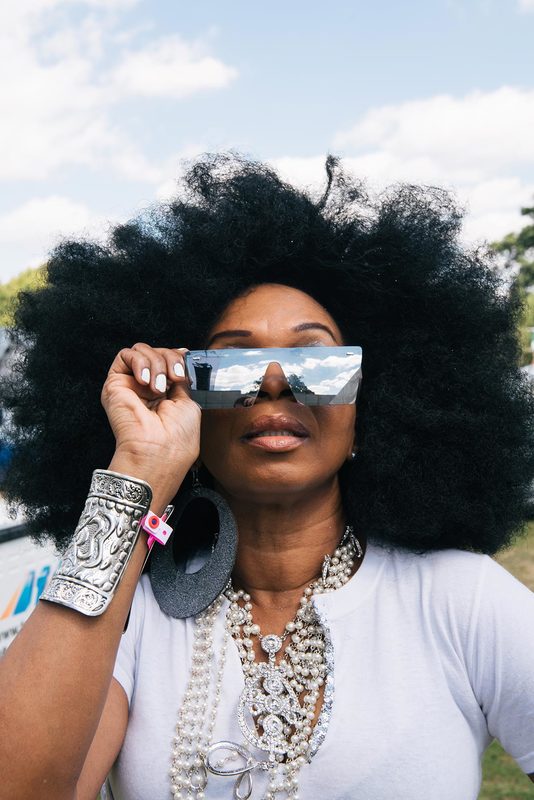 “One of the highlight sets of the day for me was Body & Soul’s set. Putting together three house music legends sounds like a recipe for disaster – too many cooks. No so for Body & Soul. Together DJ-legends Francois K, Danny Krivit and Joe Claussell combine forces staying true to their distinctive sounds, yet playing with a shared energy, like an immaculate b2b2b. Joe Claussell experimented with a series of world sounds, hitting a special affection with a samba groove that was injected with a thudding bassline. He leaned back as he cranked up the bpm evidently feeling the moment and thriving on the admiring feedback from the dancefloor.

“Short vocal acts had provided an unusual but well-worked interlude to the long soulful house sets, one of the most hyped being Crystal Waters. She conducted the stage with effortless elegance, the audience lapping up her full hearted rendition of timeless classic “Gypsy Woman” accompanied by her crew of well-toned dancers, who were shirtless with smoking jackets. Not bad work for a lady of 53! She stopped for a chat and breath of fresh air with us afterwards sealing in my respect for her, before she was swept away by the dance crew to enjoy the rest of the night. 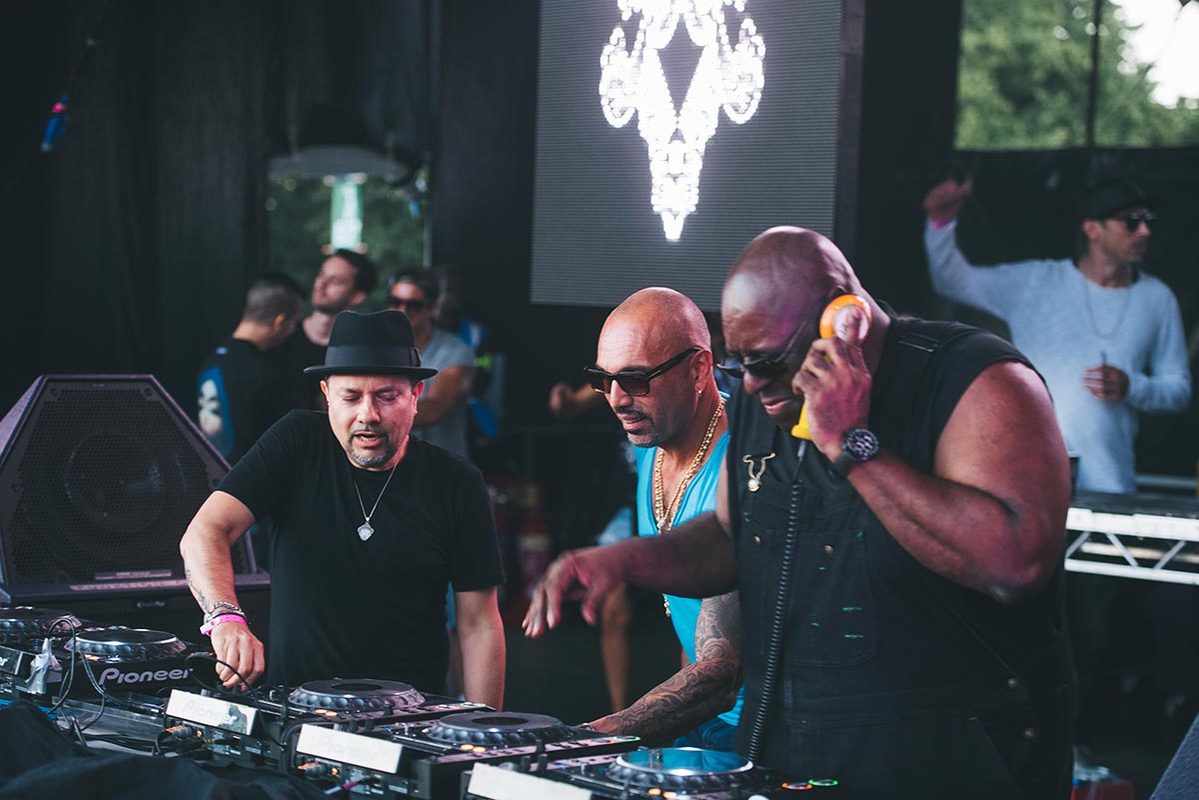 “Closing the main stage were Masters of House. Masters at Work left me such profound memories at last year’s event, I set my expectations a little high. Kings of House, another big name trio consisting of Louie Vega, Tony Humphries and David Morales, played a decent but unremarkable first hour of soulful house before injecting a more severe sound that made clear we were reaching close. Everyone in the crowd made sure they put a solid effort into throwing the day’s final shapes. There had been a few major hiccups – huge queues for drinks tokens, no water machines and a few schedule change s- but the delighted look on everyone’s face as the last beats blasted showed the crowd’s resilience. With quality soulful house, nothing could get in the way of their good time.” 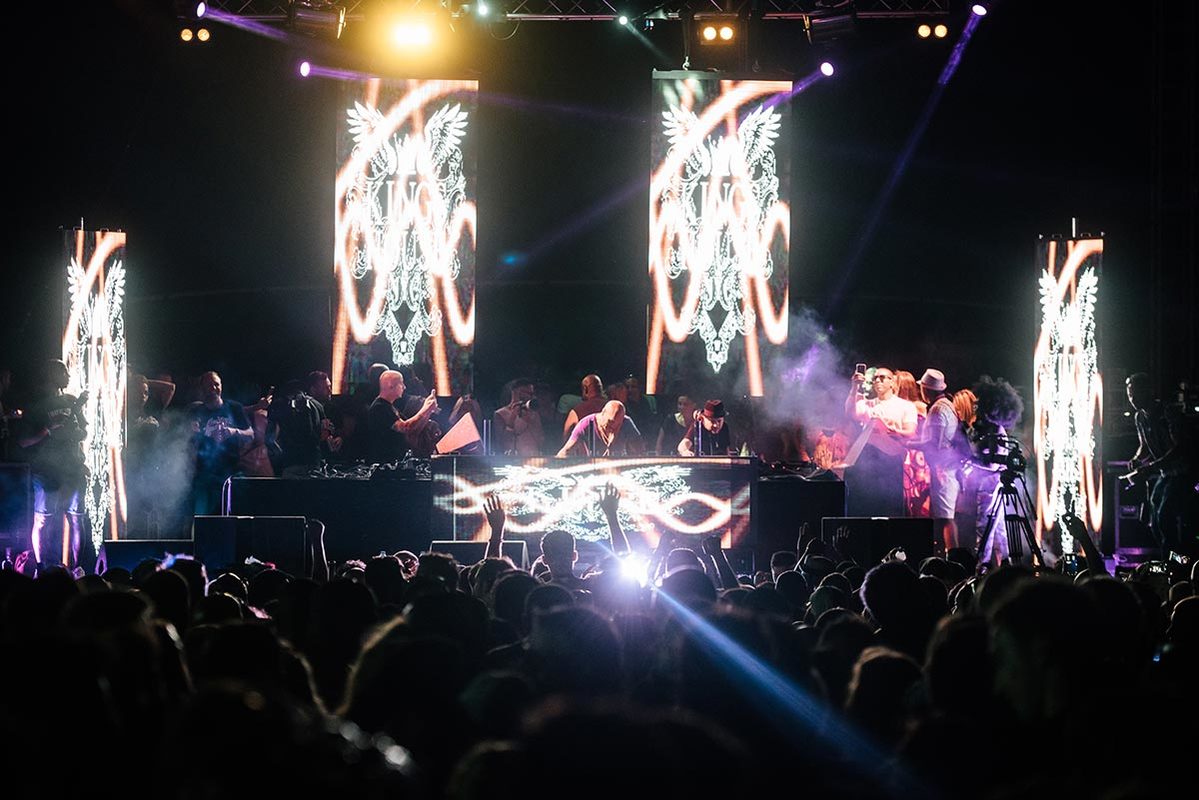