He Said/She Said: 25 Years of Bugged Out! at Printworks London

Bugged Out! took over Printworks London for a 25th anniversary celebration on Saturday, November 16th. Green Velvet, 2ManyDJs, Modeselektor, Mylo, Dusky, Jungle, Justin Robertson and Simian Mobile Disco were among the acts who provided the soundtrack for the party. Mike Barnard and Ann McManus were there. 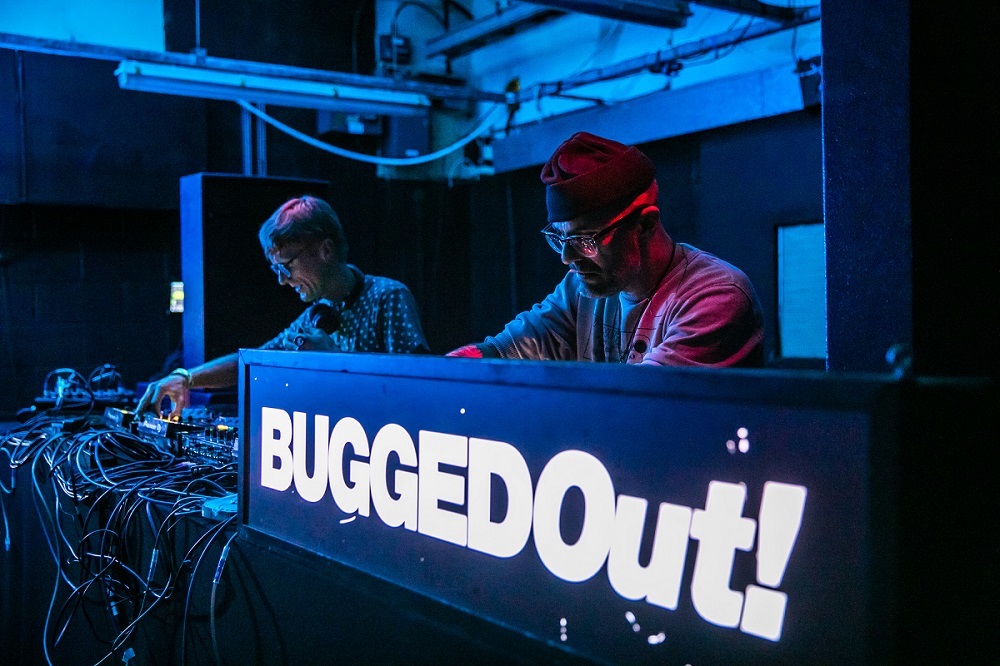 Bugged Out! was fresh as ever with no danger of it stopping its fine work of providing excellent parties.

He Said: “If any nomadic clubnight deserves a party in one of the hottest music venues right now, it’s one that has made a name for itself hosting events at iconic clubs over the years. Bugged Out! has operated up and down the country, hosting some of dance music’s biggest names – often in places that don’t exist anymore. There is a rich legacy of those nights, as well as the short-lived annual weekender at holiday parks in Southport and Bognor Regis. To reflect on such history for their 25th anniversary, the Printworks London takeover saw some of their favourite acts get behind the decks and, while the Press Halls focused on the present, a series of 30 minute sets in the Dark Room was a throwback to raves gone by. 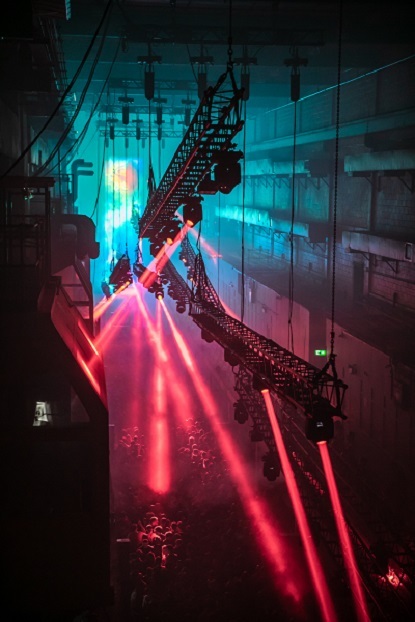 ”We arrived around 3pm with duo Jungle behind the decks, exchanging their soulful live sound for DJing dancefloor bangers. The meaty Gigamesh remix of Radiohead’s ‘Everything In Its Right Place’ acted as a welcome embrace, and a clue that Jungle were no slouches when it came to tune selection. They were on point with KH aka Four Tet’s summer release ‘Only Human’ which became a festival favourite, and then brought the techno-infused disco with Mella Dee’s ‘Techno Disco Tool’, O’Flynn’s ‘Mesablanca’ and Dan Shake’s ‘Daisy’s Dance’. The pair proved they could get a Saturday afternoon crowd moving, and were having a blast behind the decks.

“We stuck our heads into the Dark Room early on, first to get a listen of to 4 To the Floor’s Jay Cardner, then later for Erol Alkan’s Bugged In set. The programming here seemed a little strange to go from the energy of Cardner into an ambient set from Alkan, but the near pitch-black room made for the perfect environment for the latter’s beatless hour. Patient listeners could lose themselves in the soundscape, and there’s perhaps scope for early ambient sets here, however, at 5pm, most were restless – including us. 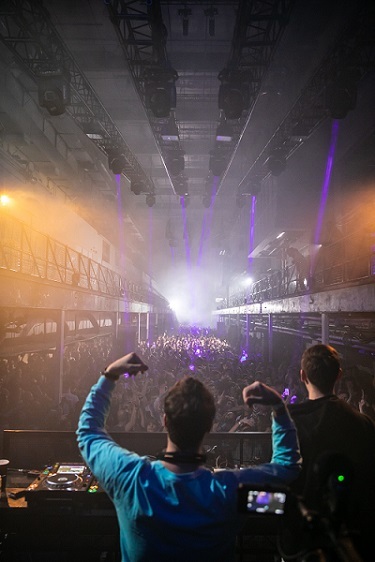 ”We switched back to the Press Halls for Dusky’s set which opened with broken breaks and the Printworks London lighting providing an impressively-choreographed accompaniment before the 4/4/ kicked in.

The pair’s broody music included Brame & Hamo’s ‘Waves Reach’, Def Disko’s ‘Desertia’ and ‘Glyphic’ by Lone; a fine future-looking set ahead of the throwback that followed.

“For us, the best Press Halls set of the day came from 2ManyDJs – the first of their two sets for the day. Known for picking out lost gems and managing to meld the most unlikely tune into a mix, they perhaps played it safe by dropping Technotronic’s ‘Pump Up the Jam’ and Aphex Twin’s ‘Windowlicker’ – both near-guaranteed crowd pleasers – yet they had a big room to fill so it’s easy to forgive them. Elsewhere they flew through some Bugged Out! favourites such as Erol Alkan’s ‘Spectrum’, the Boys Noize remix of Audion’s ‘Mouth to Mouth’ and a version of Felix Da Housecat’s ‘Silver Screen (Shower Scene)’, plus Daphni’s hit ‘Sizzling Hot’. Of course, they were all smart in their suits, looking dapper as they mixed – ever the dance music connoisseurs.

“They’d continue to impress when their attention turned to the packed-out Dark Room where they had just 30 minutes to fill. What followed was a quick-fire round of classics such as Sylvester’s ‘You Make Me Feel’ , Daft Punk’s ‘Burning’, Mr Oizo’s ‘Flat Beat’, Outlander’s ‘The Vamp’ and Green Velvet’s ‘Laser Beams’. Even though it was pretty tricky to move for all the eager ravers in the small space, the atmosphere was electric. 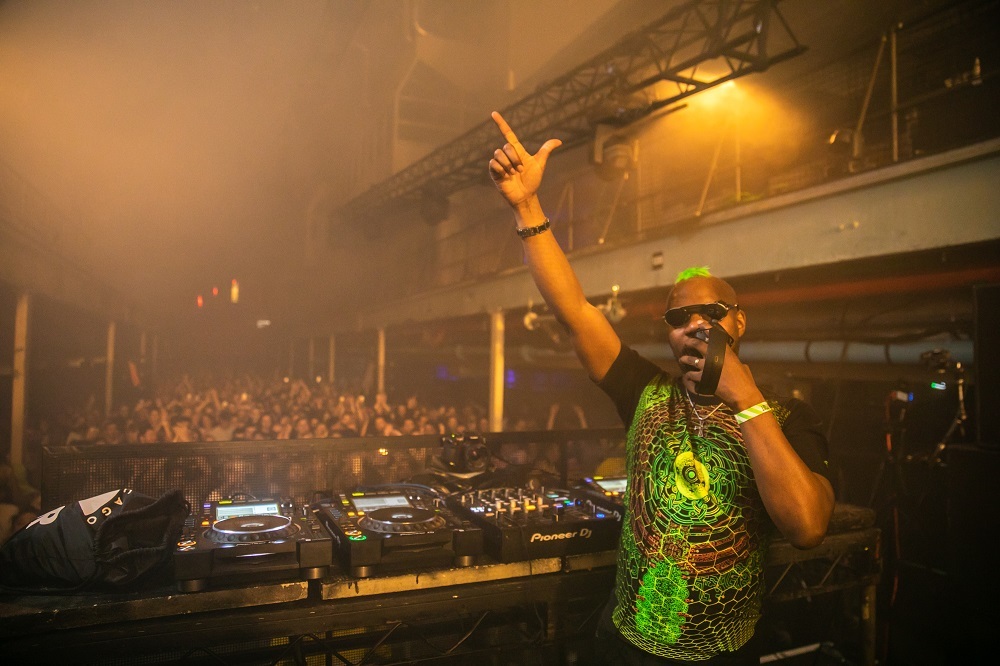 “We continued in the Dark Room for 30-minute sets from the rarely-seen Mylo, Simian Mobile Disco’s Jas Shaw and Justin Robertson. Mylo was all throwback disco with Patrick Cowley’s ‘Do You Wanna Funk?’ and a ‘Big Fun’ remix with no lyrics, making us wish he’d play out more. Shaw dropped the long-forgotten ‘Township Funk’ by DJ Mujava, but that was a highlight to an otherwise roughed up techno set that failed to engage. Robertson slammed in with The Chemical Brothers’ ‘It Doesn’t Matter’, yet we quickly disengaged to check out Modeselektor’s heavy set that included ‘Chained to a Dead Camel’ by Clouds and ‘Fire’ by The Prodigy ahead of Green Velvet’s closing set. 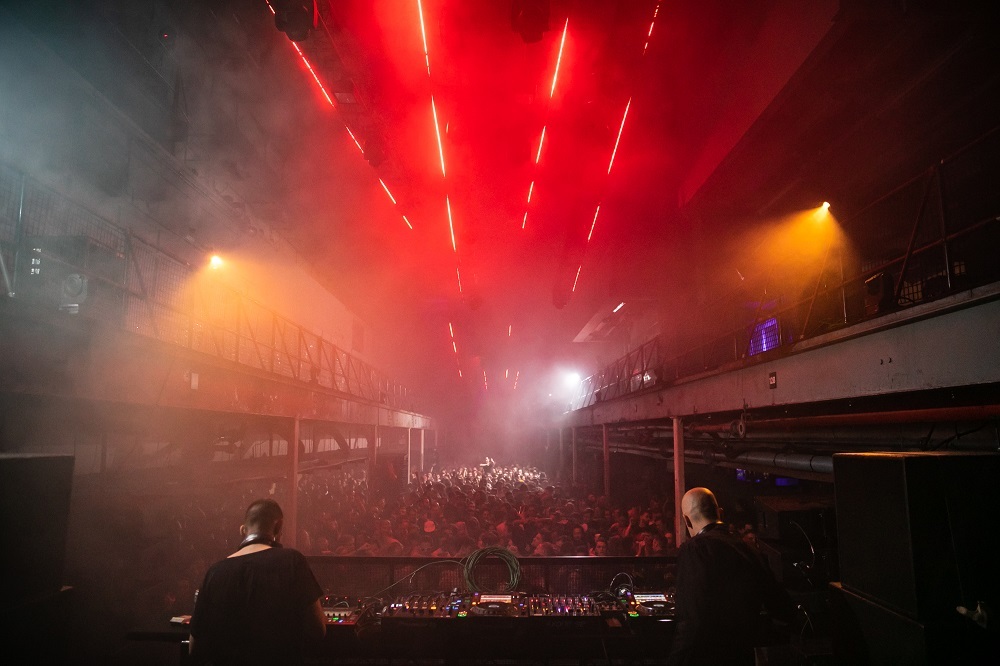 “At 25 years old, Bugged Out! might be edging towards relative pension-age given the changeable state of clubland, but today seemed to be as fresh as ever with no need to stop its work of providing excellent parties.” 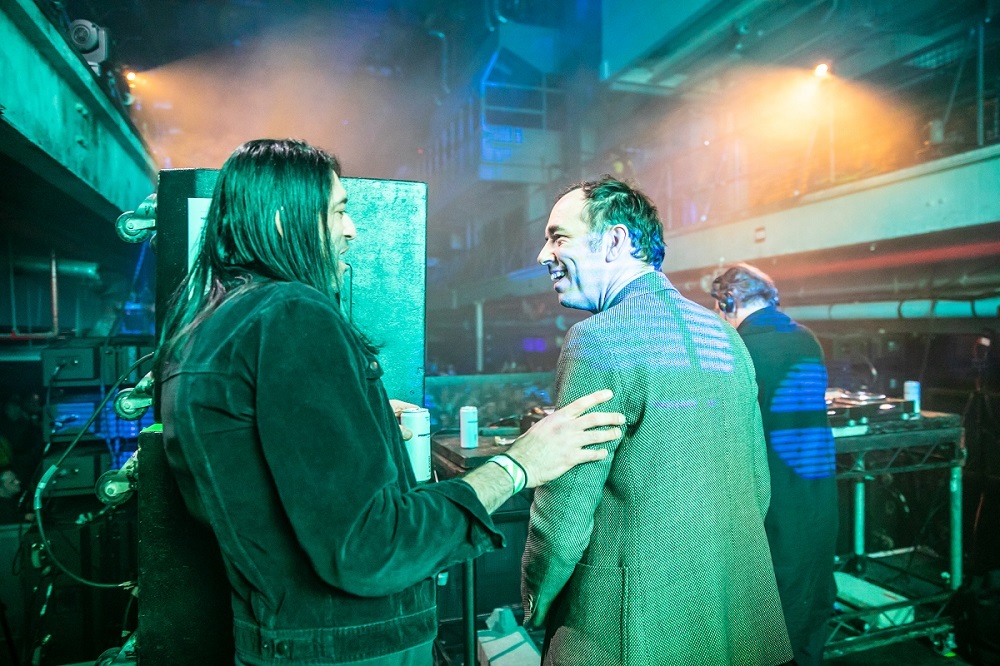 Erol Alkan commanded rapturous fist pumps from the crowd by smashing out Ron Hardy’s ‘Sensation’ as the first track in his explosive set, which switched from electronic banger to banger.

She Said: “Bugged Out’s quarter of a century celebration promised a lot of happy reminiscing, and Jungle’s DJ set got the team in the mood from the start with fun funky disco selection. As if to make sure we paced ourselves, Dusky installed a calming aura with the beautifully-harmonic ‘Cathedral’ by Marcel Es complemented by soft blue beams of light when they took the stage. The crowd embraced the calm and became absorbed in the stillness, before the duo dropped a beat and brought the energy back with some breakbeat featuring tracks like Dawl’s ‘Let’s Go’ with funky visuals like warping faces and radio towers morphing on the screen behind the decks. 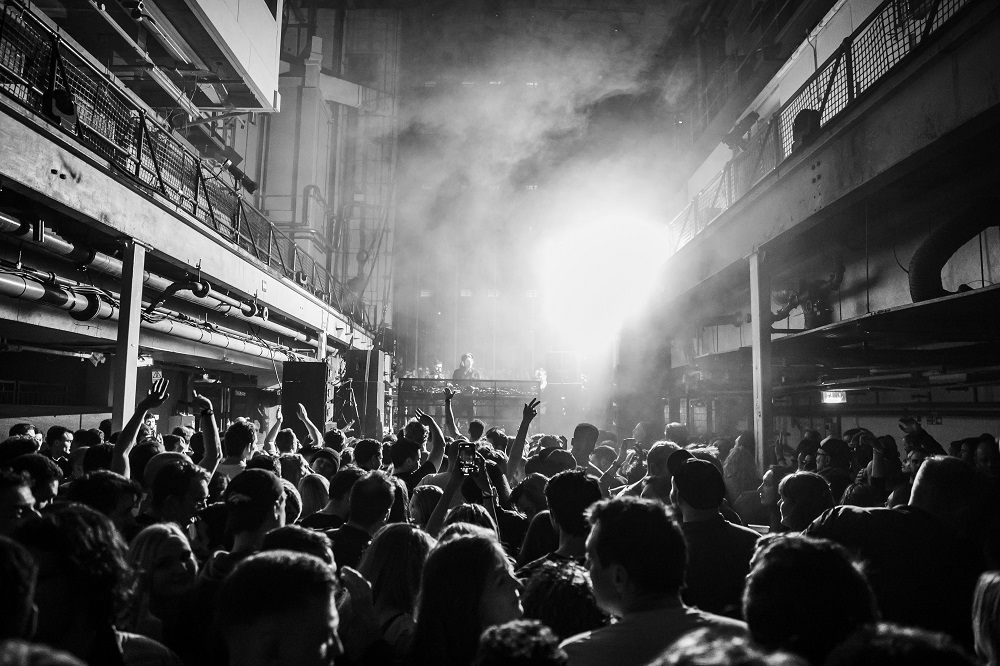 “As one of Bugged Out!’s longest serving collaborators, Erol Alkan featured twice on the line-up, using the double-billing as an opportunity to showcase two very different creative personas. Starting in the Dark Room, obscured from view due for me due to the crowd and the lack of light, Erol Alkan trialled his “Bugged In” concept set which began with a lengthy build-up of drawn-out notes, which sounded a little like a search for a station on an AM/FM radio. Initially we joked it was a musical pallet cleanser, giving the crowd a break between sets. However, it lasted a little while than needed to build the crowd’s intrigue around what would come next, which meant it operated as a bit of a crowd cleanser too. 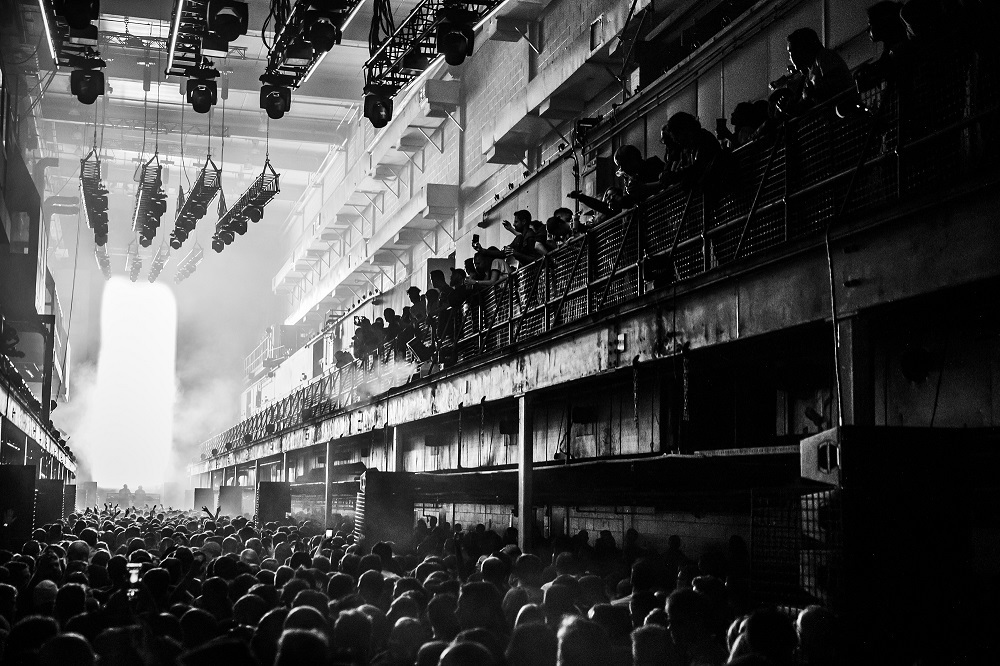 “In stark contrast to the Dark Room set, Erol took to the Press Halls decks with the air of showmanship, striding authoritatively on stage as red and purple strobes swept down the silenced hall. He commanded rapturous fist pumps from the crowd by smashing out Ron Hardy’s ‘Sensation’ as the first track in his explosive set, which switched from electronic banger to banger. 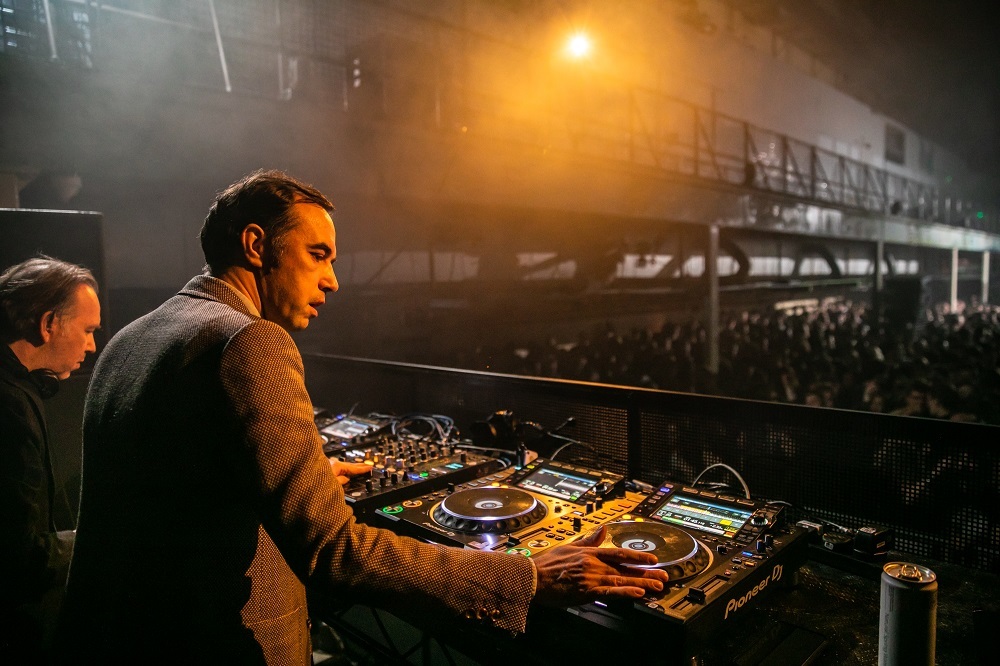 “For us, the star set came from 2manyDJs, another of the day’s double bills, who rocked up to work the Press Hall decks in formalwear, with one of the brothers wearing a light brown suit and tie, while the other wore a smart long navy coat and fittingly opened with the Soulwax remix of Marie Davidson’s ‘Work It’. You couldn’t help but smile watching them tap their, bop and swirl around the decks in a eloquent manner, warmly engaging with the support team. Their 30 minute DJ set in the Dark Room shortly after took on an even faster pace. 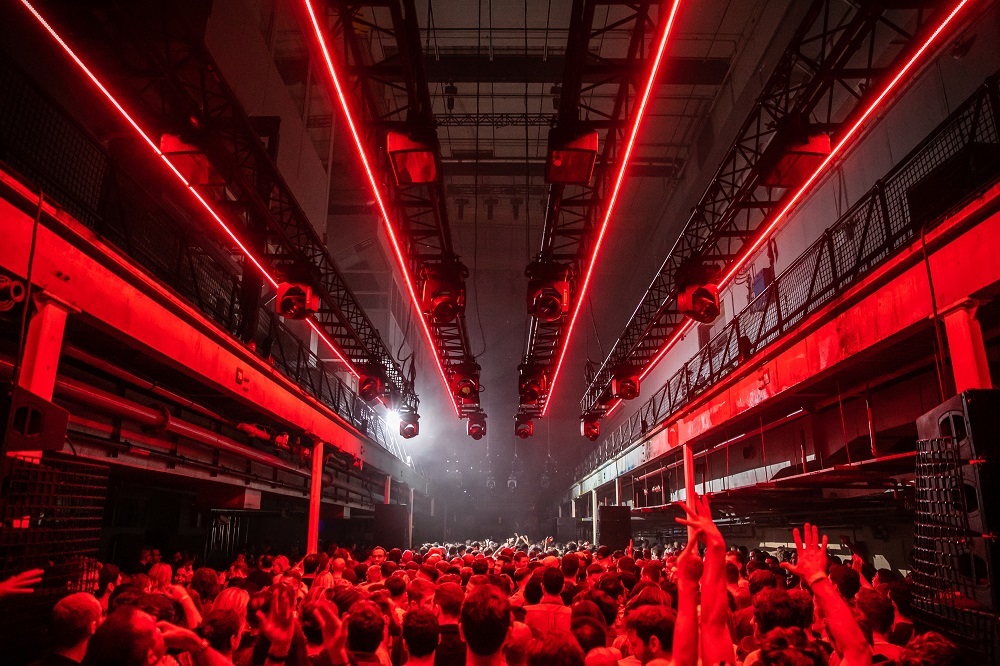 “The Dark Room reached peak capacity as Mylo opened with A Guy Called Gerald’s ‘Voodoo Ray’, a track you can’t help but smile to…even if your left arm is edged up against a brick wall, dripping with condensation from overheating humans and you are trying hard not to move your lower half too much, conscious of the fact either the person in front of you or behind you might take your attempts to dance as an attempt to grind them. 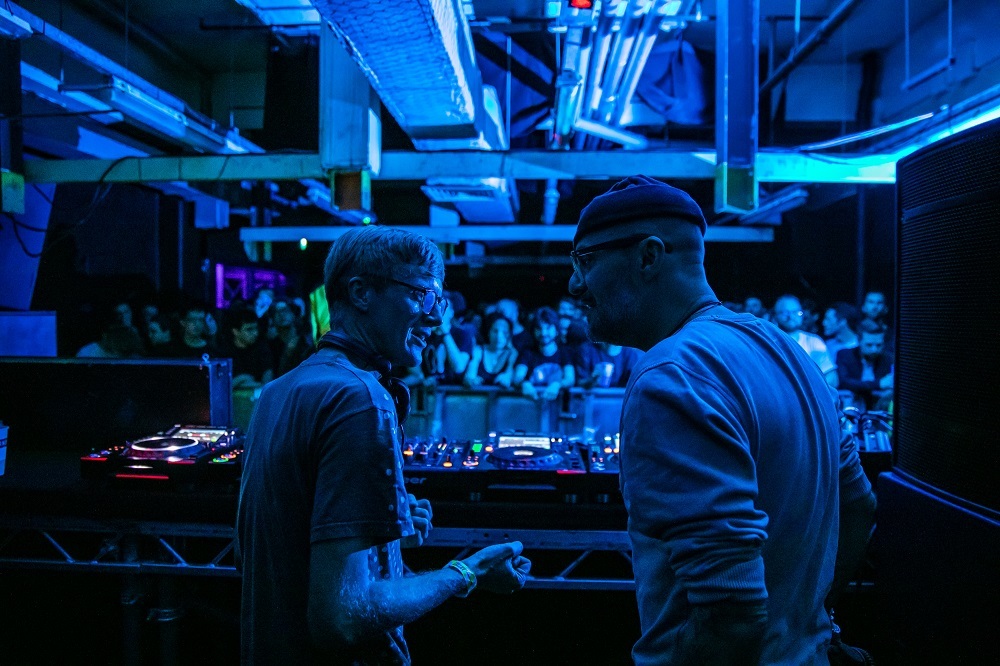 “The 30 minute set format evidently worked well as the DJs moved fast through their selections, allowing the crowd to devour tracks in quick succession without losing interest, like DJ-Blinkist. I wonder if, in a world of the shorter attention span, this format will become more common place.” 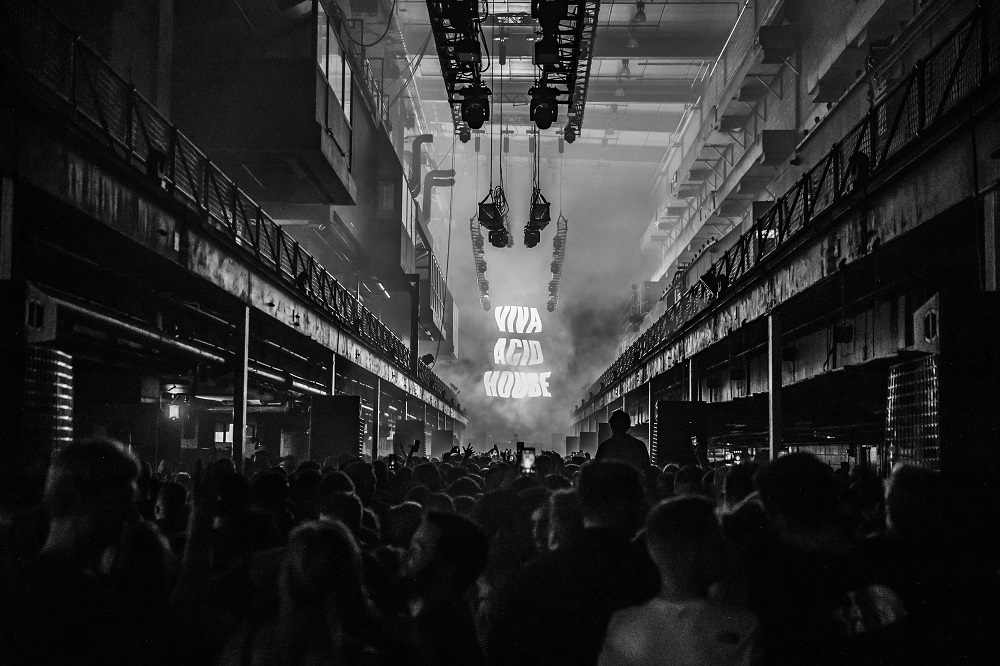