!(feature_c)http://relayer.s3.amazonaws.com/articles/spreads/52408ead037f38000200023f.jpg!FOUND Street Party revelers were promised an education in house and techno when Kevin Saunderson and Frankie Knuckles played in the heart of London’s financial district, and they left following an uplifting lesson from the pair. It was the second time FOUND had closed off a street near Liverpool Street station for a day of dance music: late summer warmth, a crisp soundsystem and an enthusiastic crowd ensured the party helped many deal with their post-festival-season hangover.

The Menendez Brothers kicked off the event soon after 1pm, when we arrived Voyeur had taken over behind the decks, shifting through house grooves to lay a foundation for Kevin Saunderson to build from. The large bar was ensuring everyone was suitably watered and Mama’s Jerk Station were providing the food, the only frustration throughout the day were the usual London festival toilet queues despite the large number shipped in to Wilson Street. At the opposite end of the street was the modest stage with a beefy Funktion One soundsystem powering the dancefloor, creating a tunnel of sound between the high-rise office buildings.

Saunderson pulled out a few 1990s house classics before progressing into the Detroit techno realm.

When Saunderson took over from Voyeur, he looked keen to make an impression and a wry smile was ever-present on his face. He pulled out a few 1990s house classics during the opening half hour before progressing into the Detroit techno realm he is most known for, but with Frankie Knuckles to follow he reverted to house for the final tunes including a remix of his most famous tune “Good Life” under his Inner City alias. There was a friendly handover between Saunderson and Frankie Knuckles as the later made his way on stage to take over for the final two-and-a-half hours, a set that Knuckles used to cover a diverse range of house styles.

Vocals, strings and the odd piano melody had the crowd in carnival spirits, with arms in the air and many getting on shoulders wearing suitably smug grins. While the vocal-led tunes such as Shapeshifters “Back to Basics” and his own remix of Donna Summer’s “Hot Stuff” (made with Eric Kupper) had plenty singing along, when the darkness came and the street lamps lit up he opted for more driving beats. The Street Party faithful was full of appreciation when Knuckles regrettably brought an end to the day at 8pm, however more was to come for FOUND fans. 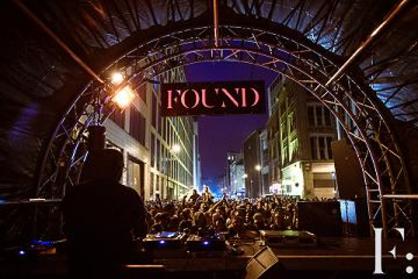 The transition from day into night was met by FOUND’s warehouse after party at Factory 7 just round the corner in Hearn Street. The switch from outside to the dark realms of a club similarly brought a shift in the music from uplifting vibes to more moody, atmospheric house. The converted car park space was throbbing with a lively dancefloor and a talkative smoking area encouraged by a surprisingly mild night. Apollonia’s Dyed Soundorom took up headline set duties to a packed dancefloor while support came from South London Ordnance, The Mekanism, Sion, Cropper b2b Schumen and Rollo keeping the party rolling until 6am.