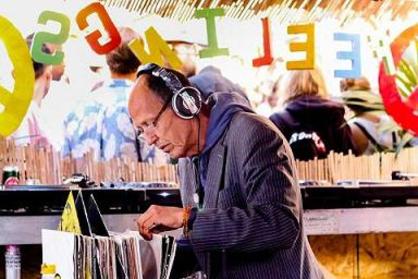 Balearic Ibiza vibes were re-created in Hackney Wick when veteran spinner and White Isle original DJ Alfredo made his first London appearance in two years on Saturday, August 16th at Feelings. We got down to the daytime party at Shapes warehouse to hear what Ibiza used to sound like.

With August weather proving changeable at best, it was with a sigh of relief that the sun shone down on Hackney on Saturday. We arrived at Shapes wearing sunglasses and eager to see how the al fresco setting would adopt an Ibiza terrace style. The space was long but narrow, handily facing west so catching the sun from the late afternoon into the evening. We noted the table football by the entrance, passed two BBQ food outlets on our left as we stepped up onto wooden decking. A bar serving cocktails in whole coconut shells was on our right, and straight ahead was the dancefloor with benches lining it and picnic benches further back to chill out on. The DJs had a wooden hut to play from, the walls on either side meant the music was channeled down the space. A floral theme to the decoration provided a summer of love flavour and with the sun beaming down on us, coconut cocktails and Yeah! burger in hand, the scene was nicely set.

Given that this was Alfredo’s first set in two years in London, many will have wondered why he hasn’t been booked sooner.

While the Feelings residents and guests got the afternoon warmed up nicely with a chilled vibe that suited the suntrap of a dancefloor, it was DJ Alfredo’s appearance behind the decks that lured the majority up close to the DJ booth. The Ibiza guru was all business behind the decks, focused on keep the sounds balearic in his own unique way by mixing house and disco beats with the odd reggae track or something a little more old skool such as Grandmaster Flash or even The Cure. Yet at no point was it cheesy, Alfredo not only knows a great tune when he hears one, he also keeps it classily mixed. Smiles were on every face in the crowd when he finished with the Pink Panther theme tune as the sun began to fade. Given that this was Alfredo’s first set in two years in London, many will have wondered why he hasn’t been booked sooner.

Although darkness was settling in outside, there was still time to party inside the Shapes warehouse where Kasra V, Dan Shake and the Menendez Brothers were set to take Feelings through until midnight. The style shifted from balearic to Detroit techno with Dan Shake’s set, helping revellers break out a sweat while others continued to take the night easy by relaxing outside. Feelings really did capture the essence of Ibiza, the new London party has a bright future.