!(feature_c)http://relayer.s3.amazonaws.com/articles/spreads/52016facba50690002000364.jpg!House and techno has been the at the heart of club brand Eastern Electrics from its first warehouse parties in 2008 to a debut weekend camping festival at Knebworth over the weekend (August 2nd – 4th). It has been putting on collaborative nights and extending its reach slowly, building up to an event spread over three days and two nights with more than 140 acts. We were on-site Friday and Sunday to see what the evolution of the their labours produced.

Friday
Glorious sunshine welcomed us to Knebworth Park at around 2pm. As we walked towards the entrance, the campsite was viewable just the other side of the fence and was already getting busy as eager ravers had been arriving since 10am. Once we had our wristbands, we scouted out the arena which was larger than last year’s day event in Greenwich meaning the stages could be spread out to avoid sound clashes. The two most inventive stages were the Switchyard, an open-air stage enclosed by ship containers with raised platforms, at the top of the sloped site and the Igloo near the foot of the hill with its 360 degree projections. Alas there was no sign of an outdoor arena for the Eastern Electrics stage during the day as indicated prior to the event, so the main stage acts all played in a tent, but that was the venue almost always packed – even for the first DJ on stage – Huxley. his 2pm start time perhaps didn’t come soon enough for the most excited festival-goers who were bouncing along to the beats and setting the scene for the next three days. Looking around, the dress code memo seemed to be denim hot pants for the girls while the boys opted for a strange look: shorts and low-rise trainers with white socks pulled up to the fullest.

We took in the rest of the site, catching Ralph Lawson turning the Switchyard on for Barcelona clubnight Elrow, had a look in the Electric City with its boudoir of dress up, then nestled ourselves in among the wooded area for some shade where we could see the festival gain momentum as day trippers and campers started to mingle in the arena and we could hear Bicep and Deetron ensuring they arrived with main stage gaining momentum. We stepped out into the sun to check out Theo Parrish in the Substation where Black Atlantic were hosting. His skills on the mixer were godlike, filtering both channels to maximum effect while jacking his body as much as the front row of the crowd. Clearly loving every tune himself, the infectious grin on Parrish’s face was felt by all.

The dress code memo seemed to be denim hot pants for the girls while the boys opted for shorts and low-rise trainers with white socks pulled up to the fullest.

Ducking out of Parrish for a look at ENTER resident Paco Osuna’s set for Elrow proved to be an inspired decision. There I was greeted by a carnival atmosphere with stilt walkers, inflatables and live saxophone player in the middle of the arena helping provide a sensory overload. When the confetti blasted into the air it was almost too much for some with cheers of approval and a few more blow up whales thrown around for good measure. By now the festival was hitting its stride with Maya Jane Coles filling the Eastern Electrics main stage with her house blends as darkness settled over Knebworth Park.

A half-hour pause on the main stage was required to pack away the decks for the premiere of the new live show from Moderat following the release of second album II that day. Modeselektor’s Gernot Bronsert and Sebastian Szary along with Apparat’s Sascha Ring make up Moderat, and all three got behind the equipment to deliver the standout set of the evening. Featuring live guitars and vocals, their new material was warmly received but it was classic such as “Rusty Nails”, “A New Error” and “Seamonkey” that brought the biggest cheers – perhaps over the next few months their tour will develop a fondness for the fresh material too. The live visuals created a 3D effect with uplighting creating a unique experience thanks to Pfanderei will certainly help.

Theo Parrish’s skills on the mixer were godlike, filtering both channels to maximum effect while jacking his body as much as the front row of the crowd.

After Moderat, our time on site was limited owing to outside commitments, but there was still time to get back to the Black Atlantic stage for a near-spiritual set from Dixon which blended uplifting house with some raw beats. He was followed by a musical education from Levon Vincent who managed to seamlessly skip from techno to disco to glitchy synths and back again. We were sad to have to make a move before acts such as Dave Clarke, Claude VonStroke, Seth Troxler and Blawan got behind the decks, however we could see the party was in good hands. A little rain had done nothing to put off the ravers – they had only just got started. 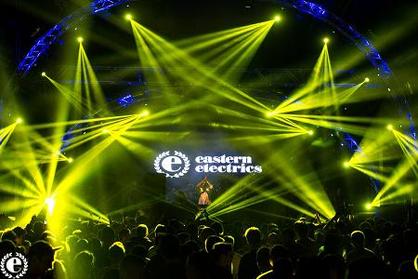 Sunday
We did indeed make it back to site on Sunday at 5.30pm, and headed straight to the Switchyard to see Chicago DJ Chez Damier laying down the house grooves. Despite the loss of the searing sun, there were smiles and sunglasses across the site. Today there were reduced music hours of 2pm to 10pm and the site was a lot less busy – to be expected on the third day of a dance festival – but speaking to those who had been camping all weekend, the weary souls who had gone home or stayed in the campsite had been treated to highlights such as the Luke Slater’s Planetary Assault Systems and Surgeon in the Igloo in the early hours. For those keen to see the climax of the event like us, Damier was a fine place to start having helped shape the Detroit scene with Derrick May in the 1980s, having a ball behind the decks.

The Eastern Electrics stage was the busiest with MK’s deep bass throbbing through an expectant crowd. Berlin’s Panorama Bar resident Prosumer was getting the Igloo back into gear while Kerri Chandler and Kompakt label boss Michael Meyer were taking control of the main stage and Switchyard respectively. Skream had perhaps one of the most surprising sets of the weekend, taking up a disco slot at the Star of Eastern Electrics pub tent to finish off the stage, and it proved so popular that eager ravers spilled out of the entrance. He had been boasting on Twitter how he’d been leafing through the tunes to play, and the EE populus responded by crowding into the venue – perhaps unexpectedly.

Masters at Work took the controls for the final two hours with jazzy, soulful house bellowing out and the iconic artwork from the pair’s past releases on screen.

We could spy the mass of people from the main stage, yet never ventured over such was the strength of New Yorkers “Little Louie” Vega and Kenny “Dope” Gonzalez, aka Masters at Work. They took the controls for the final two hours with jazzy, soulful house bellowing out and the iconic artwork from the pair’s past releases on screen. It may be more than 10 years since the release of Our Time is Coming, but it felt like their time was now as they managed to gleam every last drop of energy from the EE faithful to see them through to 10pm. Their thanks to all was heartfelt; with a final blast of synths they were gone and the festival was over.

The Eastern Electrics team did a cracking job for their first camping festival with an impressive mix of house and techno acts, varied stages and about the right level of bars, eateries and stalls. The sound was decent during the day, the lighting throughout looked good, but there were reports of issues with the sound quality at night with sweetspots in tents having to be found, however these are issues that can be ironed out for future years. Another outside stage during the day would also be welcome – especially if we have another heatwave summer. All in all though, this is another solid platform for Eastern Electrics to build on for their next level of festival in 2014.