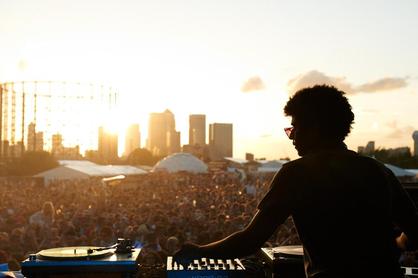 Eastern Electrics made the leap from night time warehouse parties to a daytime festival with a hugely successful debut at Area 12 in Greenwich. Picking the mid-Olympics weekend proved to be a bonus too: London was abuzz with events all over the capital as well as Jessica Ennis and Mo Farah set to compete in what would be dubbed Team GB’s Super Saturday. With so much goodwill, all the Eastern Electrics crowd needed was a soundtrack to their day, and they were well served with Jamie Jones, Julio Bashmore, Nina Kraviz, Damian Lazarus, MK, Crazy P and Azari & III on stage throughout the day.

!(feature_l)http://relayer.s3.amazonaws.com/articles/spreads/502975dd5edab700020001a3.jpg!Eastern Electrics was forced to relocate their festival from Clapham Common to the new Area 12 space next to the Millennium Dome which made a boat along the Thames an attractive travel option and an iconic backdrop to the event. Looking back across the site from the main stage Canary Wharf’s towerblocks loomed large on the horizon while the Dome made for an iconic landmark just next door. On arrival the sun was shining and Richy Ahmed was getting the main stage moving to house grooves. It was apparent that the arrival of good weather had signalled party time for many of the festival-goers as the space was well-filled by 2pm. Rain interrupted settling anywhere initiall so the first act we fully appreciated was Tensnake in the krankbrother mini dome which was packed to hear house favourite “Coma Cat”.

The krankbrother mini dome which was packed to hear house favourite “Coma Cat”.

!(feature_r)http://relayer.s3.amazonaws.com/articles/spreads/502975ef5edab700020001a4.jpg!Of course Tensnake wasn’t going to play his signature tune until the end and once the crowd’s cries of “turn it up” were answered, they were happy to get down to his disco-infused selections. The hot and sweaty dome was like a club at 1am by the time “Coma Cat” dropped to wild cheers with the Round Table Knights remix the choice on this occasion. Slithering out of the krankbrother stage it was time to get some sun on the main stage where Maceo Plex was putting smiles on a now sizable crowd. We took a quick break to head to the packed Black Atlantic marquee where deep house maestro Kerri Chandler was so in-demand that revellers were dancing outside rather than trying to find a space amongst the main throng. Though Chandler was on form, the sunshine proved too alluring and we soon found ourselves lapping up the end of Maceo Plex’s set, though he got a little to cheesy with some of the vocal house selection, followed by Crosstown Rebel boss Damian Lazarus who indulged in some tidy basslines for a more underground feel.

!(feature_l)http://relayer.s3.amazonaws.com/articles/spreads/5029760c5edab700020001a5.jpg!We headed back to krankbrother not long into Lazarus’ set to see Nina Kraviz get the booty shake going in the now-throbbing dome. Her tech-house was packing a serious punch for the late afternoon, though the volume was a little lacking to really do her justice. However, worse was to come on the main stage where the hyped-up live act Azari & III failed to really ignite, resulting in a flat set that never captured the spirit of their hits, in particular “Hungry for the Power” which has proved to be their calling card. Far better was the experienced deck master Andrew Weatherall who was giving a lesson in acid house in the 2020vision marquee while the 2020Soundsystem who followed were a tight and rousing band showing up Azari & III’s lukewarm performance.

!(feature_r)http://relayer.s3.amazonaws.com/articles/spreads/5029764c5edab700020001a6.jpg!Although Eastern Electrics Festival was a dance event, that had not stopped the canny organisers from errecting a huge screen to show the Olympic action (albeit muted). This was the place-to-be for sports fans in the crowd at 8.30pm when Jessica Ennis powered home in first place in the final round of her heptahlon, the 800m, to roars of approval from those looking on. Mild euphoria followed when Greg Rutherford and Mo Farah added to the four golds already won that day and it made Jamie Jones’ closing set on the main stage all the sweeter. Mr Oizo’s “Flat Beat” and a stage full of the Eastern Electrics family saw out the event and it was a case of job well done, see you next year.

With all the negativity that has hit the London dance music festival scene in the wake of the Bloc disaster, Eastern Electrics showed you don’t have to aim to be the biggest and the best if you do what you plan well. There were issues with queues for the toilets and bars, as well as a few sound troubles, but everything ran smoothly and the area well laid out. Sadly one of the stages was dropped on the day, however a free party is planned for those ticketholders who were particularly keen to see those artists which goes to show the people at the top care. Eastern Electrics Festival is established now, and should be able to take on board the areas to improve to be better next year. They certainly got the music spot on.