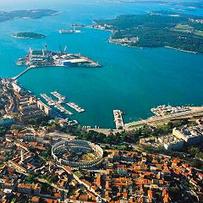 In just one month the abandoned fort in Pula will be alive to the sounds of underground dance music as the respected Croatian festival Dimensions kicks off. In the first of two previews looking ahead to the festival running from Wednesday, August 27th to Sunday, August 31st we look ahead to the opening concert, daytime beach parties and night time fort activities.

Dimensions Festival was launched in 2012 as a sister event the established Outlook Festival, providing a showcase for electronic music across house, techno, bass, disco and more. The main festival action takes place at Fort Punta Christo through the night from Thursday to Sunday, helped along by beach parties during the days and an opening concert on the Wednesday night. Accommodation ranges from on-site in the midst of the action ranging from standard and boutique camping, hostels and camper vans to off-site in private apartments, the Bi Village holiday resort in Fažana or local hostels with 24-hour transport links.

A Roman Amphitheatre in Pula will act as the venue for the opening concert.

Check out our review of Dimensions Festival 2013, and get a feel for what’s on offer in 2013 below as we break down the on-shore activities day-by-day.

!(feature_l)http://relayer.s3.amazonaws.com/articles/spreads/53d7eaf191feb8000200028c.jpg! Opening concert
A Roman Amphitheatre in Pula will act as the venue for the opening concert for the second year. Sold as a separate ticket from the beach and boat parties, revellers will be treated to live sets from Dan Snaith’s Caribou project ahead of the release of new album Our Love as well as DARKSIDE, the collaboration between electronic musician Nicolas Jaar and Brooklyn multi-instrumentalist Dave Harrington, who are riding high off of their debut Psychic last October. Both promise to be displays to get Dimensions off to a classy, dramatic start helped by supporting sets from Berlin-based Nils Frahm who has extended his solo piano play to include a Juno synthesiser, Rhodes and tape delay for a blend of acoustic and electronic plus Kwabs who marries gospel with electronica to be described as the new Seal. 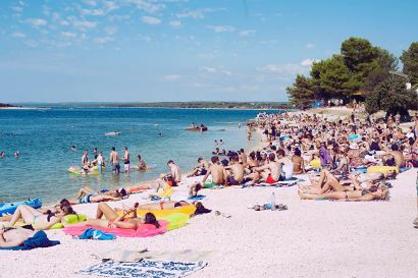 Beach by day
Kick off Thursday on the beach next to the campsites where Kwabs will pick up where he left off on the Wednesday night with a set during the day joined by Cape Town’s John Wizards who had rave reviews for his self-titled first album on Planet Mu. Awesome Tapes from Africa, a blog started by Brian Shimkovitz to showcase music in Africa rarely heard outside the region, will provide an insight into music you’ve likely never heard before and there will be more acts announced too.

Just outside the fort Berghain’s label Ostgut Ton will be bringing their top dogs to The Void arena.

Fort arenas by night
By night, the first stage you’ll come to is The Clearing, an area that sits between the beach and the fort. It’s a large outside space in the middle of a forest that will have some of the biggest names at the festival curated by Resident Advisor. On the first night it will host Los Angeles indie rock band Warpaint, American funk, soul, and jazz composer Roy Ayers, global music aficionado Gilles Peterson, Ghanaian highlife style (music characterised by jazzy horns and multiple guitars) original Ebo Taylor and chillwave act Baths.

Just outside the fort Berghain’s label Ostgut Ton will be bringing their top dogs to The Void arena where there is a maximum capacity of 1,000 people and always proves to be popular. Be sure to arrive early to see your favourite of the Berlin house and techno quartet of Ben Klock, Marcel Dettmann, Tama Sumo and label boss Nick Höppner. The London-based Hyperdub take over Fort Arena 1 surrounded by 20 foot walls. Head honcho Kode 9 will be joined by live sets from Laurel Halo and Jessy Lanza supported by DJ sets from Cooly G and Scratcha DVA for dubstep, 2-step, grime and UK funky.

Mala, one of the founding members of dubstep originators Digital Mystikz, gets control of Mungo’s Arena home to the epic Mungos Hifi Soundsystem within the fort. Bass throbs will come from Tikiman live and Scion performing tracks by Rhythm & Sound, Exodus, Mala and Mungo’s Hi-Fi joined by a special guest to be announced. The iconic Moat surrounding the fort makes for the most dramatic of arenas as revellers stand in a narrow trench of sound booming down it. Kompakt-affiliated Dial label boss Lawrence headlines joined by artist, producer, selector and curator of Soul People Music plus sister labels Earth Tones/BoardsFred P, France’s hot tip Jeremy ‘Underground Paris’, the eclectic Damiano von Erckert and the jacking Marquis Hawkes. 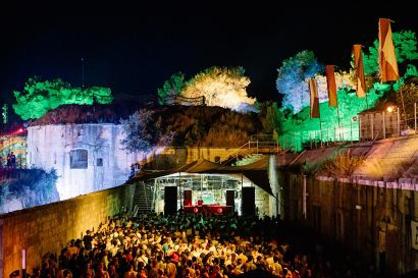 Beach by day
Get a jazz infusion with Manchester-based trumpeter, composer, arranger and band-leader Matthew Halsall with his trio or fellow jazz Mancunians Gogo Penguin. Rosie Lowe will provide sultry lyrical delivery over blissful vibes, there will be fascinating beats from Kutmah and more on the beach on Friday.

Fort arenas by night
There’s some major action in The Clearing to keep tabs on with electronica man-of-the-moment Jon Hopkins headlining with his brand of uplifting melodies and brutal beats. Disco dons Metro Area get a live set as does Mala. Support comes from Can U Dance plus Fatima & The Eglo Live Band.

Oscillate Wildly, who put regular parties on at Corsica Studios London and Hope Works Sheffield, have assembled a typically forward-thinking line-up for Fort Arena 1 with singer-songwriter Kelela famed for her strong vocals and Detroit techno favourite Anthony ‘Shake’ Shakir plus beat mechanics Vatican Shadow and Cut Hands. Electric Minds get The Void to programme with dance selector supreme Theo Parrish joined by the deep and funky from Move D, Velvit and Dolan Bergin.

Design agency Kontrapunkt wouldn’t allow themselves to be seen as anything but on trend, and they’ll be giving Mungo’s Arena a night of tastemakers such as hip hop from fLako and Onra, the founder of Must Have Records, Jay Simon, spanning the boundaries of disco, soul and funk, Opolopo – Yourban for ‘plenty’ – adding broken beat and house into the mix, the homegrown talent of Zagreb’s Eddy Ramich and Kutmah following up his appearance on the beach.

Esteemed labels Hessle Audio of London and L.I.E.S. from Brooklyn, New York will get The Moat going with the star acts from each behind the decks. Representing Hessle is Ben UFO, Pearson Sound and Pangaea; L.I.E.S. bring Ron Morelli, Svengalisghost and Greg Beato. Expect to be impressed. 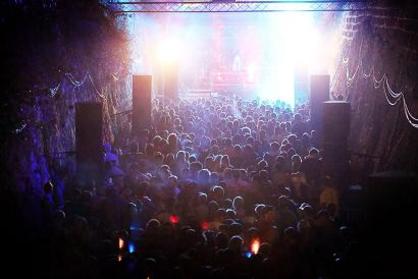 Beach by day
English indie rock band Glass Animals only released their debut album Zaba in June 2014, but they are set to play the beach on the Saturday. They will be joined by singer and percussionist Mo Kolours, hip-hop producers turned house and techno DJ Mr Beatnick, Rinse FM’s Josey Rebelle and one of the original architects of the Boiler Room, Thris Tian.

The bassbins will be vibrating long after the final tune in Mungo’s Arena thanks to Exit Records.

Fort arenas by night
The Clearing gets serious on Saturday night when Theo Parrish plays his second set of Dimensions – this time live. He’s supported by Three Chairs cohort Moodymann, Caribou’s house/disco alter ego Daphni plus soul singers Omar and Andrew Ashong. The bassbins will still be vibrating long after the final tune in Mungo’s Arena the same night thanks to Exit Records with dBridge, Calibre, Alix Perez, Skeptical, Stray and Heart Drive joined by MC’s SP:MC and DRS. 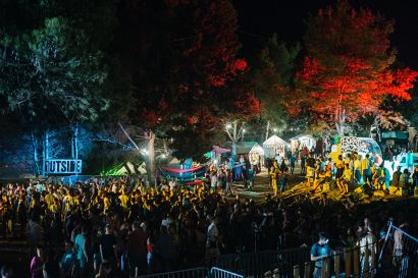 Beach by day
The final day at the beach see The Internet, Prime Numbers label owner Trus’Me, a second set of the weekend from fLako and Tall Black Guy provide the tunes with more to be confirmed.

Bleep get The Moat for another techno showdown which will see a live show from Blawan and Pariah’s Karenn project.

Fort arenas by night
Techno lovers are in for a treat in The Clearing on Sunday night. Model 500’s Juan Atkins and Moritz Von Oswald team up to present their Borderland project while Underground Resistance go way back to perform their Timeline LP live. Minimal maestro Robert Hood, electro originals Aux 88 and, representing the new wave, Nina Kraviz ensure this is a stage few will be able to pass without a dance on the way to or from the fort.

There is plenty more to see, however, as London clubnight series The Hydra have got Karizma, Kaytranada, Axel Boman, John Roberts (live) and Josey Rebelle in Fort Arena 1 while Eglo Recrods are in The Void with Floating Points, Motor City Drum Ensemble, Alexander Nut, Fatima (PA) and Underground Paris. Drum and bass legend Goldie bring his Metalheadz to Mungo’s Arena for a final night rinse out joined by Lenzman, Om Unit, Jubei, Ulterior Motive, Ant TC1 and MC’s SP:MC and DRS.

Bleep get The Moat for another techno showdown which will see a live show from Blawan and Pariah’s Karenn project plus Ø [Phase], Peter Dundov, DJ Richards and Bleep DJs.

!(feature_l)http://relayer.s3.amazonaws.com/articles/spreads/53d7eef291feb800020002b2.jpg!Tickets for Dimensions Festival are still available priced from £140 for a full weekend as well as day tickets on the gate. Accommodation (including camping), the opening concert and boat parties must be paid for separately. For more information and to book, go to www.dimensionsfestival.com.

Check back next week for a full preview of the boat parties.