The inaugural edition of Afropunk London celebrating the creativity and freedom of spirit in alternative black culture was held at Alexandra Palace on Saturday, September 24th with thousands of members of the UK Afropunk army watching Grace Jones, Young Fathers, Laura Mvula and Kwabs and more perform. Three stages hosted talent from the worlds of punk, dub, hip-hop and beyond, plus the SpinThrift market place with stalls from independent designers, artists, magazines and more. Samantha Kemmy was there.

Inspiring, innovative and striking, Afropunk is a very welcome addition to the London festival scene. 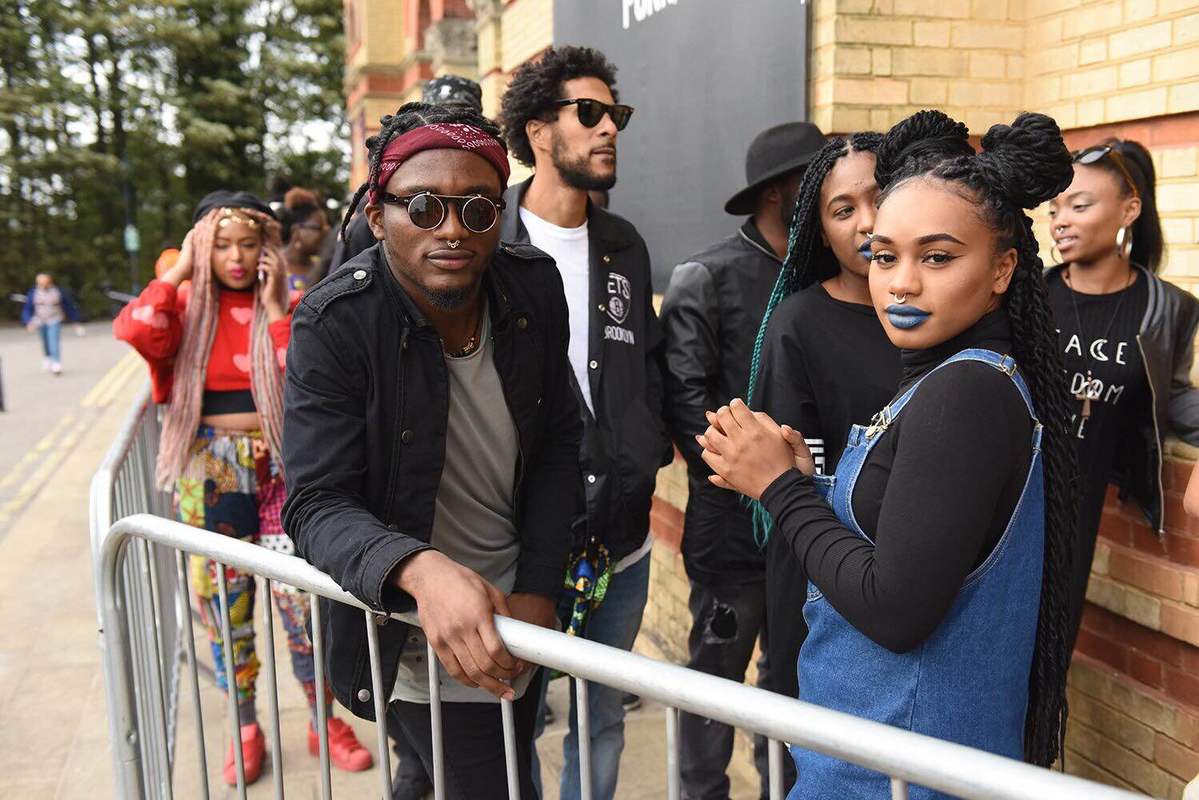 Breaking ground at Alexandra Palace last weekend, Afropunk leads the way for more substance on the dancefloor. The palm court has turned catwalk, awash with millinery that would make Isabella Blow (RIP) shoot a double take. You can’t move for photographers eager to capture the stylish and original crowd. DM’s are paired artfully with African wax print textiles, body paint, bespoke jewellery and sculptural silhouettes. It’s the hyper-global assemblage of youth style that Afropunk has become synonymous for and its finally in London. 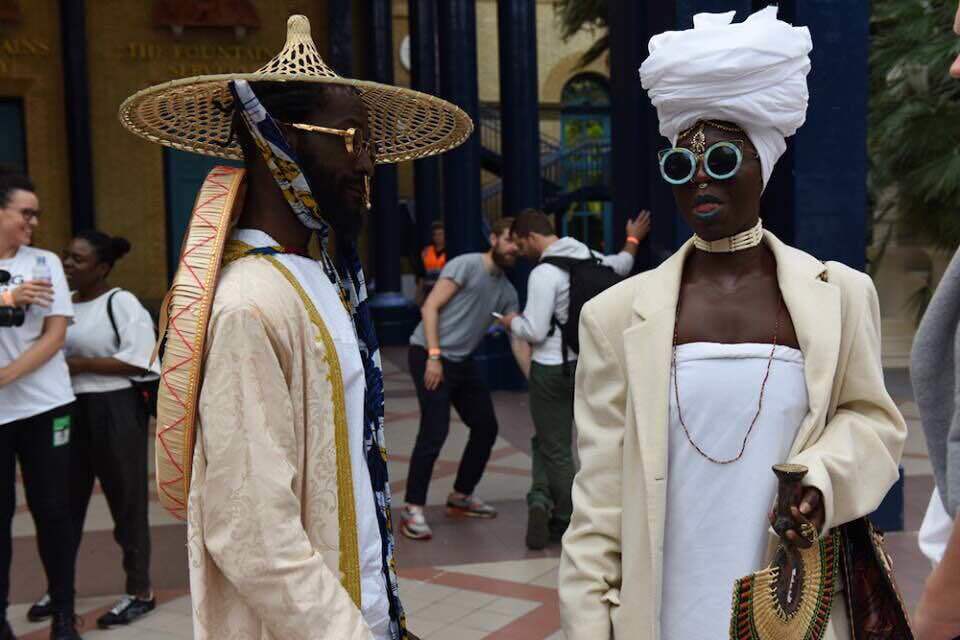 The crowd are met with a line-up that boasts an eclectic mix of neo soul, feminist punk, garage rock, metal and contemporary hip hop, all set across two rooms and three stages, Soulection, i-D and No Hate. AFROPUNK fosters a community energy too, with the SpinThrift market showcasing independent designers selling homeware, apparel and art. Black Cultural Archives and Amnesty International are brought to attention here too, in Activism row. 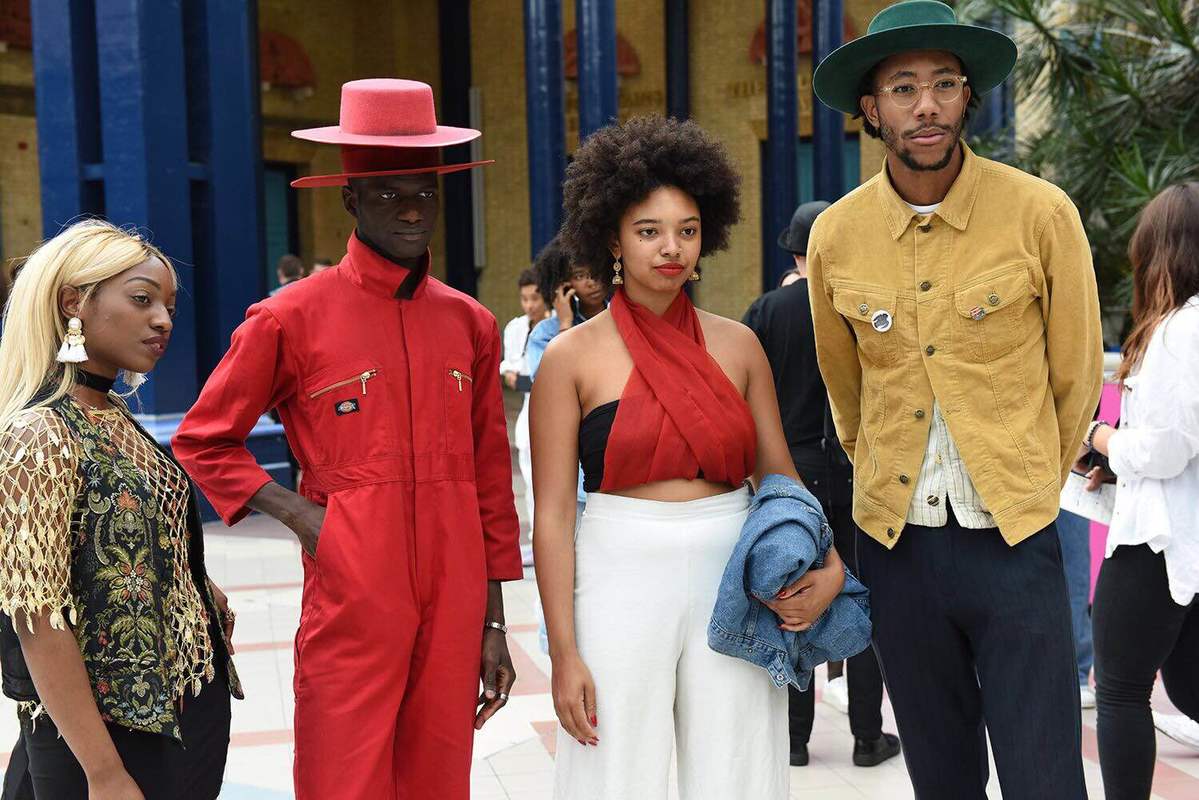 Taking the No Hate stage exclusively for London are Word Sound Power. Made up of dub reggae fusion band Dreadzone, renaissance man Akala and original punk scene pioneer Don Letts. It’s an energetic performance moving seamlessly from fire in the booth lyricism to Akala’s thought provoking ‘Yours and My Children’. Akala addresses the audience with ease, navigating the messages behind his lyrics. All while reminding us if we’re not hoarse and aching by home time, we’re not doing it right. 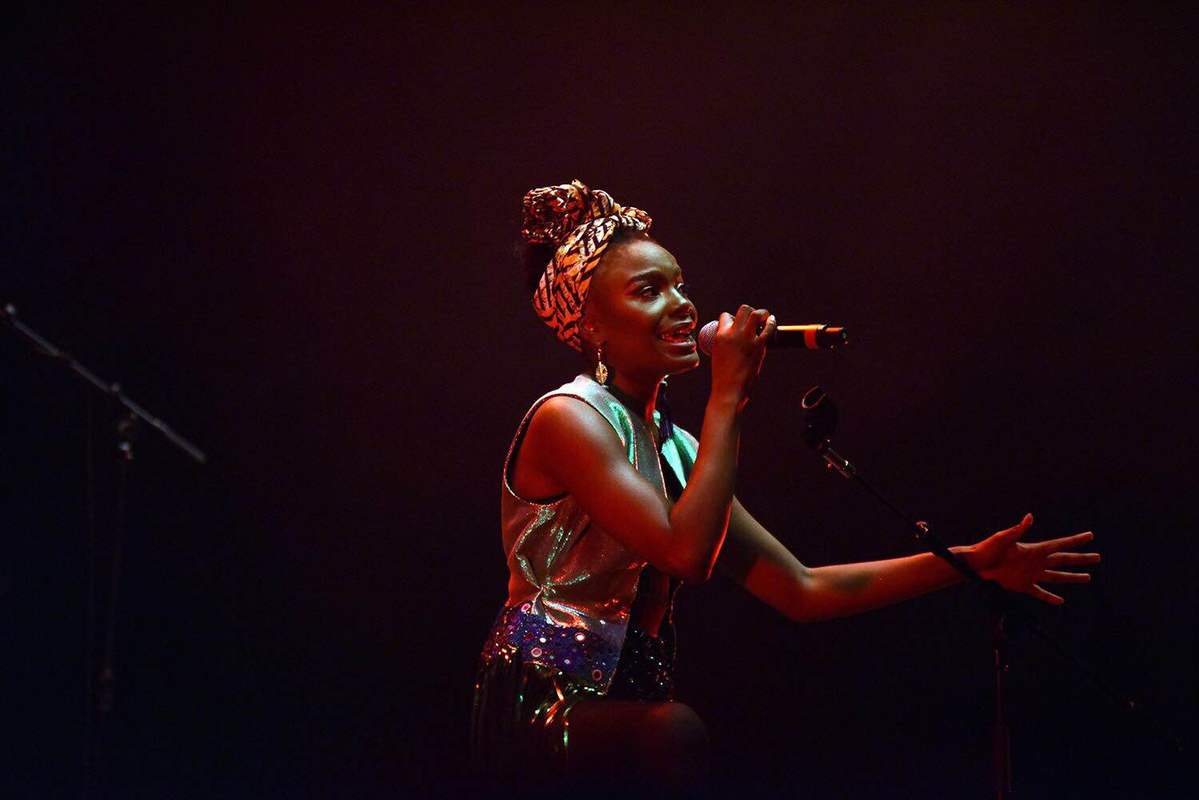 At i-D, Cakes da Killa commands attention in co-ordinate turtle print shirt and shorts. His club rap is riotous, raw and big fun. He delivers collaborative new single 'Up Out My Face' sans Peaches with rapid flow. As a parting gift, he covers little known Erika Jayne anthem 'How Many F**ks Do I Give?’ to raucous applause. Next at No Hate, Benjamin Booker’s garage rock by way of the blues is perfectly timed for the early evening. Big Joanie, London’s own feminist punk trio are a tonic for any fan of the 90’s Riot Grrrl scene. Releasing the only punk scream of the night, their vitriol takes me back to downloading Babes in Toyland on a dial up connection. 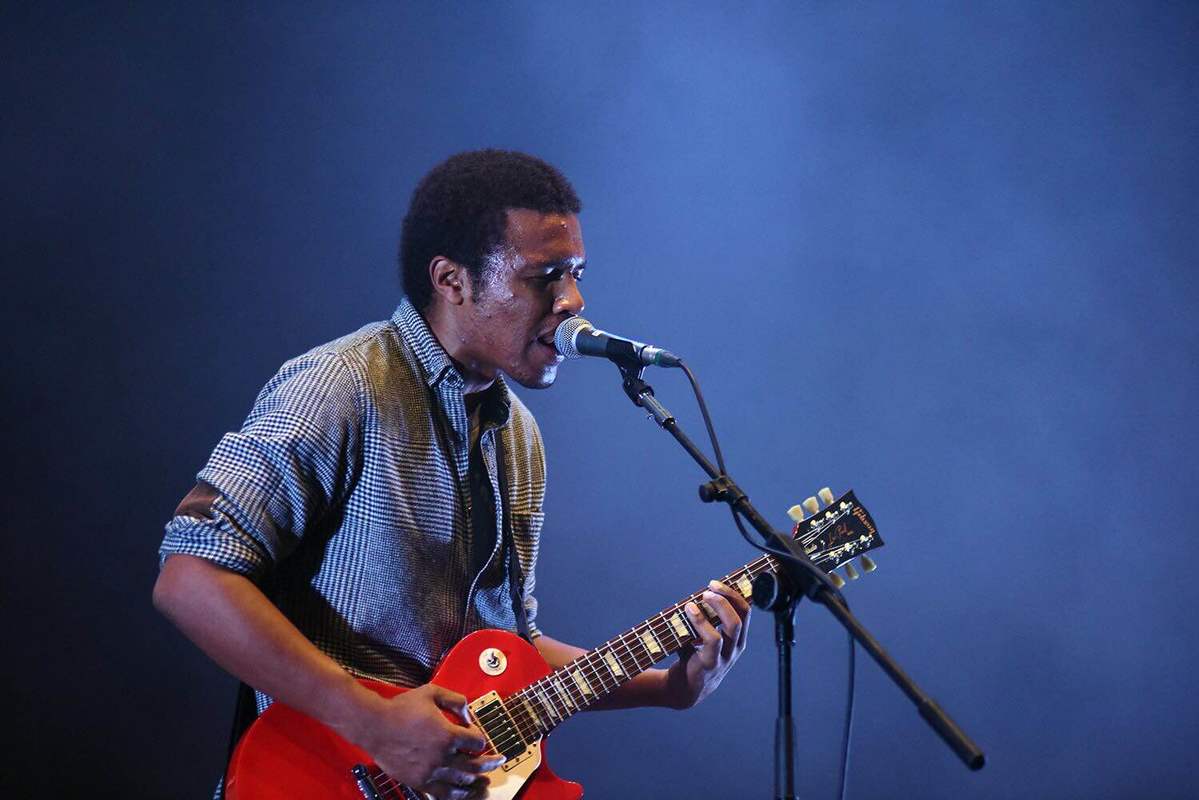 I'm holding fort at the front of i-D for Gaika, whose dark, driving beats are addictive and pleasing. His contrasting dancehall vocals puncture and bounce across tracks 'Machine' and 'Blasphemer'. Surprise guest Kojey Radical wraps up the set, spitting poetic guttural verse fresh from his US tour with Saul Williams. As the hypnotic set closes quickly, the audience are left reeling for more. 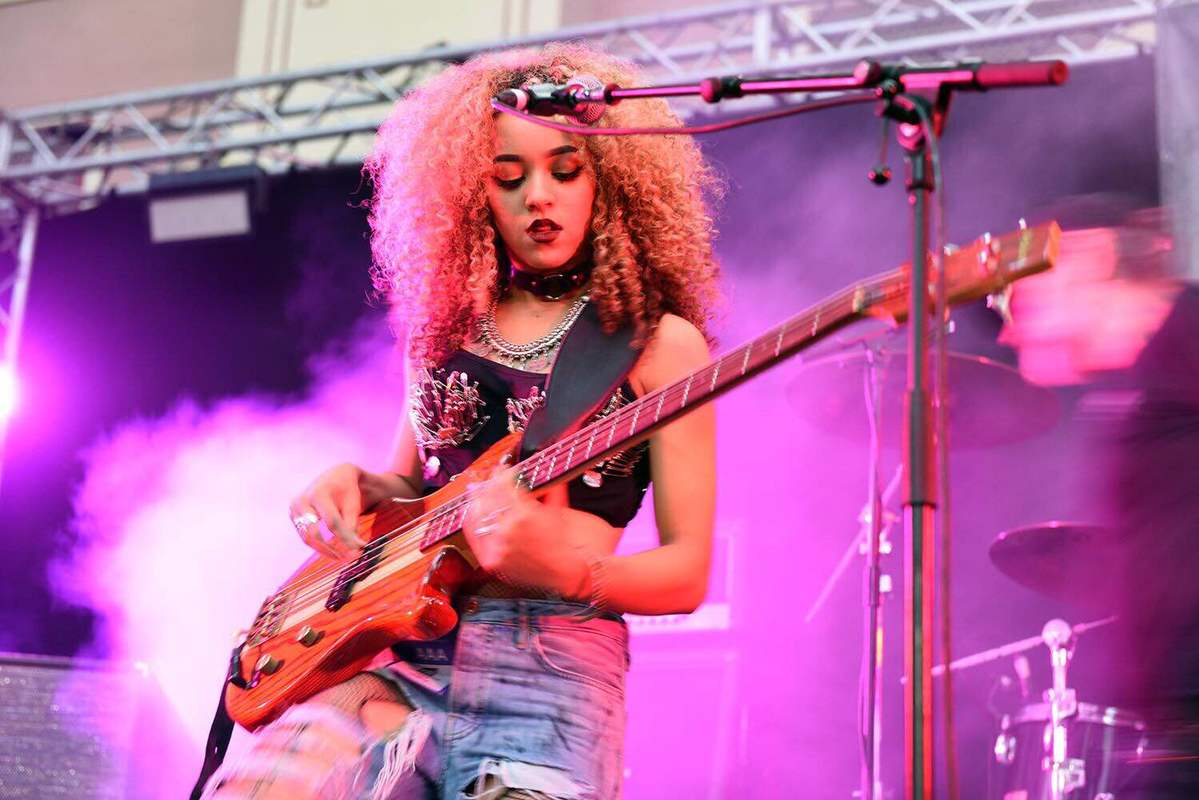 Crowds gather in hushed anticipation for the headline closing set. All eyes to the stage, we watch blurred shapes move beyond the opaque curtain with interest. The veil lifts between our world and Grace Jones to the opening percussion of ‘Nightclubbing’. An electric current bolts through the crowd at the sight of Jones. An apparition in full body paint save for a silk cape and metallic, feathered skull mask. The opening track is met with praise, a song for anyone who dresses to be seen. Grace chats engagingly between tracks, informing us we’re set for stormy weather as she introduces ‘Walking in the Rain’. Costume change No.1 to grass skirt and headpiece as Grace enacts the laid back lead of ‘My Jamaican Guy’. She bridges her back catalogue with recent biographical track ‘Williams Blood’ and a lounge entertainment verse of ‘Amazing Grace’. The lights dim as magenta lasers beam onto Grace’s holographic bowler hat sending jets of light into the crowd. Her cover of Roxy Music’s ‘Love is the Drug’ is intoxicating and dizzy with adrenaline. She plays call and response with the audience on the ‘Oh-oh’ line , teasing her captive choir and breaking into a purr. 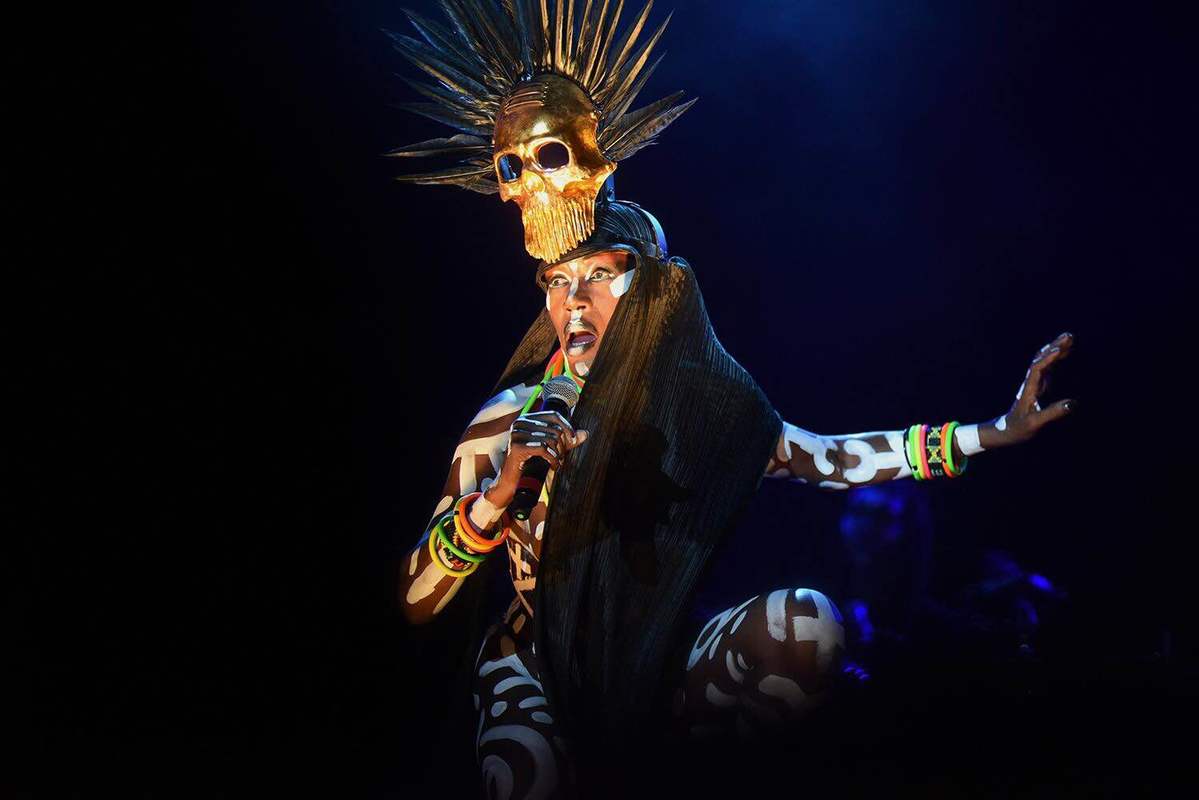 We arrive in downtown New York as a funk bass guitar riff and beeping horns signal cult classic ‘Pull Up to My Bumper’. On stage, Grace is joined by a matching painted male pole dancer who defies gravity. Canons of confetti fire into the audience to rapturous delight. The crowd are wild with excitement as Grace finishes on anthem ‘Slave to The Rhythm’, Hoola hooping for the entire song duration all while not missing a beat of the tune. 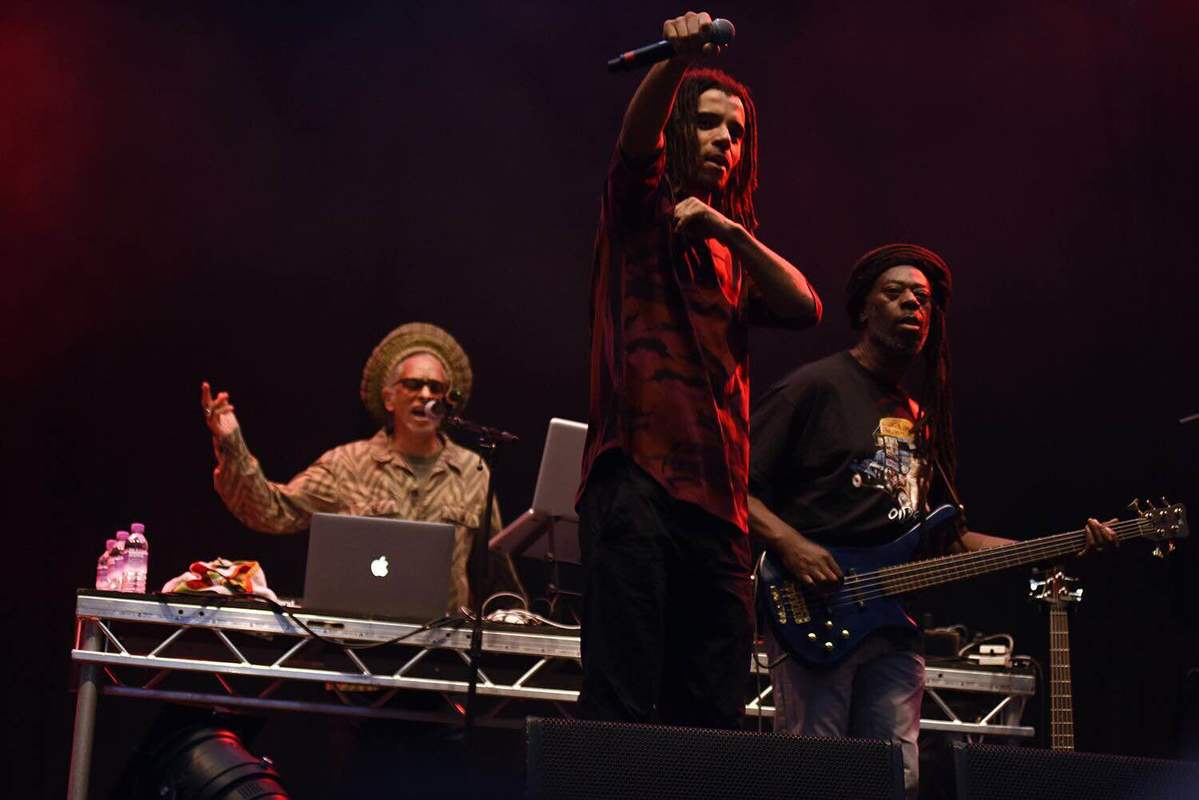 As I leave Alexandra Palace, I hear nothing but praise for Afropunk. Striking up a conversation on the way out with a seen it all type, who used to share studio space with Don Letts. I’m told how happy he is to see punk and garage rock fronted by young black musicians on a major stage. Inspiring, innovative and striking, Afropunk is a very welcome addition to the London festival scene.