Marvel have been churning out their own movies with such success that the remaining character rights controlled by the big Hollywood studios have come under greater scrutiny as to whether Marvel should reclaim them. Sony scrapped their latest version of Spider-man when Andrew Garfield’s iteration didn’t do enough box office business on his second appearance. Now Spider-man is being used by Marvel in Captain America: Civil War as Sony reconsider their take on the superhero.

Meanwhile Fox have proved they can handle the X-Men comfortably when approached as a group (with the exception of the all-action disappointment The Last Stand), but their attempt to give Hugh Jackman’s Wolverine a compelling standalone series has largely led to inconsistencies, mishandled cameos and disappointing supporting characters. Few were worse then the questionable version of Deadpool in X-Men Origins: Wolverine which resonated particularly poorly with fans, yet here we are again with Ryan Reynolds as Wade Wilson - the “merc with the mouth” - giving him the chance to make amends for Deadpool’s last screen outing and his Green Lantern performance.

The Deadpool comic is famous for breaking the ‘fourth wall’ by having Deadpool talk to the reader and not being a superhero - more of an anti-superhero who does what he pleases. He has connections with the X-Men, hence the initial tie-in with Wolverine in Origins, yet is mostly thought of as a maverick who will never pass on the opportunity to make a joke, preferablly aiming low and crude. Breaking the fourth wall and busting out the toilet humour come immediately when we first meet Wade dressed up in his full-body red suit (coloured so you can’t see him bleeding) in the back of a taxi as he welcomes us to the movie, and he never really stops the motormouthing as he heads into a first major fight which explodes into an effects-laden opening act. 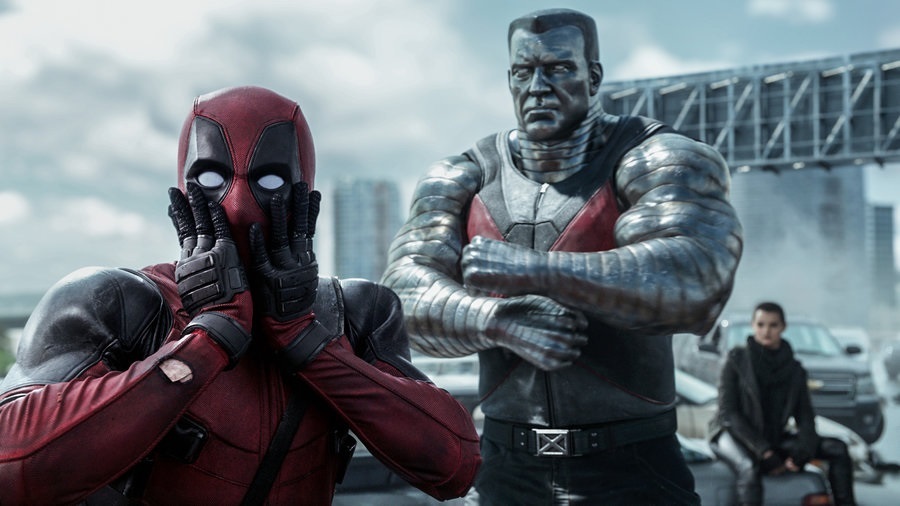 This opening gambit of a set piece from the off delivers for action fans, but also turns out to be the lead-in to flashbacks to his origins. We get to see de-masked Wade Wilson working as a mercenary and hanging with his merc friends in a bar where they take bets on who will die - the ‘Dead Pool’ - then meeting strip club barmaid Vanessa Carlysle (Morena Baccarin) leading to a instant chemistry and serious relationship. Boyfriend Wade provides an amusing counterpoint to the gun-totting Deadpool Wade just seen - particularly the bedroom montage - then he discovers he’s developed cancer. Like all superhero origins stories, it’s not long before Wade is subjected to some kind of experiment - in his case its an attempt to try to cure his cancer via triggering mutant genes. The upside for Wade is his body becomes self-healing, the bad news is he’s disfigured for life and can never face seeing Vanessa again. Cue revenge on the man who administered the ‘cure’ and suddenly we’re back in the taxi on our way to the opening fight.

This might seem like a standard origins story and Reynolds is heading to another superhero fail, however Deadpool’s uniqueness - that fourth wall and toilet-houmour-loving-motormouth - ensure this film is far funnier, and a heck of a lot more fun, than some of the films that have been bloating the Marvel Cinematic Universe. Consider this: two X-Men make an appearance with references to having met Deadpool before, yet rather than bring in a backstory Deadpool references the pair - Colossus (voiced by Stefan Kapicic) and Negasonic Teenage Warhead (Brianna Hildebrand) as being in the film because the producers couldn’t afford any of the A-listers. There’s references to Reynold’s previous failures in superhero movies to give more knowing winks to the audience while Wade’s constant barrage of wise-cracks might be overkill, yet the scattergun approach means enough hit the target to find Deadpool amusing rather than annoying.

One of the beauties of Deadpool is it’s a simple revenge action movie with a little heart, there’s no city/world at threat of destruction and we’re not expected to take everything we see seriously - Deadpool himself certainly doesn’t. This feels like it could be a one-off success so whether there is mileage in the Deadpool character for more standalone films is questionable and he might work better as a cameo regular, but with so many dollars in the bank from this debut, we’ll soon find out. A far better start than Ant-Man and one for Josh Trank to watch after his dismal Fantastic Four reboot.