Hobo With a Shotgun sees Rutger Hauer dish out vigilante justice in a movie that started out as a fake Grindhouse trailer but became an Internet sensation and now a fully-fledged movie. Harking back to the exploitation cinema of the 1970s, Hauer is the Hobo of the title – a man who takes on the evils of the world in a tour-de-force of gratuitous violence, gore and bloody mayhem. In cinemas tomorrow, Hauer talks how he came to star in a film that has already built up a cult following.

The reaction to Hobo With A Shotgun has been nothing short of phenomenal – and rightly so.
I’m pleasantly shocked at how well the film’s been received, because I really didn’t see that coming. I knew that there was quite a following, but the fact that part of the [movie] establishment also came on board and were so friendly, rather than being upset and pissed off, is great. I guess the film is very clear about what it promises to tell you.

You know, not since the first test screening of The Hitcher in 1985 have I seen [one of my movies] get such a great audience reaction as Hobo’ has. It’s the only time that I’ve experienced watching a film with an audience where they know exactly what it is, and what you’re doing, and they know how to appreciate it – it was lovely.

Hobo With A Shotgun doesn’t seem like a project that many established actors would voluntarily sign on to. How did you get involved with it, and what attracted you to the project?
I’d say that about one third of my work involves projects I think I should gamble with, and the more I do them, the more pleasure I get out of them, because you discover things. The script [for Hobo With A Shotgun] was a bit loud and flat, so I wasn’t sure if there was more to tell, or if maybe I hadn’t read it correctly. But once I connected with the director [Jason Eisener] on Skype for an hour – I was shooting a film in Cape Town [South Africa] and he was in Halifax [Canada] – I knew I had to work with him because it would be fun. Going into it, I felt like I was making a dirty, naughty film, with no holding back: I understood what the game was and I enjoyed it. The first thing in our discussion was that we needed to try and layer the characters so we could add more depth to them.

Going into it, I felt like I was making a dirty, naughty film, with no holding back.

So you did have input into the Hobo character and the script?
Yeah. Jason [Eisener] had very specific ideas about the character, because the whole story was based on Dave Brunt, who is a real person walking around in Halifax with his own story – he was the inspiration. Jason wanted me to hang on to that, so my task was to see if I could bring the real character into my movie character. So I studied Dave. He was there [on set] most of the time, and he was very supportive of me playing him. He was very proud that I was pretending to be him. 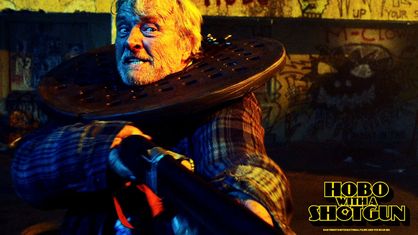 What is Dave Brunt’s story?
He’s a damaged person basically, because he was disabled when a truck drove into him. He settled for a couple of thousand dollars or something, but a big part of his life was ruined. So he became somewhat of an outcast I would think; but he’s also a very pure character who loves nature and knows all about any wild animal you can think of.

The movie is extremely violent, but also totally over-the-top ridiculous. Did you have trouble playing it ‘straight’?
Jason felt that I shouldn’t play it for jokes; that I should be deadly serious and try and deal with the simplicity of his [the Hobo’s] own mind, his sense of pride and honour and purpose. My task was to be deadly serious, because Dave [Brunt] is also very serious about this stuff: you can’t fool around with honour and pride, and sensibility.

Every scene became such an over-the-top soap opera that it was a pure joy to see how everything developed into such ridiculous, crazy stuff.

Because things get so crazy, did you find it hard keeping a straight face during the really insane scenes?
Every scene became such an over-the-top soap opera that it was a pure joy to see how everything developed into such ridiculous, crazy stuff – but of course it was my job to stay in character. Naturally though, after Jason said ‘cut’ you would piss yourself, because of all that had happened during the scene. It’s hard, sure, but I had a lot of fun shooting this movie because it was so wild, so creative, and everyone involved has a love for making movies.

You’ve played some very extreme characters during your career. But were there ever moments while filming particularly insane scenes in Hobo’ when you actually questioned if it was too crazy even for you?
Not really. I just thought that I had to pick my own moments of craziness, so it doesn’t repeat itself, so that it becomes part of the acceleration of shit, so to speak. In a story, you can only burn and kill so many people before it gets boring – you have to be creative. I think that’s what the audience was expecting also. We had to make a movie out of the original trailer and top it, because the expectations were so very high.

Hobo with a Shotgun is released in cinemas tomorrow: go to www.cult-labs.com/hobo for more information.