The Evolution of Gross Out Comedy

!(feature_l)http://relayer.s3.amazonaws.com/articles/spreads/4c964a69c1531723a0000c8d.jpg!The Amerian Pie series is back with its seventh entry: American Pie Presents The Book of Love. The franchise has brought many great characters such as the introduction of the Stiffmeister to the legendary Eugene Levy, not to mention the abundance of cheerleading teens. But more than anything, it will be remembered for its un-relentless dedication to flying the flag of gross-out comedy moments and the latest instalment out on DVD from Monday, December 7th doesn’t disappoint in that respect. To celebrate its release we’ve scoured the comedy hall of fame in order to showcase the evolution of the gross out moment from it’s humble fart gag origins through to full blown childbirth glory…

Blazing Saddles (1974)
Mel Brooks has been pushing the envelope for decades now and some may say he sparked the gross-out revolution in the mid 70s when he unleashed the hilarious fart scene in his comedy classic. Filled with the flatulent fuel of beans, the cowboys let rip to devastating effect to capitalise on the body function that always seems to leave young and old rolling in the aisles.

Animal House (1978)
Director John Landis has always had his finger on the gross-out pulse, whether it be in horror with his ghastly American Werewolf transformation or John Belushi’s earlier lunch scene here. Out to cause mischief, his zany character Bluto fills his mouth with mashed potato then proceeds to echo what a squeezed zit might look like causing a food fight into the bargain.

Porky’s (1982)
For those of you that grew up on this “seminal” teen flick it’s hard not to grin like an idiot when reminiscing on the goofy high points in the Canadian gag extravaganza. The highlight, though, has to be the moment when Tommy sticks his love truncheon through a hole in the girls’ shower room only to get it manhandled by the frumpy PE teacher Beulah Balbricker. 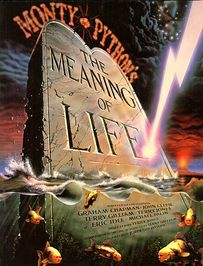 Monty Python’s The Meaning of Life (1983)
Heading over to Blighty, the maverick Python crew went one further than their Stateside counterpart Brooks with “Mr Creosote” in this chucklefest. Armed with an appetite the size of the restaurant he was sat in, Terry Jones’ odious character proceeds to wolf down the whole menu before regurgitating his stomach contents ahead of the final combustible moment. Go on sir, it is only wafer thin…

Kingpin (1996)
It took a while for the gross-out scene to return, however the Farrelly Brothers built their career on it. They flexed their grisly muscles in Dumb and Dumber, before dreaming up this horrific landlady scene when Roy (Woody Harrelson) is forced to head down south on her rotten lady garden to make up the rent. Kudos to you if you can avoid a little dry retch.

There’s Something About Mary (1998)
How do you top the nauseating Kingpin hag? You concoct an even more squirm inducing moment, for men at any rate, in your next comedy blockbuster. The Farrellys put Ben Stiller’s character Ted through the mincer in this flashback cracker, his rush to attend the prom causing him to get his tackle stuck in his zip. The paramedic’s “We got a bleeder!” line is added genius. 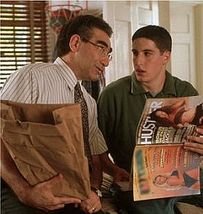 American Pie (1999)
Seann William Scott is a “game for anything type of guy” when it comes to film. Thankfully for him, he didn’t actually have to drink a cup of Kevin’s ball butter during this particular scene. However, it doesn’t make it any less gruesome when we have to sit through Stifler’s consumption of what he thinks is Pale Ale before the reality dawns on his face in mesmeric fashion.

Jackass: The Movie (2002)
A lame excuse to cobble together a bunch of scenes from a hit TV show it may be, but it brought the house down when the powers that be let it loose in the multiplex. The standout moment from Johnny Knoxville’s daring dudes has to be when comedy cohort Dave England strolls into a hardware store and opens the hatches in full view of everyone on the display toilet. We salute you. 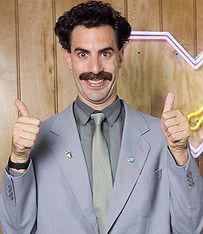 Borat (2006)
Sacha Baron Cohen has no shame. Well it seems that way after watching his Kazakh character blunder his way across the United States in an effort to meet Pammy Anderson. The Big Kahuna that left audiences looking through their fingers arrives when he engages in a hairy, sweaty and butt naked wrestling match/chase with his roly poly sidekick Azamat in a packed hotel.

Knocked Up (2007)
When you give someone like Judd Apatow the keys to the comedy kingdom, don’t expect a bunch of routine scenes to make your popcorn taste sweeter. Amongst the cracking set pieces and dialogue, he pushes the taste boundaries with a close-up of Leslie Mann’s character Debbie giving birth with hubby Pete (Paul Rudd) and Ben (Seth Rogen) in attendance. Open University, eat your heart out.

American Pie Presents The Book of Love is out on DVD from Monday, November 7th.