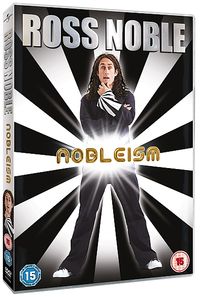 Once Ross Noble gets started, there’s no stopping him. His style of spontaneous stand-up sees him hyperactively prancing around the stage while making observations about his audience which take him on all manner of tangents with hardly a pause for breath. This Nobleism show at the Liverpool Empire Theatre was recorded at the height of his sell-out tour of the same name when he became the first stand-up comic to have his show broadcast live via satellite into cinemas across the UK. Coming in at two hours, there’s so much material covered he puts many of his contemporaries to shame.

Ross Noble continues to reign as the ad-lib king.

Noble puts in an impressive display on Nobleism, helped along by various random objects and messages thrown onto the stage for him to muse over. A Dr. Who driving licence leads to the sci-fi fan receiving grief from Noble while his antics with an afro wig tie in nicely with his jokes about sexually transmitted diseases and even matches his long black hair. The inventiveness Noble shows with tackling each and every thing given to him makes you wish you could provide him with some cheap or tacky children’s toy to play with on stage. Much like the cinema-viewers of this performance, we can only sit back and watch him — but it doesn’t detract from the performance, especially as the audience members in Liverpool have an unhealthy obsession with him and have a few bizarre notes for him to read out.

For a man who looks constantly awkward, can’t stop moving and seems to speak his stream-of-consciousness, Noble ensures you rarely see the jokes coming and frequently conjures up an obscure reference which will have you in stitches. You might question whether his dislike of Tony Hart is irrational, however 99 percent of the time you can’t fault his skewed take on life. On Nobleism Ross Noble continues to reign as the ad-lib king.