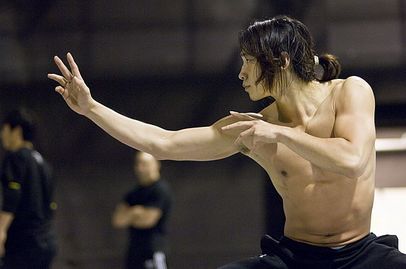 If you like your films packed full of tense action and martial arts mastery then look no further than Ninja Assassin, out now on Blu-ray, DVD, On-Demand and Digital Download on 17th May. Produced by the combined creative geniuses of the Wachowski Brothers and Hollywood hot-shot Joel Silver, Ninja Assassin tells the story of a young assassin named Raizo (Rain), who turns his back on the Ozunu clan that raised him in order to seek revenge for the heartless murders they committed against those he held dear.

Now we all know that one should never knowingly double-cross a ninja, especially when they’ve been trained in the art of death since the age of six. However some movie mugs just will not learn. So what better way to celebrate the release of this visually stunning, blood filled tour de force, than to remember the most awesome action films that have schooled us in the art of ‘who not to mess with’ throughout the years.

_ Death Wish _ (1974)
Charles Bronson avenges the murder of his wife and sadistic rape of his daughter by good for nothing-street punks. Proving that even the most peaceful men can be pushed over the edge, Death Wish is the quintessential revenge flick.

!(feature_l)http://relayer.s3.amazonaws.com/articles/spreads/4c964a6ac1531723a0000c9d.jpg!_ Commando _ (1985)
It’s pretty obvious that kidnapping Arnie’s daughter is a one-way ticket to death. The governor of California crashes a car at 90mph, punches a man clean through a wall and impales another with a steam pipe all because an evil, exiled dictator kidnaps little Jenny.

_ Kickboxer _ (1989)
Like many martial arts flicks, this follows a classic path… Ruthless bad guy doesn’t check out whether their victim has any martial arts trained siblings; hero swears an oath of revenge, goes to training camp and gets tough. Cue the obligatory love interest, some seriously bad disco dancing and JVCD is ready for a final battle sequence to the death.

_ The Crow _ (1994)
Even a brutal death doesn’t stop moody rock star Eric Draven from coming back and dishing out justice to the men that threw him out of a window before raping and murdering his fiancee. Unlike most dead musicians who would probably use the afterlife to write some of their best material (looking at you Tupac) Eric Draven is resurrected by a mysterious crow, armed with new awesome powers and completes the effect with a slick make-up job.

!(feature_r)http://relayer.s3.amazonaws.com/articles/spreads/4c964a6ac1531723a0000c9e.jpg!_ Desperado _ (1995)
Continuing the trend of hard done by musicians Desperado brings us Antonio Banderas as El Mariachi, back to settle a score with someone… anyone… everyone. Trundling through a remote Mexican town armed with a guitar case full of guns, he tracks down the people who are responsible for the death of the woman he loved. It’s all very grim but Salma Hayek adds a touch of glamour.

_ Memento _ (2000)
How do you avenge the murder of your wife when you suffer from short-term memory loss? Easy. Carry around lots of little notes to yourself, tattoo important facts all over your body and arm yourself with a Polaroid camera. Christopher Nolan gave us a revenge story unlike any other. Knowing whom to trust can be a bitch in normal circumstances but it’s even worse when you can’t remember anything past 60 seconds.

_ Gladiator _ (2000)
Nowadays we all know not to cross Russell Crowe for fear of getting smacked in the head with a phone but back in 2000, when the incestuous prince and future emperor Commudus orders the murder of our hero’s wife and young son he unleashes the beast. Rome may not have been built in day but it takes Russell about 12 minutes to reduce it to rubble.

_ Oldboy _ (2003)
Revenge is literally a dish best served cold in this dark Korean thriller. A seemingly ordinary man becomes imprisoned for 15 years with no explanation on his daughter’s birthday. When he is released he is given some money, a cell phone and an expensive suit. His quest for answers and vengeance will take him to depths of human emotion. One thing is for sure — he will never be the same man again.

!(feature_l)http://relayer.s3.amazonaws.com/articles/spreads/4c964a6ac1531723a0000c9f.jpg!_ Kill Bill _ (2003/2004)
The picture perfect wedding day was not to be. It’s bad enough having your guests gunned down in front of you (well, we could probably all live without the in-laws) but when the very man you were trying to escape from shoots you in the head, puts you into a coma and steals your child from your womb, you know things have gone to far. Bill will soon realise that hell hath no fury like a woman scorned.

_ Taken _ (2008)
After a stand out role as Ra’s al Ghul in Batman Begins, it seemed that Liam Neeson was more likely to be the avenged rather than the avenger. That was until some goon decided it was time to kidnap his daughter and sell her into the sex trade. Not content to leave this matter to the law, Mr. Neeson exacts his revenge the old school way… by hunting down a brutally murdering all those responsible for 93 blood soaked minutes.

If this take of revenge has whet your appetite for action, check out Ninja Assassin on Blu-ray and DVD.