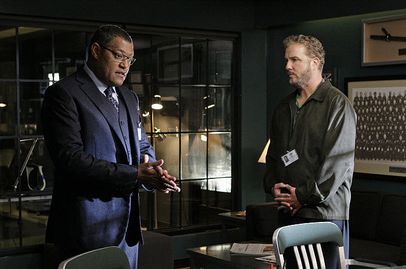 On October 6th 2000 the world was forever changed when an American crime drama television series premiered in the US. That series, CSI, follows a group of Las Vegas criminalists as they uncover physical evidence to solve a range of crimes. It became the most watched show on TV by 2002, and has since become a phenomenon still going strong after 10 years. For all you newbies out there, here’s a catch up ahead of the release of season nine on DVD and Blu-ray this Monday, March 1st. Without wasting anymore time well start with those immortal words… “Previously on CSI”.

Season 1
(Premier date: October 6 2000)
The pilot paved the way for the groundbreaking series. Beginning with a body being found in a bathtub it all looked simple enough. This was just an open and shut suicide case. It all proved to be anything but as we were catapulted into the world of Crime Scene Investigation. We quickly learned that nothing is ever simple and there is always more than meets the eye. Highlights included a perplexing quadruple murder and the memorable death of a first class passenger on an airline. The season finale pulled out all the stops with a tense fight to lure a serial killer out of hiding by using CSI Sara Sidle as bait.

Season 2
(Premier date: September 27 2001)
By season two, the public was waiting with baited breath. How was the show going to top last season? Easy, we were treated to a robbery committed by a trio of transvestites, the case of an ice hockey player that died mid-game, a devastating bus crash that claimed the life of nine people and the first ever cross-over episode involving the team from CSI: Miami.

!(feature_l)http://relayer.s3.amazonaws.com/articles/spreads/4c964a6ac1531723a0000c98.jpg! Season 3
(Premier date: September 26 2002)
As soon as season three began we didn’t even have a chance to breathe as a poker player drops dead during a high stakes game. This was the season we also witnessed the world of Law Enforcement crash head on with the world of Hollywood celebrities as a famous movie star is accused of murder. Also, a dwarf is found hanging from a rope at a little people’s convention and the team get knocked for six when they are shown a snuff film showing the real life murder of a young woman. This season also featured a special 90min episode titled “Lady Heather’s Box” featuring a murder at a dominatrix club.

Season 4
(Premier date: September 25 2003)
Season four features one of the most chilling episodes of the entire show. The episode “Homebodies” features the team investigating the mummified remains of an old woman found in a closet. The CSI’s are also called in to investigate the death of a baby in a locked car and later in the series the team investigate the murder of a man found dressed in a racoon costume lying across a busy road. Needless to say this isn’t your ordinary everyday type of road kill.

!(feature_r)http://relayer.s3.amazonaws.com/articles/spreads/4c964a6ac1531723a0000c99.jpg! Season 5
(Premier date: September 24 2004)
Season five treated us to a new member of the CSI team. Greg Sanders who had previously worked in the lab joins the team and has his first assignment alongside Grissom investigating a shooting at a nightclub. Meanwhile Sara and Nick find themselves investigating the body of a supposed ‘alien’ buried in a shallow grave near the site of Area 51. An impressive episode consisting of the team investigating four murders at once ramps up the tension and season five ends in spectacular style with the epic two-parter “Grave Danger” directed by none other than Quentin Tarantino. “Grave Danger” has been wildly acknowledged as some of the best TV ever created.

Season 6
(Premier date: September 22 2005)
Season six finds the members of the CSI team still reeling from the events of “Grave Danger”. All of them find it hard to concentrate and future cases become compromised. Highlights of the season include a body found stuffed up a chimney, an episode where the team are followed by a reality TV crew and the case of a teenage boy on trial for murder that blows wide open when his 12-year-old sister admits to the killing herself. We end the season on all time low when one of the team is shot in the line of duty. As the remaining CSI’s wait by their teammates’ bedside they begin to realise that the worst could happen.

Season 7
(Premier date: September 21 2006)
A murder on the set of a Cirque Du Soliel show kick starts the seventh season nicely. Things begin to get complicated as we are introduced to the so-called miniature killer. A murderer that leaves detailed miniature models of the crime scene next to the bodies of the victims. An inspired episode called “Toe Tags” is a massive highlight as we are treated to the deceased victims of past crimes giving narrations to their own murder investigations. This proved that the show was still fresh and original even after seven years. Elsewhere six showgirls are found murdered in their rented apartments and the miniature killer continues to taunt our heroes.

Season 8
(Premier date: September 27 2007)
Season eight suffered heavily from the writers strike and as a result is the shortest season to date. Unlike other shows, the writer’s strike didn’t affect the overall quality of the show and fans were treated to two cross-over episodes with fellow drama series Without A Trace. A gruesome murder involving a baby girl found in a box affects Catherine so much that she puts her entire career on the line in trying to solve the case and another classic season finale features Warrick being accused of murdering a Las Vegas gangster. This season also saw the dramatic departure of Grissom’s long-term love interest Sara Siddle.

!(feature_l)http://relayer.s3.amazonaws.com/articles/spreads/4c964a6ac1531723a0000c9a.jpg! Season 9
(Release date: March 1 2010)
So dust off your DNA analyser, take out the fingerprint powder and get ready to rejoin your friendly neighbourhood Crime Scene Investigation Team. Grissom and his trustworthy fellowship are older, wiser and without doubt a lot more world wary. Season nine sees new arrivals as well as familiar faces depart. Whatever happens we can be sure that sin city will most definitely live up to its name. Nine years on CSI remains the holy grail of television shows.

CSI Vegas Season 9 is available to buy on DVD and Blu-ray from Monday, March 1st. All previous seasons are also available.