The first release, Dragon Eyes is a martial arts-inflected gang war tale starring MMA star Cung Le as a lone good-guy in a city full of warring tribes and corrupt officials. The plot isn’t going to win awards, but the action is very impressive, with some UFC stars as the legendary JCVD himself starring, and a vibrant soundtrack keeps it rolling along well. 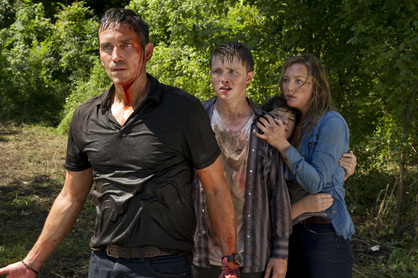 _Transit _ is a real thriller and intense from start to finish. Jim Caviezel stars as a guy trying to take his family on a unifying campaing trip after he’s released from a stint in prison for tax fraud, but his plans go more than awry when their vehicle is used to stash a holdall full of money by a gang of criminals needing looking for safe passage through a police roadblock. The bad guys need their money back, and the film is 90 odd minutes of high-speed, full-on car chases, fist fights and twists and turns – and the action is pretty violent at points (you can tell the producers have a horror CV). Performances are fairly one-note but mostly decent – Caviezel, Elizabeth Rohm and James Frain standing above the other cast.

Stash House pitches itself as another intense outing, this time though mixing trapped space ideas from films like Panic Room and Red Eye with the home invasion style of The Strangers etc. Sean Faris and Briana Evigan buy a new home on the cheap and realise why when they find a huge load of smack stored in the walls, and then it all kicks off when Dolph Ludgren and pals turn up to claim their gear. Evigan is good in a bit of a change from Step Up 2, and fans of the Swedish action hero will be pleased to know that Dolph delivers! 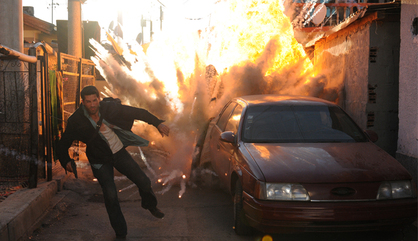 El Gringo flows in the vein of a Robert Rodriguez, Quentin Tarantino affair. Violent south of the border action with an edge of comicness mixed in, aided by a glorious Manowar soundtrack, and some colourful characters. Of these characters the title role is filled by the more than able Scott Adkins and Christian Slater pops up as a dodgy lawman.

Lastly, The Philly Kid, as the title suggests, is a fighting film with impressive action in the fight scene set-pieces (there’s some MMA stars at work here too) with a strong eye on the dramatic elements. Though boasting a cast including familiar faces like Neal McDonough, Michael Jai White and even Devon Sawa its Wes Chatham in the lead role who impresses most with a strong performance both outside as well as inside the ring. It’s not up to the level of the films mentioned above, though I dont think any of these were necessarily expected to be classics. They’re all solid genre films though, easy and enjoyable to watch.

Dragon Eyes and Transit are out now.
Stash House, El Gringo and The Philly Kid are coming soon.