A new free exhibition, Punk 1976-1978, opens Friday 13th May at The British Library in London. It explores the roots of the musical phenomenon through words and artefacts of the artists at its visceral, beating heart. From beginnings in the French Situationist movement and New York City art-rock scene, through to the rise and fall of the Sex Pistols. It forms part of Punk London’s year of events celebrating 40 years of the remarkable impact it had on independent music and the arts. 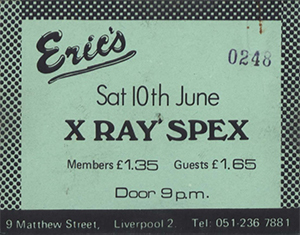 There is a lot for the music lover here, as well as those interested in typography, photography and fashion design of the era. Drawing on the Library’s extensive archives, it features a huge range of rare fanzines such as the first Sniffin’ Glue in 1977 and the first and only edition of the Sex Pistols’ official zine, Anarchy in the UK. Original posters, gig tickets and flyers from the clubs that would become synonymous with the scene are displayed alongside original record sleeves, many of which have never been on public display before. Highlights include John Peel’s personal copy of the Undertones’ single, Teenage Kicks, and a rare copy of the Sex Pistol’s God Save the Queen single, which was never released because the A&M record label signed and dropped the band within one week. 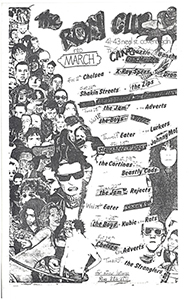 I was excited to find fashion highlights that I’d read about in recently published autobiographies by The Slits’ Viv Albertine, and Vivienne Westwood, including original t-shirts from her SEX boutique on the Kings Road looking surprisingly well preserved for their forty-something age. At the time, punk was challenging the conventional image of women in rock bands and it is great to see Poly Styrene, Siouxsie Sioux and The Slits taking centre stage and side by side Sid Vicious, Mick Jones et al. Filmed interviews for Women in Punk by Gina Birch, founding member of The Raincoats, will run throughout the exhibition.

This being The British Library, many of the books that document the era are available to buy in the record-store themed pop up specially created for the event. As a kid, the gift shop was often 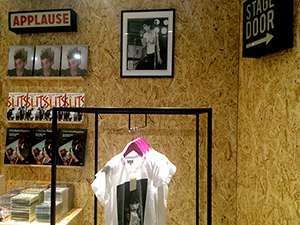 my favourite bit of a trip to a heritage site or gallery, much to the dismay of my parents trying to educate me, and this one does not disappoint. Visual Merchandising experts Exhibeo VM have created a space for The British Library Shop that nods to gig venue green rooms, back stage areas replete with chipboard walls and record shop rummaging in the crates. It offers limited edition prints by punk photographer Sheila Rock, along with a range of merchandise including record players, homeware, tshirts and jewellery. Listen to vinyl for sale in the 1970s replica listening booth on loan from Mick Jones’ Rock n Roll Public Library, before climbing into the retro black and white photobooth and take away a memento of your visit with your friends and your new record haul. 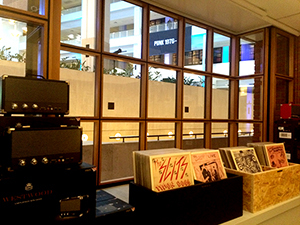