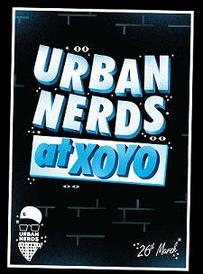 Bingo Beats boss, Rinse FM resident and all-round bass brain DJ Zinc turned his style on its head to become known for a unique house hybrid that blends deep and funky led beats with dark jungle and dubstep influenced basslines. His Crack House EPs have been spreading his sound and this will be the first time he’s played an Urban Nerds party since their Carnival warm-up back in 2009. The Newham Generals, aka D Double E and Footsie, are grime scene veterans among the most respected underground acts in the UK today with a career spanning three decades, defined by anthems like “Frontline” and “Prangman”. They’ve continually pushed forwatf the biggest underground beats and working with some of the biggest and most credible producers in the UK. Alongside Rinse FM’s DJ Tubby the crew will perform a live show for Urban Nerds.

Support from Hot City will see a mash-up of 2-step, garage, funky and ravey house while The Engine Earz bring a highly unique, fresh take on dubstep. Urban Nerds residents Rattus Rattus and Klose One will be dropping their bass bombs too while in room two Marcus Nasty gets the first chance to shine as a new resident for Urban Nerds.

Marcus himself is undoubtedly one of the pioneers of the UK funky scene, as well as a long time supporter of grime, known by many as the former head of leading crew, N.A.S.T.Y. Joining him at XOYO are fellow Rinse FM selectors and purveyors of grime, DJs Mak 10 and Spyro, plus fire-tongued MC, Lil Nasty. Legendary garage producer Scott Garcia, the man behind the still hyped old skool anthem “It’s a London Thing”. At the other end of the pirate radio spectrum, Dejavu FM’s Weeksey and Soulserious Records’Sunday Roast & Jook 10 bring the deeper side of funky.