Take a tour of Tobacco Dock Virtual with SB.TV founder Jamal Edwards ahead of the free-to-attend opening weekend. Organisers LWE have also revealed the set times for Friday, April 2nd and Saturday, April 3rd while Saturday headliners Chase & Status have released a short clip from their full length interview with Take Note LDN.

Take the TDv tour with Jamal Edwards on YouTube:

Tobacco Dock Virtual has also revealed interactive games are coming to the TDv platform, including ‘Like A Broken Record’ which invites guests to collect four pieces of a broken record to unlock unreleased tracks from Chase & Status, Adam Beyer, Skream and ALISHA.

The game will run from 5pm to 8pm in the Green Room ahead of each show. Meanwhile Take Note LDN will present artist interviews and content hosted by Emerald. Expect interviews exploring the importance of club culture, a look at the positive change resulting from the event pause, and implications of the music industry linking with gaming and virtual reality worlds. Take Note’s session will end with the launch of Take Note Radio and shining the spotlight on their rising talents.

Take Note’s programme will be broadcast on a cinema-sized screen within the Tobacco Dock Virtual world.

Set times for the two opening weekend shows are below, with Friday, April 2nd focused on house and techno before Saturday, April 3rd shifts to low end vibes such as jungle, drum & bass and UKG.

To create and account to join the action over Easter go to tobaccodockvirtual.com. 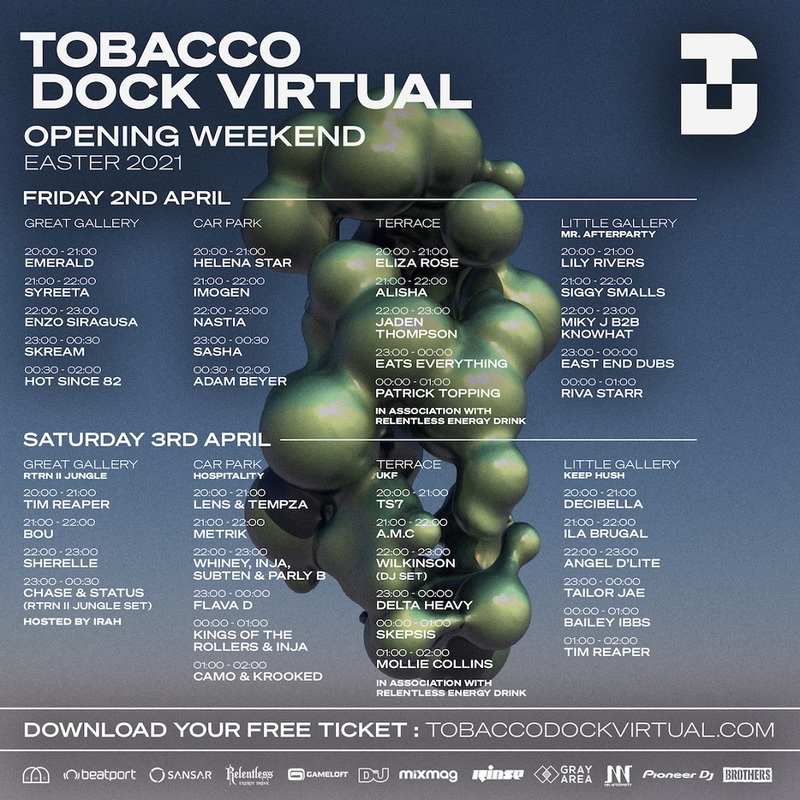