A formidable techno and electro line-up soundtracks the final show from The Hydra at Printworks London in 2019. A wealth of experienced talent such as Robert Hood, Dave Clarke and Vitalic will be in the Press Halls while the Dark Room sees Levon Vincent and Shed’s live EQD show among a formidable supporting line-up on Saturday, December 21st.

Seminal techno city Detroit is well represented in the Press Halls with native Robert Hood headlining plus DJ Stingray and DJ Bone. Hood returns to play The Hydra for the first time in four years armed with successful releases as Floorplan with his daughter Lyric, but this show is likely to showcase his minimal stylings for which is has dedicated much of his solo output to.

DJ Stingray’s electro goes up against Marcel Dettmann’s raw leanings in a back-to-back set that serves up plenty of promise. This one could be an eclectic pairing with inspired results. DJ Bone will serve up a lesson in the more technical art of DJing while the Baron of techno, Dave Clarke, joins him in making a eagerly-awaited Printworks debut.

Rounding out the Press Halls is a live set from Vitalic who produced forward-thinking electro album OK Cowboy back in 2005 and has been blazing a trail for big beats and gritty synths ever since. Alienata is on warm up duties, but get down early as she’s been revered by Dave Clarke, DJ Stingray and Ben Sims.

In the Dark Room, Shed will be adopting his EQD alias for a live show that will showcase a rarely-heard side to his sound, while near Detoir born, Berlin residing Laurel Halo will get behind the decks armed with that melting pot of esteemed electronic music heritage.

For tickets and details go to printworkslondon.co.uk. 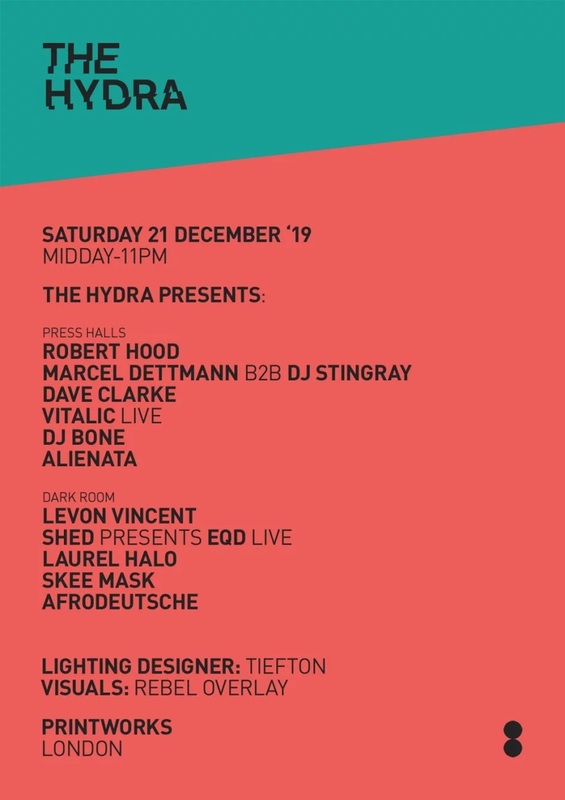