The brainchild of friends including the founders of Percolate and Love International, Waterworks aims to give all sets equal billing so rising stars get to rub shoulders the deepest of crate diggers.

Body Hammer will be represented by Joe Hart and Scott Fraser while Bottom Heavy’s Dan Beaumont and Wes Baggaley will be there. Jade Seatle and Jane Fitz of Night Moves are also on the billing.

Team Waterworks said: “As soon as we found the site, the idea for Waterworks almost instantaneously came about.

“The site is fully enclosed, meaning that it feels detached from the city, arriving in a destination you can hardly imagine from the busy metropolis nearby. It has the natural beauty of wildflower meadows, hinting at the adjacent nature reserve. It is hemmed in by trees along the river, that contrast with the industrial landscape that lies just beyond its borders.

“The nearest residents are at a reasonable distance from the site, making it ideal for minimising noise issues. We are working alongside a seasoned sound design team, so we can deliver the volume and sound pressure proper dance music deserves; we are confident of levels that are unparalleled in East London. We want to create intimate and architecturally intriguing open-air spaces that meld with the surroundings. We want to form unique dancefloors - somewhere to lose yourself in the moment.

“Musically, we want to focus on some of the different flavours, strands and genres of dance music that have come to shape the rich musical heritage of London. This sonic palette stretches from the weirder sounds of Equiknoxx and Cõvco to the energy of younger artists like Sicaria Sound and Sherelle, to the gritty lyricism of Novelist. We want to pay homage to scene veterans like Andrew Weatherall and Mala, while also showcasing the current stalwarts of the scene like Ben UFO, Saoirse, Objekt and Shanti Celeste. Finally, we want to invite a few international guests from our extended friends and family who we feel are masters of their field bringing something exceptional, such as Eris Drew, Nicolas Lutz and Job Jobse.

“Importantly - we don’t want something dominated by ‘headliners’, but a lineup that is greater than the sum of its parts. We don’t want to barge on to the festival calendar with excessive exclusivities that inhibit the vital local club scene. We also want to help provide a platform for the younger artists that we are really excited about with set times that you might usually find for a headline act. We want to build a festival that our mates would come to but also for dance music lovers, young or old.”

For tickets and details go to waterworksfestival.co.uk. 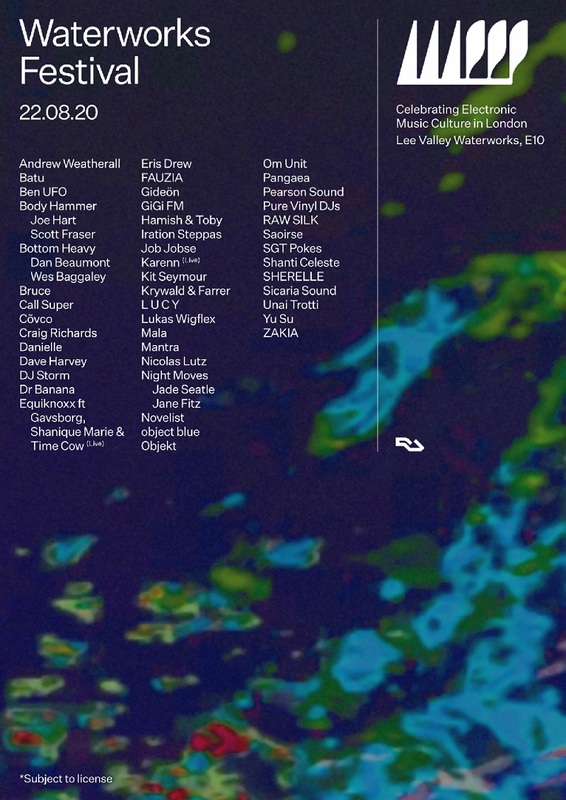