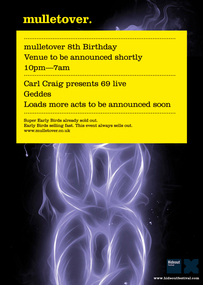 mulletover celebrates its eighth birthday by hosting Carl Craig at a secret London warehouse and releasing their first ever compilation album. Carl Craig will present his 69 live show on Thursday, April 5th while Geddes will get behind the decks to give a flavour of his mix on the mulletover CD.

Carl Craig’s 69 evolved from the celebrations for the 20th anniversary of his Planet-E imprint last year. As 69, Carl Craig produced the first ever EP for Planet-E in 1991 – 4 Jazz Funk Classics – a release inspired from his love of the disturbing sound and vision of English avant-garde group, Throbbing Gristle. Further releases included Sound on Sound, Jam The Box, Desire, Pungtang and, an album from 69, The Sound Of Music. Planet-E also released a limited edition 69 vinyl box-set in 2009, entitled The Legendary Adventures Of A Filter King. For the 69 show, Carl Craig will perform a selection of the finest 69 classic releases live, infused with masks, darkness and “retina popping” visuals.

More line-up details will be released in the coming weeks.