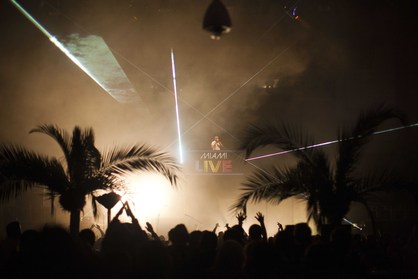 The Smirnoff Nightlife Exchange Project is returning to the UK following a cultural swap which saw London and Miami switch their traditional Saturday night’s out. London’s Troxy saw 2,000 revellers enjoy a Miami-style night out, and now Hatfield, Edinburgh and a third city to be voted for by you will see repeat visits from across the Atlantic.

Overwhelming demand from the public means The Smirnoff Nightlife Exchange Project will see the vodka brand request fans to rally their local friends and vote for the event to come to their town via the Smirnoff GB Facebook page. Visitors to the page be able to vote for their local venue and those with competitive spirits will be able to “un-vote” rival venues, taking them down at the click of a button. There will also be exciting prizes up for grabs for those that get the most involved, including VIP tickets to the final event in May.

For those who would prefer to get along to a party sooner, Saturday, March 19th will see Smirnoff host a night at The City nightclub in Edinburgh ahead of a visit to The Forum in Hatfield on Saturday, March 25th. Guests at all three events can expect a live performance on the Miami Live stage from one of the hottest DJ’s of the Miami scene – Damaged Goods – who will be jetting in especially for the one off shows. A true pioneer of the dance music scene, Damaged Goods has gained a reputation as one of the premier DJ’s in Miami with his residency at infamous Miami nightclub Mansion as well as regularly playing the Miami Winter Music Conference. Expect a mash-up of electro, house, hip-Hop, dubstep and trance to create a night to remember. If Nikki beach is more your style, experience palm trees overhead in the main room before embracing Little Havana, notorious for Latino dancers and carnival entertainment.

Neil Skinner, of Smirnoff GB said: “The Smirnoff Nightlife Exchange Project is without doubt our biggest and most ambitious activity to date. The Smirnoff Co. has been on a mission to seek out the most extraordinary and one-of-a-kind nightlife experiences, and with our global approach to finding the best the world has to offer, we are very pleased with the result. Having listened to what our fans want, we are now very happy to be rolling out the resulting Miami event to three UK towns, spreading the extraordinary experience throughout Great Britain.”

For more information and to vote for your local venue, go to www.facebook.com/SmirnoffGB