A rare test pressing by East Village, a signed gold vinyl box set by The Pop Group and test pressings from IDLES and Metronomy are among the prizes revealed for a charity auction at the Independent Label Market: London on Saturday (November 30th).

They are among an array of exclusives, vinyl rarities and test pressings that will be on offer at the Warchild Winter Appeal charity auction which includes items from Heavenly, Because, Mute, Partisan and XL Recordings plus a limited edition preview 12” by Thom Yorke. Other exclusives and highlights from this year’s traders include further advance copies, extended back catalogues and signed merchandise from Africa Express, Japan Blues, Marathon, One Little Indian, Partisan and Sonic Cathedral.

Head of Music at War Child UK Rich Clarke said: “A huge thank you to the Indie Label Market for raising vital money to support children affected by conflict across the world. And an equally massive thank you the labels generously donating super rare vinyl to the ILM charity auction. War Child hugely values the support and the continued dedication of music fans to its cause. Together we can continue to protect, educate and stand up for the rights of children affected by conflict.”

The annual Christmas event at Coal Drops Yard in King’s Cross with the London Brewers’ Market will run from 11am to 6.30pm.

There will be label DJ sets throughout the day in the beer garden. Spiritland will be hosting ILM DJ sets until 1am while The Standard will have music from 8pm to 12.30am.

For details go to independentlabelmarket.com. 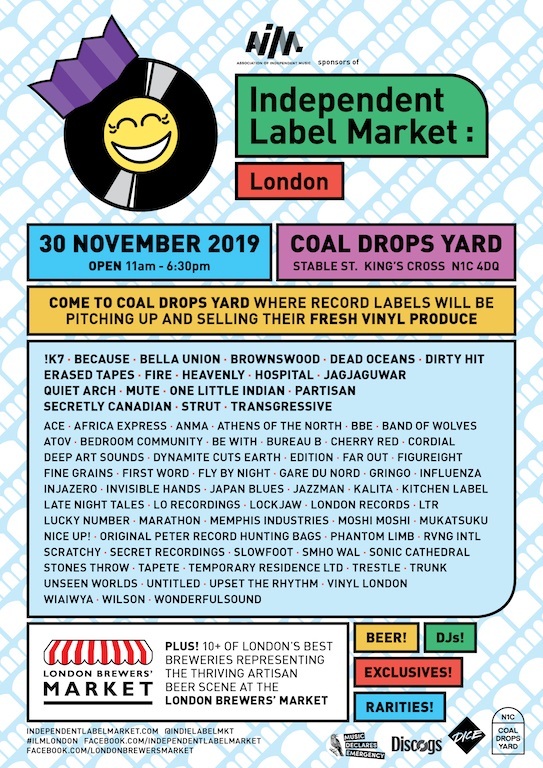