The advocacy of human rights in Iran will be highlighted in London when street artist Dave the Chimp creates a new mural at the Village Underground street art wall on Holywell Lane in Shoreditch. The British artist and illustrator based in Berlin is painting his depiction of human “beans” parading placards with positive slogans as a major contribution to the #NotACrime campaign focusing specifically on the persecution of Iran’s Baha’i religious minority.

Dave the Chimp’s work mixes cute and childlike styling with political messages. The mural will be accompanied by miniature versions of the mural across London. The project is being curated by Cedar Lewisohn. Lewisohn said: “I am extremely pleased to be a part of #NotACrime. I believe that art in public spaces can be a powerful force in reaching wide audiences. Dave the Chimp’s piece will take a complex political subject and make it understandable for people who will see it in London over the next few weeks, as well as the global audience online.”

Dave the Chimp added: “Street Art has always been a political act for me,” said, “a way to remind people there is freedom available for them if they are willing to believe in a better world and do the work needed to create that reality. And as Whitney Houston said: children and young people are our future, the unwritten story that can be truly amazing, just so long as they are given the freedom and education they need to be the authors of a better world. To deny young people education is to deny us all a brighter future.”

Maziar Bahari, a former Newsweek journalist who was jailed in Iran and became the subject of Jon Stewart’s film Rosewater, started the initiative. He said: “This campaign marries old and new forms of communication; street art, very similar to cave paintings, and modern social media activism. It will spark an important conversation. I’m grateful that we’re able to shine a light on how the Iranian government is mistreating the Baha’is as I believe it serves as a barometer for understanding whether Iran is ready to operate like a modern and rational government.”

The #NotACrime began in New York City in September 2015 with 11 murals on education equality and freedom of expression across the city. Leading street artists from around the world, including the United States, Brazil, Argentina, Italy, and South Africa all painted artworks designed to provoke conversation about the Iranian government’s long history of violating the human rights of its citizens. The campaign has spread to Rio de Janeiro and Brasilia, Cape Town and Johannesburg, and Sydney. London previously featured a mural by the polish artist Zbiok on the jailed Iranian cartoonist, Atena Farghadani, at the same Holywell Lane wall.

For more details go to notacrime.me. 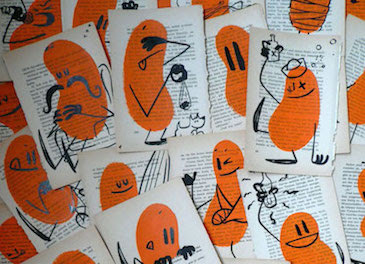