Danny Rampling will bring his club night Shoom back to London on Friday, November 8th. Electric Brixton will host with Danny behind the decks joined by Shoom regulars Farley & Heller plus ILONA. Detroit electronic music group Inner City will be special guests.

Inner City are best known for their early hits ‘Big Fun’ and ‘Good Life’, but 2019 is a new era for Inner City under the fresh formation of Kevin Saunderson, his son Dantiez Saunderson plus vocalist Steffanie Christi’an.

Shoom was inspired by Danny’s legendary trip to Ibiza in the Summer of ‘87 when he found the night to recreate the hedonistic experience found on the White Isle. Then he took over an intimate 300 capacity basement fitness centre venue at 56-58 Crown House Southwark, on December 5th that year.

Marketed with a simple smiley face logo - now rave culture’s most ubiquitous symbol - and a wide ranging music policy, Shoom’s reputation quickly grabbed a tight grip on the DJs and clubs of London, Manchester, and beyond, Shoom seemingly changed the face of youth culture and the house music scene forever.

For tickets and details go to residentadvisor.net/events/1288053. 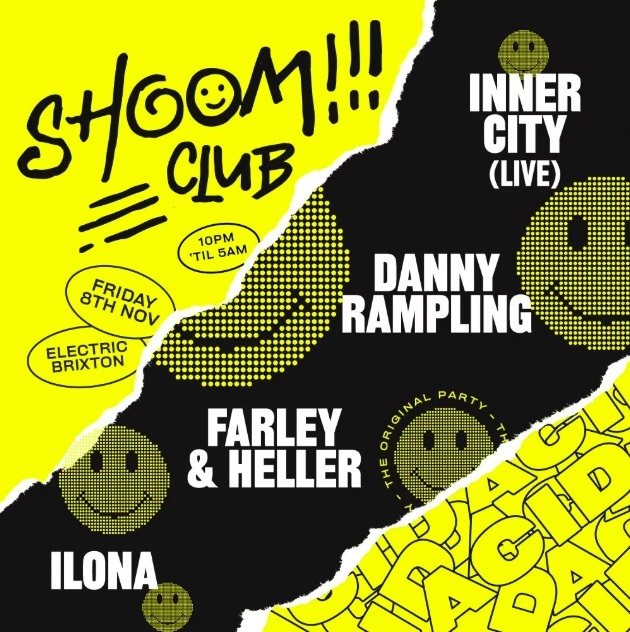