Birmingham’s BASS festival 2018 will mark 50 of reggae with a mix of music, arts, culture and heritage of the genre. From Thursday, October 4th to Wednesday, October 31st, Freddie McGregor, Toots & The Maytals, Grammy-winning producer Winta James, Carroll Thompson and Christopher Ellis will be involved in events.

BASS2018 also commemorates the 40th anniversary of the release of the iconic Steel Pulse album Handsworth Revolution with a celebratory public mural in Handsworth featuring the album artwork followed by a Q&A with original members of the band on Saturday, October 13th.

A four-week film series will see some of reggae’s classic movies played at The Mockingbird Cinema over four nights from Thursday, October 4th. Rocksteady: The Roots of Reggae with a guest performance by Christopher Ellis, The Harder They Come, The Story of Lovers Rock followed by a Q&A with Carroll Thompson, Homelands and Bruk Out will be screened.

There will also be a unique art exhibition which gives a platform for 100 reggae inspired posters, designed by artist and illustrators from around the globe.

BASS Festival is curated by Birmingham arts development agency Punch. Punch CEO Ammo Talwar MBE said: “As the festival approaches it’s twelfth presentation we are proud to herald the incredible achievements that Reggae has accomplished. As a music form it fights above it’s weight, and as a cultural entity you cannot imagine a world without it. BASS2018 allows us to give due acclaim to those in the Reggae world who have made it the potent force that it is.”

For tickets and details go to wearepunch.co.uk/bass-festival. 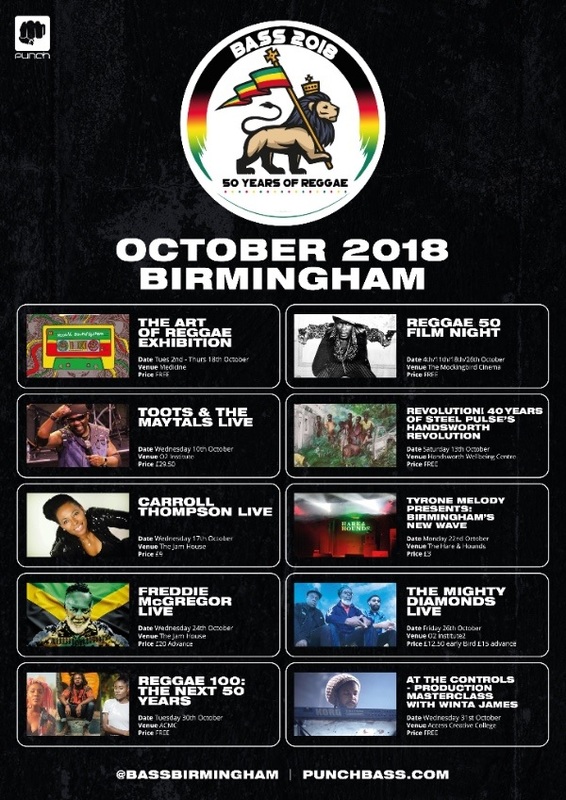