Culture Clash Round 2: Battle of the London Soundsystems
8

Hilarious music banter between prominent producers, an eager crowd and four bass-heavy soundsystems combined to shake The Roundhouse to its core at Culture Clash Round 2: Battle of the London Soundsystems. Metalheadz, Skream + Benga, Channel One and Soul Jazz Records went head-to-head over five rounds, each giving the system’s group of DJs the chance to mix for fifteen minutes before the crowd had their say over which was the best at the end of each round. With themes such as entertainment and selection, there was a need to appeal to the crowd on every level – resulting in a surprise victory after bouts of witty banter between MCs and plenty of foundation-breaking bass.

!(feature_l)http://relayer.s3.amazonaws.com/articles/spreads/4cbc90c7d2e0706b8c000031.jpg!The Roundhouse’s unique circular space makes for an ideal venue for Culture Clash. The soundsystems were arranged in a semi-circle towards each other with space directly in front of each stage and in the other half of the performance area for the crowd. Joining the contest during the “warm up” round, the beefy beats were already bashing out from the speaker towers. Soul Jazz Records had brought some serious Funktion 1 kit for crystal clear tunes taking in funk, deep soul, rocksteady and dancehall as the widest range of tunes. Previous winners Metalheadz, run by Goldie, offered drum and bass, dubstep and crack house while Skream + Benga had a focus on the genre they helped create: dubstep. Channel One featured Mikey Dread and Ras Kayleb to represent roots reggae but they looked to be suffering early on as they didn’t have the fanbase of Metalheadz or Skream + Benga made so obvious by the wild reaction to thier respective tune choices while Soul Jazz Records looked like they could out-perform Channel One based on the system. However, it was early doors and all to play for.

There were big personalities duking it out for pride 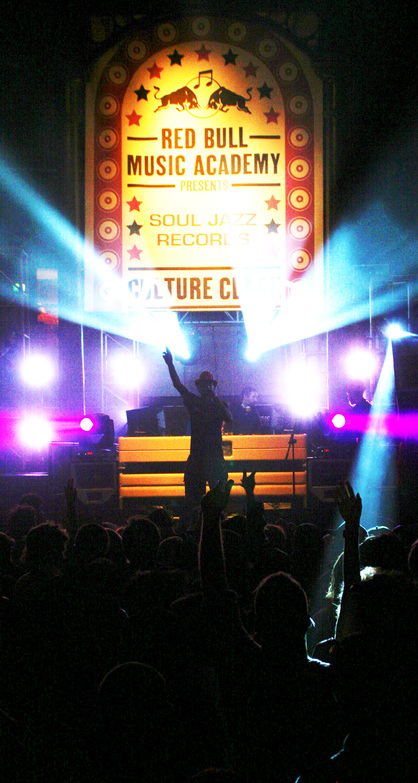 Very quickly it became apparent that there were big personalities duking it out for pride. The Metalheadz and Skream + Benga soundsystems seemed to have a score to settle and ferocious battle of words and tunes broke out. The Metalheadz, led by Goldie, used Skream and Benga’s tunes against them by dropping Magentic Man’s “Perfect Stranger” much to their chargrin, though it would be Goldie who would be left with egg on his face as he was first laughed at for being voted off Strictly Come Prancing and later his soundsystem failed when Storm’s first track ruptured the speakers leading to many jeers. The reigning Culture Clash champions had been looking impressive with guest appearances from Zinc and Andy C bashing out the tracks, however this technical error proved costly as the failings in the system itself were exposed. Benga + Skream seemed to take be taking the competition by sheer brute bass as they unleashed dubstep big hitter after big hitter much to the delight of the crowd, whipped up by a very vocal Sgt. Pokes. The Soul Jazz Records soundsystem’s clarity was only hampered by a lack of focus for their 15 minutes in each round – their skitting through bass heavy genres made them a hard crew to fully commit to. So while two systems were taking the fight to each other and the third was suffering from a lack of identity, it was left to the Channel One soundsystem to knuckle down and keep to its roots – its reggae roots.

Channel One knuckled down and kept to their reggae roots

!(feature_c)http://relayer.s3.amazonaws.com/articles/spreads/4cbc939fd2e0706b8c000037.jpg!Keeping the good time vibes alive and having a fun time on stage, especially at the appearance of a trombone to keep it their sound fresh, the audience couldn’t get enough of the bass-laden music that helped inspire much of what was played by Goldie’s cohorts and helped inspire the dubstep of Skream and Benga. And so it was to be that Channel One was hailed the winner thanks to the votes of the crowd, giving a thumbs down to the stars who occupy the spotlight and a thumbs up to the original innovators. Despite such a surprise win, one qualm with the Culture Clash is the five hours of music is not witnessed by everyone, and there is no way to enusre all at The Roundhouse were able to take part in each vote which could lead to eschewed results, but its a minor gripe. I could still feel the music of the Culture Clash shaking through my bones the day after event and the atmosphere was electric throughout. Roll on Culture Clash 3, and fingers crossed they can get the Iration Steppas down to test their mighty set up.