Straddling that limbo land between classical and popular music, New York collective Bang on a Can All-Stars brought with them a real treat with a live performance of Brian Eno’s seminal ambient work Music For Airports this February. Particularly lavish was its execution in the best concert hall in the country: Birmingham’s Symphony Hall — one of only two dates in the UK. Well established as one of America’s most innovative and adventurous ensembles, the Bang on a Can All-Stars balanced the program with pieces by legendary minimalist master-craftsman Steve Reich, co-founder of the collective and composer David Lang and even Sonic Youth’s very own experimental/noise/indie guru Thurston Moore. 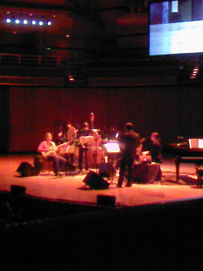 Already an astounding onslaught of minimal-experimental delights, a program like this certainly didn’t fail to meet the expectations of a fairly well attended audience (which interestingly enough was made up of either “25 and under” or “50+” categories and not much in between). Eno’s four part Music For Airports had been variously arranged for percussion, electric guitar, double bass, cello, piano, clarinet with some synthesiser parts. The coining of the term ‘ambient music’ by Brian Eno as music “as ignorable as it is interesting” and the pivotal influence of the original piece on experimental and electronic music (such as Aphex Twin’s Selected Ambient Works Vol I&II, early Autechre, Boards of Canada) were mere undertones to this performance, the blinding textural and harmonic beauty of the music itself proved its own worth. The arrangement turning a timbral twist to the synthesised phasing and looping of the original, a very fitting reversion to classical instruments for us all to enjoy. With suitably slower-than-life/larger-than-thou visuals provided by yeastCulture and the perfect acoustics of the venue itself, it was frankly speaking, a pure audio-visual aesthetic pleasure explosion, if you happen to be that way inclined.

A spiralling near-symmetry of repetitive phasing, it in turn produced understated yet immensely beautiful tones of maddening proportions.

Steve Reich’s 18 minute “Electric Counterpoint for solo electric guitar was a mesmerizing haze of minimalist mastubatory joy. Ten guitar and two bass parts were pre-recorded by the soloist Mark Stewart, with a final 11th guitar part played over the top in the live performance. A spiralling near-symmetry of repetitive phasing, it in turn produced understated yet immensely beautiful tones of maddening proportions. David Lang’s piece “Sunray” for the full ensemble started off hinting at a freaky nursery, building up around an destabilising angular repeated motif and gaining increasing dominance and slyness right until its sharp and sudden finish. Very nice. Less palatable to me, were the two pieces by composer and jazz clarinetist Don Byron, whose compositions used unnerving rock drumming, guitar and (double) bass playing which came across unnecessary in the context, and also included answers to questions of ethnic identity directed at the All-Stars members themselves, such as “Idaho!” or “Helsinki!” actually exclaimed by the performers in the piece “Show Him Some Lub” and felt intermittently like a GCSE drama piece. 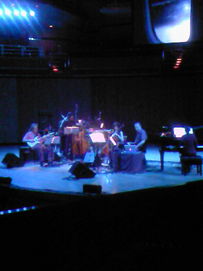 Thurston Moore’s “Stroking Piece #1” began with scrapey double bass-bridge scratching and sparse drumming and developed into a dynamic barrage of noise. This appeared with a devilishly sly sense of foreboding and made me wonder when the time would come, some distant point in the future, when we will sit in the finest concert halls of the world and listen politely to ear-raping noise music. These thoughts aside, its Bang-on-mate! to Bang-on-a-Can All-Stars for delivering Eno’s Music For Airports and other treats on our doorstep, such floating contemplation was a rare and educational treat. Bang On My Can anytime!