Multi-award winning Yemi Alade is a Nigerian Afro Pop/R&B artist, songwriter, composer, actress and entertainer. Her third album, Black Magic was released in December, and now she has dropped a video for ‘Go Down’. We spoke to Yemi about her career and latest release.

My style of music is best described as Afropolitan; a blend of the Western sounds and Afrobeat with Highlife

First up, tell us bit about yourself - what first got you into music?
I fell in love with music at a tender age and wrote my first song in primary six (I was barely 8-years-old), I was the only teenager chorister in the adult church. I joined a girl group when I was 15 years old but still I never really wanted to be a professional musician. Well, I went professional in 2009 when I won a talent show. There was no denying that I had found my calling.

Were there any particular bands or artists you took inspiration from when you were establishing your sound?
I listen and enjoy any genre of music that makes me sway gently or dance frantically (lol), but my playlist in early years were more R&B and Pop; Usher, Mariah Carey, Brandy, Destiny’s Child, Boys2men. The closest I got to Afrobeat was watching my dad get dressed for work every morning while listening to King Sunny Ade’s music (Afro Juju).

How would you describe your style?
My style of music is best described as Afropolitan; a blend of the Western sounds and Afrobeat with Highlife and it also transcends to my fashion, etc.

You were twice a Winner of the MTV Africa Music AWARDS (MAMAs) for Best Female in 2015 and 2016. How did that feel?
Unbelieveable, is that really true? Well, looking at the trophies on my shelf defintely reaffirms that! I am absolutely grateful to God and music lovers out there. 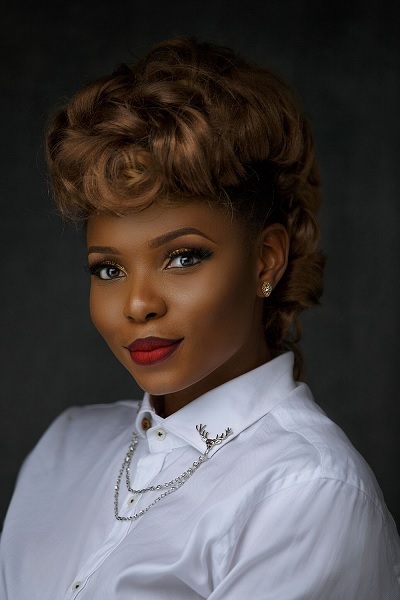 What do you think contributed to those wins and why were they significant for you?
I think everything; whether big or small counts. The music, fashion, brand, the consistency, delivery and definitely God’s timing. Being presented such prestigious awards somehow crown your efforts and make you feel like you aren’t alone in the hustle. I think it is a morale booster in every sense of the word.

Your album, Black Magic, was released in December 2017. Tell us about its themes.
Yes, Black Magic is my third album. Black Magic is a celebration of where I started my career to where I am now. It is a call to those who believe in themselves to push until something happens. Most times the events that unfold in my life feel like pure magic and I want to share that experience through music and deeds.

When did you write it and where did you record it?
Black Magic is a compilation of about 15 songs recorded in different parts of the world over the period of approximately a year amidst my USA and Nigerian tours.

How did the album evolve over that time?
I pretty much was inspired by personal experiences, 3rd party/observer experience as well as fiction.

What songs are you most proud of?
I am proud of every single song but there is something about “Kpirim”, “Yaba left” and “Bread and butter”.

What are your hopes for the album this year?
Black Magic has over a million streams on Spotify and is doing very well on other platforms. I hope to connect to my existing audience more as well as new audiences. I will be releasing more videos for most of the songs this year.

What are your plans for 2018? Where can we see you on tour?
2018 is a year of HITS ONLY! I will be touring Europe in April, but my first stop will be london on the 20th of April.

Watch the video for ‘Go Down’ on YouTube below. For Yemi Alade news and tour dates, visit yemialadeworld.com.